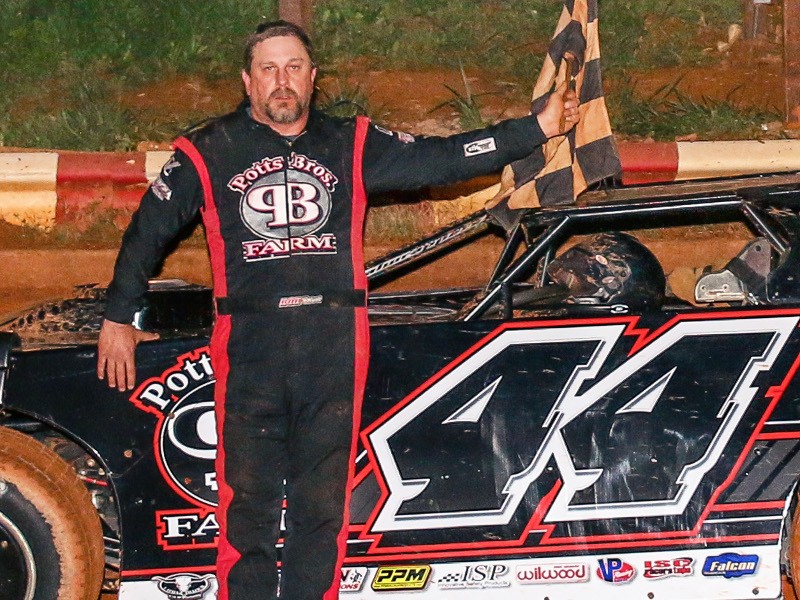 Rod Roberts came out on top of a back and forth battle for the lead to win Saturday night’s Hobby 602 feature at Georgia’s Winder-Barrow Speedway.

The racing was intense for the start between pole sitter Mike Davison and Nick Sellers, as the two raced side-by-side for the opening half lap. That battle ended when Sellers’ car slipped in turn three, allowing Davison to get away with the lead while Roberts moved to second.

The first caution flag of the night flew moments later when Sellers car slowed to a halt on the front stretch.

Back under green, Davison again grabbed the lead, with Roberts in pursuit. Roberts would get to the inside of Davison’s car moments later, and the two began fighting back and forth. Roberts could pull alongside the leader, but each time Davison held the measure at the start/finish line.

That battle halted temporarily when a spin in turn two brought out the second caution of the event.

Davison again powered to the lead on the restart, but Roberts soon reeled him in, and the two began racing side-by-side for the lead. That fight came to a head when the two made contact while racing alongside each other in turn three, sending Davison’s car spinning and bringing out the final caution of the night.

On the restart, Roberts pulled away and went on to score the victory unchallenged.

Tyler Woods finished in second, with Joe Yarborough in third, Sellers in fourth and Davison in fifth.

In other action, Chris Woods held off Nick Sellers for the Limited Late Model feature victory. John Anderson followed in third, with Will Harris in fourth.

Jeff Casper was the winner in the Stock V8 feature, with Mark Chancey, Junior Carter, Dustin Moore and Trey Pilgrim rounding out the top five.

Brian Shaw topped the Stock 4B feature to take the win over Charles Earnest in second, Tommy Shipman in third, Bubba Brady in fourth and James Sargent in fifth.

Winder-Barrow Speedway is schedule to return to action on Saturday, April 3. For more information, visit WinderBarrowSpeedway.com.