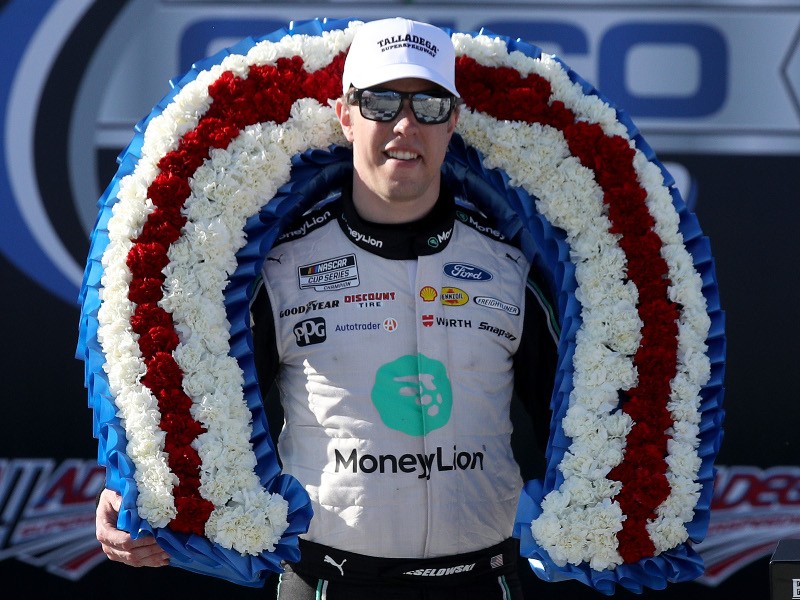 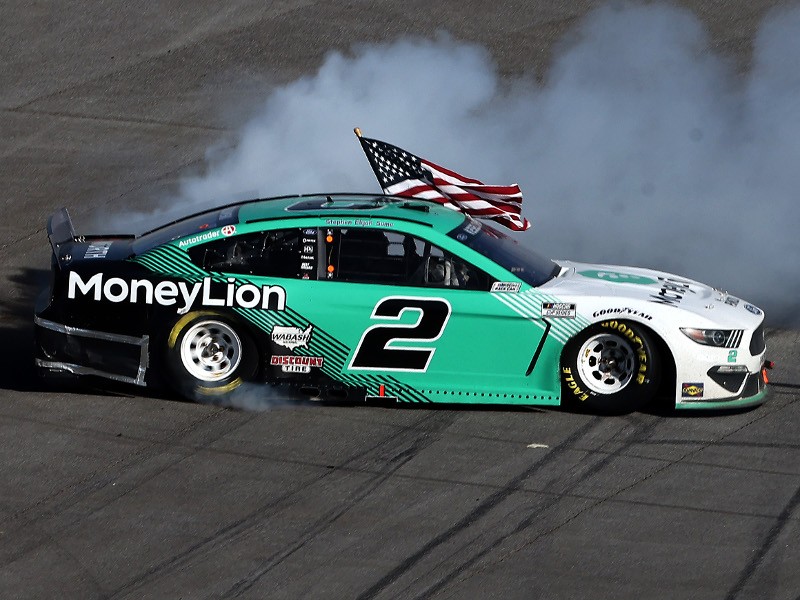 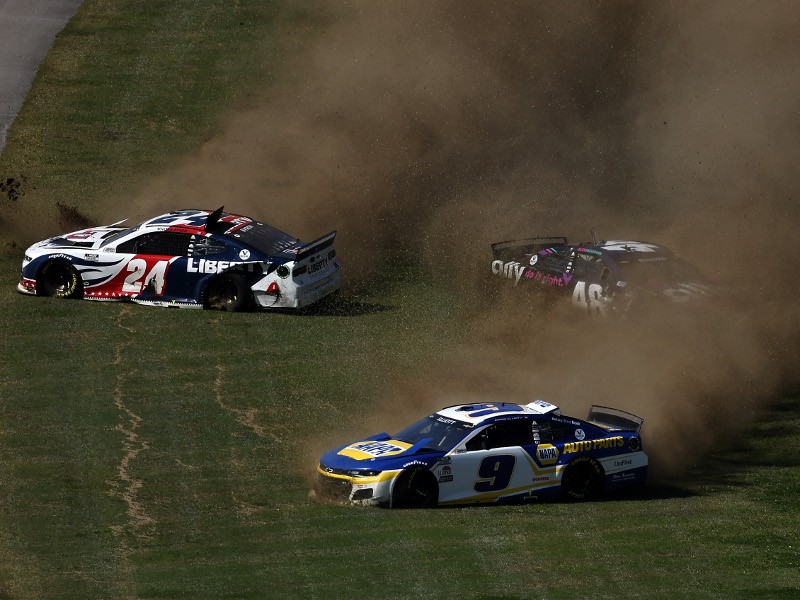 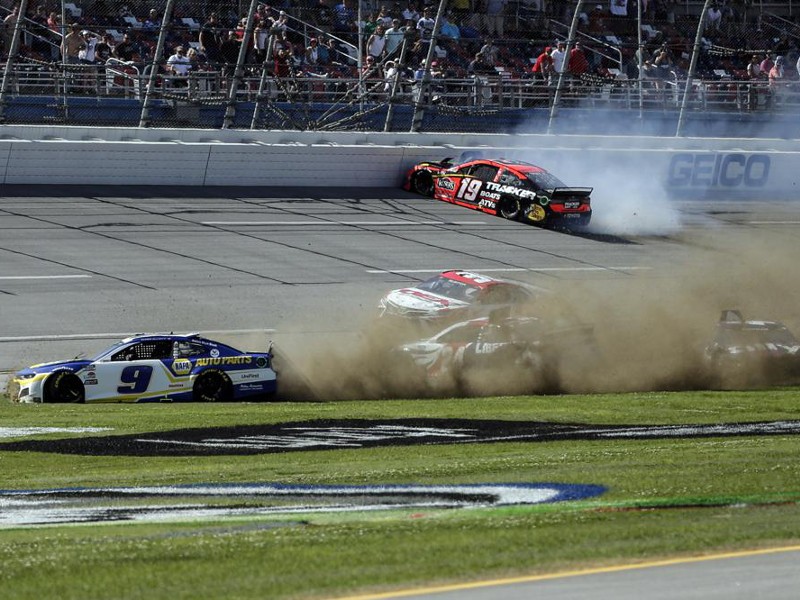 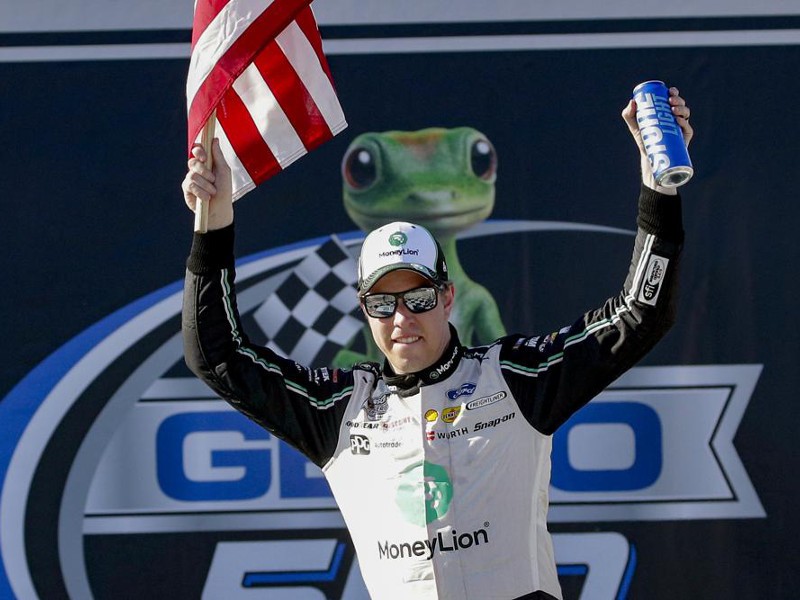 For Brad Keselowski, the path to victory lane at Talladega Superspeedway on Sunday involved leading only one lap – the last one.

When leader Matt DiBenedetto moved high to block a run by Ryan Blaney on the final lap in overtime in turn one, Keselowski gunned his No. 2 Ford Mustang to the inside, setting up a drag race down the backstretch.

Keselowski cleared DiBenedetto to take the lead, and then held off a big run from William Byron and Michael McDowell coming to the finish line to score the victory in the NASCAR Cup Series Geico 500.

“What an awesome day today to bring the MoneyLion Ford Mustang into Victory Lane,” Keselowski said. “The whole race I had a couple opportunities to take the lead, but I just kept thinking, ‘Man, keep your car in one piece.’ We’ve been so close here and it just didn’t seem to want to come together here the last few years and I’ve been on kind of a four-year drought here, but it’s nice to get number six.”

It gives Keselowski his first NASCAR Cup Series win of the season and the 35th of his series career. It also gives Team Penske three wins so far on the season.

In addition, it gives Keselowski six career series wins at the Alabama speedway, tying him NASCAR Hall of Famers at the top of the all-time winners list at Talladega.

“I would have never dreamed I’d tie Jeff Gordon and Dale Earnhardt, Jr. here,” said Keselowski. “That’s something. Those guys are really legends. I’m just really proud of my team.”

Keselowski had to bounce back from being involved in the first of two multi-car crashes on the day. That crash saw his teammate, Joey Logano, sliding on his roof into turn three at the end of the first segment of the race.

As the field raced down the backstretch on lap 59, contact between Denny Hamlin and Ricky Stenhouse, Jr. sent Hamlin’s car into Logano. Logano’s Ford then spun, became airborne and made slight contact with the car of Bubba Wallace. The car then slid on its roof into the third turn, where it turned back onto its wheels.

Logano was uninjured, but his day was over.

“I guess I don’t know exactly what to think. It is a product of this racing,” Logano said. “On one hand I am so proud to drive a Cup car that is safe, and that I can go through a crash like that and get out and speak about it. On one hand I am made about being in the crash and on the other I am happy to be alive. On another hand I am wondering when we are going to stop because this is dangerous doing what we are doing. I got a roll bar in my head. That is not okay. I am one hit away from the same situation Ryan Newman just went through (in Daytona in 2020). I just don’t feel like that is acceptable. A lot of it is the big spoiler and the big runs and all the pushing.

“It is nobody’s fault. Denny (Hamlin) is trying to go and the 47 (Stenhouse) is trying to go. It is a product of this racing. We have to fix it though. Someone already got hurt and we are still doing it, so that’s not real smart. At the same time, I am appreciative of driving a car that is this safe and what Team Penske has done for the safety of these cars so that I can live to talk about it and go again.”

Meanwhile, Keselowski had the crash missed but was clipped by another car, sending him spinning in turn three.

“We had an accident there early and they recovered and got it fixed up to where I could keep running,” said Keselowski. “My crew chief, Jeremy Bullins, had a lot of confidence. I told him, ‘I want to come in and put four tires on this thing,’ and he said, ‘Yep, go ahead.’ And that really helped a bunch at the end.”

The second multi-car crash occurred at the end of the second segment of the race, when contact between Hamlin and Martin Truex, Jr. in the tri-oval on lap 118 sent several cars spinning, including Truex, Chase Elliott, Alex Bowman and William Byron.

Byron would recover from the incident to finish in second.

“It was a good race for us,” Byron said. “I felt like we had a shot there at the end, just not quite enough racecar to lead the race I felt like. But it was a really good day. We had some damage, but the guys did a great job fixing it. We’ll go to Kansas (Speedway) and hopefully have a really fast car there.”

The final caution flew when a cut tire on Truex’s Toyota left debris in the tri-oval with just four laps to go, setting up the overtime finish.

“I felt like it was pretty close,” McDowell said. “I am just so thankful to everybody at this Front Row Motorsports team. We have fast superspeedway cars. This Ford Mustang was fast. It has been a great season for us. I really felt like I was in a good spot again working with Brad (Keselowski) and drug back off of him coming off of turn 4. I thought I would have the run but just didn’t suck him down enough. It was a great run and I am glad there is another Ford Mustang in victory lane.”

Kevin Harvick finished in fourth, while DiBenedetto hung on for fifth after losing the lead on the final lap.

For the Grass Valley, California driver, it was another just miss at his first career win and the 100th career win for the Wood Brothers Racing team. DiBenedetto raced near the front all day, leading five times for 28 laps on the day.

“Our day will come. I’m just lucky to drive this thing and have the support from everybody,” said DiBenedetto. “The fans, they are so awesome. Driving for the Wood Brothers is really a dream come true. Gosh, it’s hard to come so close to so many of these things. The Fords are so fast. They believe in me, the whole Ford camp. They do an excellent job. The Mustangs are great. Motorcraft, Quick Lane, Menards and all of our vendor partners, I tell you that because all those people believed in me and I love what I do. Our day will come. We’ll get there. I just appreciate the support from everybody.”

Dawsonville, Georgia’s Chase Elliott fought with handling on his No. 9 Chevy all day before receiving damage in the lap 118 crash. He soldiered home to a 24th place finish.

Several cars, including Erik Jones and Ross Chastain – both of whom spent time leading the race in the later stages – occurred in the tri-oval behind the leaders as the field took the checkered flag. Chastain was credited with a 16th place finish, with Jones in 27th.

Series points leader Denny Hamlin led the most laps on the day, pacing the field three times for 43 laps. But a pair of pit road speeding penalties during a round of green flag pit stops on lap 92 left him a lap down before the lap 118 crash left his No. 11 Toyota damaged. He finished 32nd, three laps down.