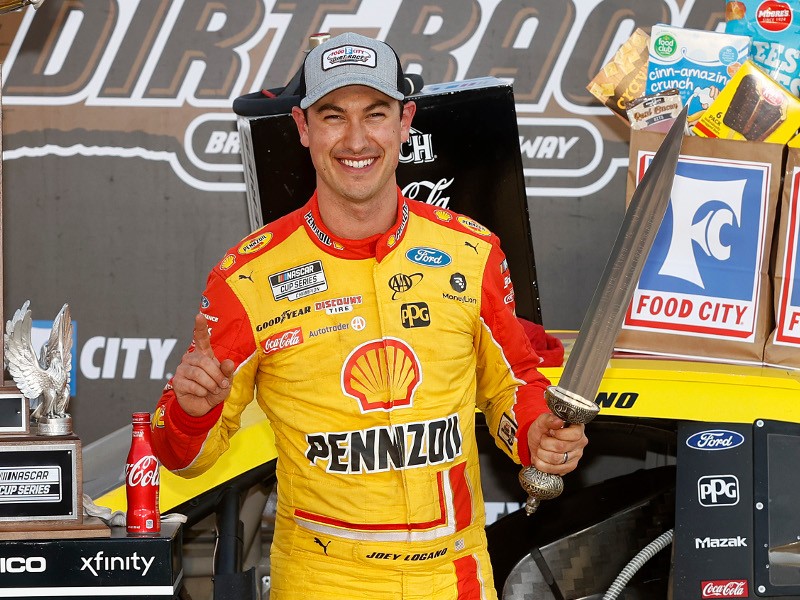 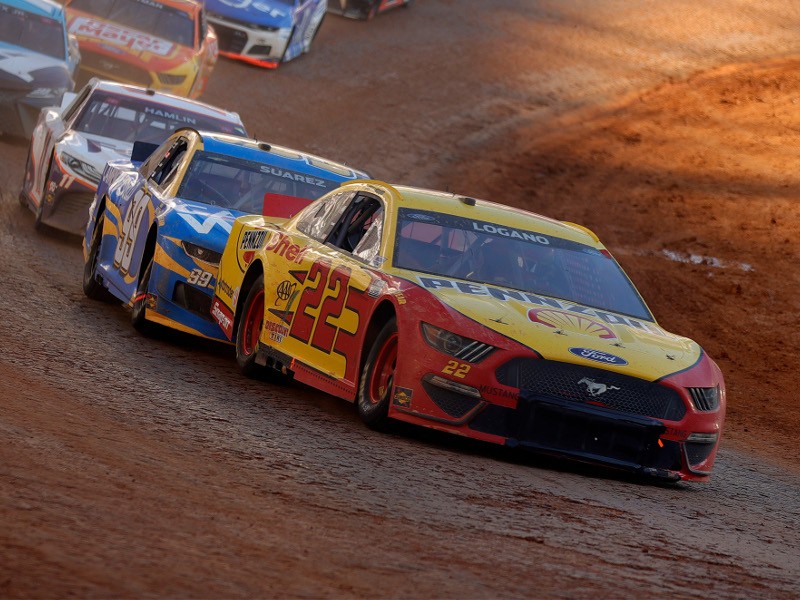 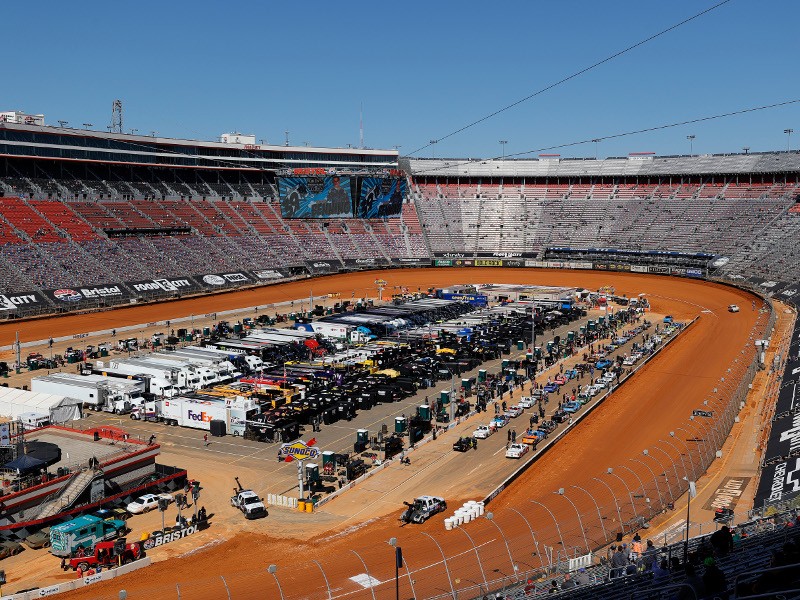 Joey Logano got all he could on the final restart to edge out second place Denny Hamlin, and then moved his No. 22 Team Penske Ford away to gap the field. From there, he ran the last lap and a half unchallenged to score the victory.

“This is obviously my first dirt win,” said Logano. “It’s only my fourth dirt race ever, so I had a lot of fun trying to figure it out. I was having a blast racing, trying to find the right lanes, moving around, watching Denny (Hamlin) figure out the top after they watered the track. I was like, ‘Oh no, now what do we do?’ So, just a crazy moment.”

Logano becomes the first series winner on a dirt track since Richard Petty won on September 30, 1970 at the North Carolina State Fairgrounds.

Bristol’s dirt race, which saw speedway officials add clay on top of the regular concrete racing surface on the half-mile Tennessee speedway, is the first time the series has raced on a dirt track since then.

It marks Logano’s 27th career series victory, and it gives the series seven different winners in the first seven races of the season.

“It was definitely a challenge. When they watered the track the last stage that kind of changed everything,” Logano said. “Denny and I had a heck of a race because he found grip up top and I was like, ‘Well, I don’t know how to do that,’ so I had to go up there and try to figure that out to defend the lead position and then eventually just worked the lapped cars. That was very hard as well as it should be. Everybody is racing to stay on the lead lap, so I was able to get through them as needed and, of course, the late-race caution but what an amazing team.

“Everyone at Team Penske really put together some really good cars to come here and wing it. That’s what this is about. Nobody really knew what to put in the car and we were able to adjust the right way throughout practice and get into Victory Lane. It’s great.”

It’s the third win at Bristol for Logano, but his first in the spring race at the track.

“I finally won a spring race. I guess we needed dirt,” said Logano.

Behind him, Hamlin’s car slid wide on the final restart, allowing Ricky Stenhouse, Jr. to slip by and take home second.

“I just couldn’t get going, couldn’t get the turn in the race car that we needed,” Stenhouse said. “But we made a ton of adjustments and we kind of went back and forth overnight of what we were going to do. (Kyle) Larson and I came out and hung with the track crew. Steve Swift and the boys did a great job of getting this thing raceable today with all the rain and all the challenges that they had.”

Hamlin held on for third.

“Man, I thought I had a shot there,” said Hamlin. “I cut the 22 (Logano) too many breaks there when he was cutting us off. They had a little better car, it looked like, there in the long run. Proud of this whole team. We’re third-best again.”

Daniel Suarez controlled the race for much of the second segment, and came home in fourth, despite having almost no experience on dirt coming into Monday’s race.

“To be honest, I had no idea what I was doing. But we’re having fun,” Suarez said. “Everyone at Trackhouse Racing did an amazing job. This is the second week in a row that we’ve had very fast race cars capable of running in the top-5, top-10. I couldn’t be more proud of all these guys (like) Justin Marks, Ty Norris, and everyone that helps in this program.”

Martin Truex, Jr. dominated much of the race, leading for 126 laps, winning the first segment of the race in the process. He would lose the lead on lap 135 to Suarez.

Truex, who won the NASCAR Camping World Truck Series race earlier in the day, worked back into the thick of the battle for the win going into the overtime restart. But a cut tire on the drop of the green flag relegated him to an 18th place finish.

While the majority of competitors came in with little experience racing on dirt, their fortunes took a turn for the good when the two heavily favored dirt experts in the field – Kyle Larson and Christopher Bell – saw their races go south in the same on-track incident.

It occurred on lap 52, when Bell spun from second and was hit in the door by Larson. Seconds later, Ross Chastain’s Chevy piled in, while Chase Briscoe and Stenhouse also received slight damage.

Bell and Chastain’s cars were too heavily damaged to continue, while Larson’s car underwent extensive repairs and was able to continue. He would finish five laps down in 29th.

There were 10 cautions on the day, including a number of multi-car crashes. The first incident occurred on lap 41, when Aric Almirola’s Ford clipped the inside of turn four, sending him spinning. He was struck moments later by Anthony Alfredo, with Corey LaJoie and Shane Golobic caught up as well. That led to a red flag condition to clean up the scene.

Six laps later, a seven car incident brought the caution out again after Newman spun off of the front bumper of Byron. Teammates Chase Briscoe and Kevin Harvick made contact while trying to avoid the incident, while Cody Ware, Chris Windom, and Quin Houff spun behind.

The final caution of the day flew with four laps to go when Mike Marlar spun on the front stretch with a flat right rear tire, setting up the final restart.

While the Bristol dirt race was the most anticipated race of the first part of the NASCAR Cup Series season, fans can expect more of the same next year. Track officials announced the race will return for the 2022 season shortly before the beginning of the final segment of Monday’s race.