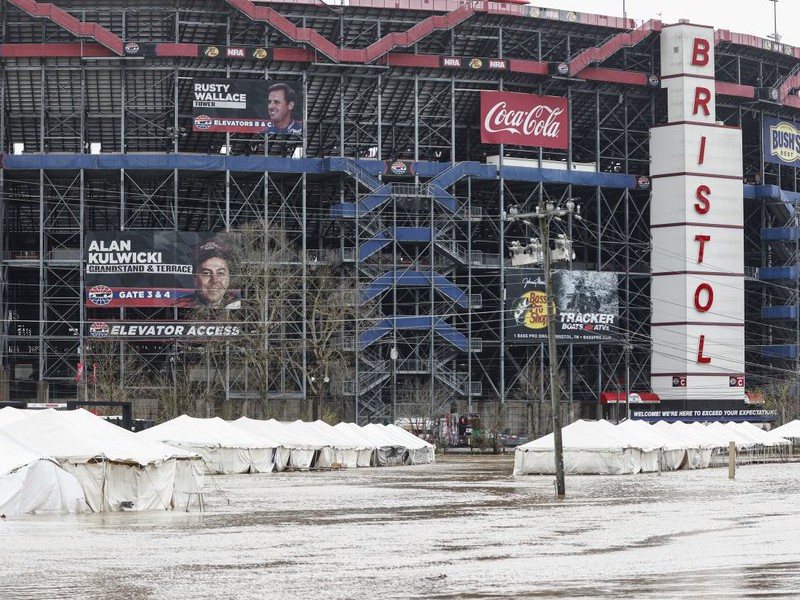 BRISTOL, Tenn. (AP) — NASCAR's hyped return to dirt is instead a muddy mess on hold at least until Monday.

Torrential rains flooded campgrounds and parking lots surrounding Bristol Motor Speedway and created a rut for NASCAR far deeper than anything the Cup Series drivers encountered on the track.

NASCAR canceled all Sunday activity because even if Bristol's converted dirt track could eventually be readied for night racing, the entire facility was a swampy mess. Grandstand seats that had been covered in dust were caked in mud, while pit road and the apron around the 0.533-mile bullring held several inches of standing water.

After 2 1/2 inches of rain fell across “Thunder Valley,” NASCAR made an atypical decision to call an early washout. The first Cup Series race on dirt since 1970 was rescheduled for 4 p.m. Monday; trucks were set to run at noon.

Somewhere, Tony Stewart likely was having a hearty laugh at Bristol's expense.

Stewart successfully hosted seven Truck Series races at his Eldora Speedway dirt track in Ohio, but when Fox asked NASCAR to put a dirt event on the Cup schedule, the date instead went to the concrete bullring at Bristol. An incensed Stewart declined to bring the Trucks back to Eldora this year out of spite and has sat back and watched from afar as Bristol attempted to tackle the challenges of a dirt race.

He openly fretted that a bad show at Bristol would damage the future of NASCAR dirt racing — and NASCAR itself seemed to admit it was a valid concern.

“We need this show to be great," Scott Miller, NASCAR's vice president of competition, said Saturday.

Stewart, who has insisted Eldora can successfully host the Cup Series, declined to comment Sunday when reached by The Associated Press.

“I'm not getting my hands dirty,” he said.

In fairness to Bristol parent company Speedway Motorsports, its CEO has been unafraid to take risks and spend considerable money in an effort to bring new energy into the sport. Marcus Smith converted centerpiece Charlotte Motor Speedway into a hybrid oval and road course that in three years has become one of the more popular events on the NASCAR schedule and last season added IMSA sports cars to enhance the weekend experience.

So Smith was all-in on offering Bristol for the Cup experiment on dirt, and his staff spent six months converting the concrete oval with 2,300 truckloads of red Tennessee clay. The track was ready in time to host the Bristol Dirt Nationals a week ago, when Super Late Models, Sport Mods, Modifieds and 602 Late Models raced largely without issue.

Kyle Larson and Austin Dillon competed and NASCAR leaned on both for guidance during this weird weekend.

Issues began to crop up Friday when Cup and Trucks held their practice sessions. The dust that kicked up from the dirt was thick, but the main concern was the durability of the tires provided by Goodyear. Drivers reported significant wear down to the cords on their tires and the 3,400-pound stock cars were tearing up the track surface.

NASCAR made tweaks to in-race procedures to allot additional time for track prep and granted teams an additional set of tires for the race. When rain stopped Saturday, the trucks were sent out to start heat races, but it took just one lap for the rain-soaked track to splatter windshields with a thick layer of mud and cake the front grilles — putting every competitor into a blinding situation with a fear of an overheating engine.

Larson felt the track conditions at the start of the heat races would have created the best dirt racing NASCAR had ever seen, but the cars had not been transformed for the event.

“If dirt racing became a thing, I think we could develop a tire that could handle the loads at a track like Bristol, and this kind of dirt, they could stay together and put on good racing,” Larson said Sunday.

“And if dirt racing is a thing, then maybe we should develop something where we don't run with windshields and we can change around the radiators so that we could have raced in Saturday's conditions."

A week earlier, Larson led a feedback session on track prep during a driver meeting at the Dirt Nationals and, as one of the top dirt racers in the country, he is one of the most knowledgeable on site and willing to advise both NASCAR and the track staff.

“Now that Smoke isn't here, I'm the guy who probably has the most experience,” Larson said, referring to Stewart by his nickname. “A lot of people in NASCAR don't have a lot of dirt experience, and that might go for many of the people even working on the track.”

He thought the Dirt Nationals went well and Bristol had done a great job converting the track.

“I don't think Bristol has done anything wrong. I know it looks bad with the dust from Friday practice,” Larson said. “But I really think that it comes down to our cars are 1,000 pounds heavier than anything that ran here last weekend and our tires are narrow and hard — that's just a recipe for how this has ended up.”

Larson hasn't given up on Monday's rescheduled race still being a decent show, and he wants critics to give Bristol a break.

“Eldora has races all throughout the year and the weather is typically fine when they hold those events," Larson said. "This is a makeshift track in the mountains and it is always raining in the spring.

“People need to understand this is not how dirt racing is and I think they need to try and appreciate how hard this is to pull off. I don't think it is a black eye on Bristol or dirt for Cup. Sure, there's a lot of other dirt tracks we can run on that has really good dirt and a great track prep crew that knows the track, but a lot of work went into making it happen here and I still think it can be a great event because Bristol was awesome last week.”