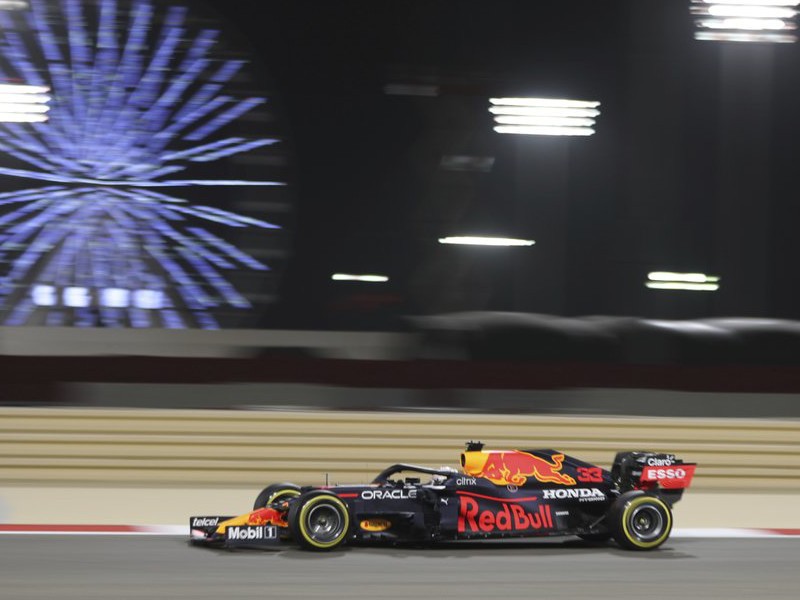 SAKHIR, Bahrain (AP) — Max Verstappen started the Formula One season on the front foot Friday by clocking the fastest times in the first two practice sessions at the Bahrain Grand Prix.

The Red Bull driver was .095 seconds ahead of McLaren’s Lando Norris and .235 clear of world champion Lewis Hamilton’s Mercedes under the floodlights at the desert track in Sakhir.

“Now we have to show what we can do in qualifying,” said Verstappen, who has taken only three career pole positions because of Mercedes' dominance since 2014. “I think it’s going to be even more windy (on Saturday) so it will be even more difficult to drive.”

“It felt like we're still not quite there with the car's balance,” Bottas said. “(We have) work to do if we want to fight for the pole and the win.”

Fernando Alonso, who came out retirement to replace Ricciardo at the Alpine team, had a tricky evening and managed only the 15th best time in the second practice.

Veteran Kimi Raikkonen span his Alfa Romeo and hit a wall early in the evening session, but the 41-year-old Finn managed got the car back to the team garage without too much damage.

Verstappen won the final race last season with a commanding drive at the Abu Dhabi GP. The 23-year-old Dutch driver also did well in preseason testing this month, offering hope that Red Bull can challenge Mercedes much more strongly this year.

“We have a hill to climb, but we're staying positive,” Hamilton said. “We thought Red Bull would be as fast as they are ... they are leading at the moment. McLaren are looking great and it's great to see them taking a step.”

There is a third and final practice session on Saturday ahead of qualifying.

Bahrain is the first of a record 23-race season.

In Friday's first practice, Verstappen was .298 seconds ahead of Bottas and .503 clear of Norris, with Hamilton just behind Norris in fourth spot.

Hamilton is looking to win a record eighth F1 title to move one ahead of Michael Schumacher, whose 22-year-old son Mick Schumacher is making his F1 debut with Haas.

He finished 18th in the second session and 19th in the first.