Cornelia seeing rebirth of downtown thanks to entertainment district designation 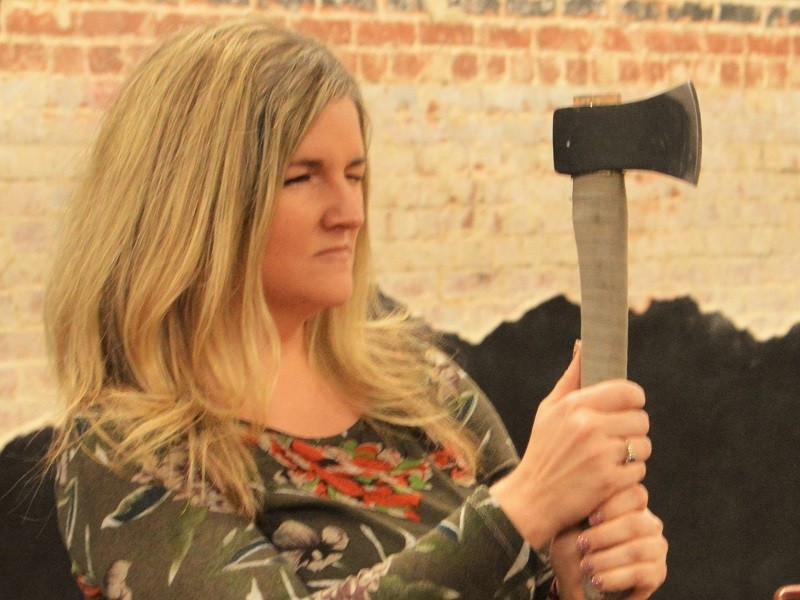 Lauren Coffee takes aim at the target inside The Axe Armory in downtown Cornelia.
Rob Moore 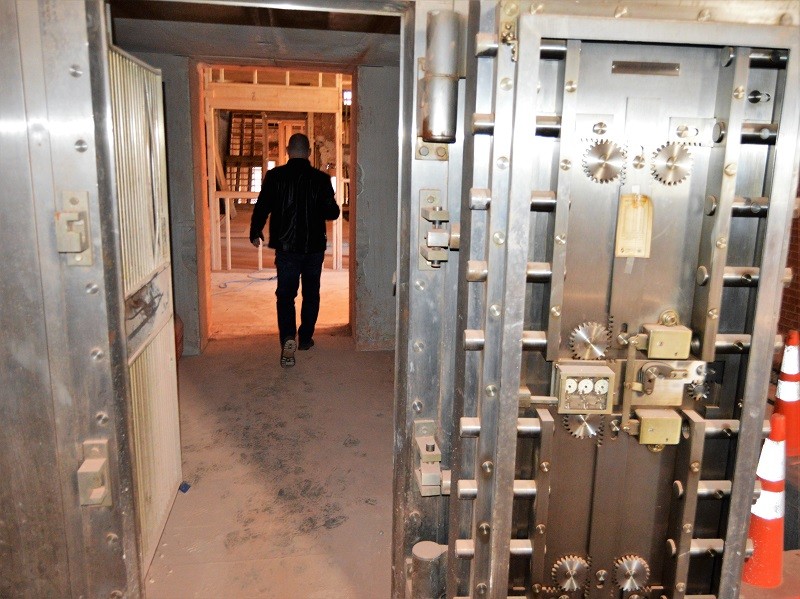 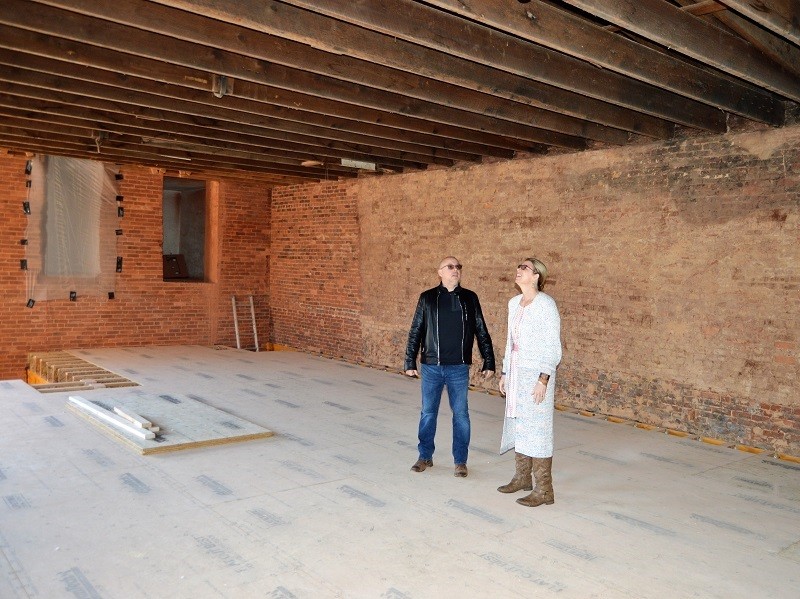 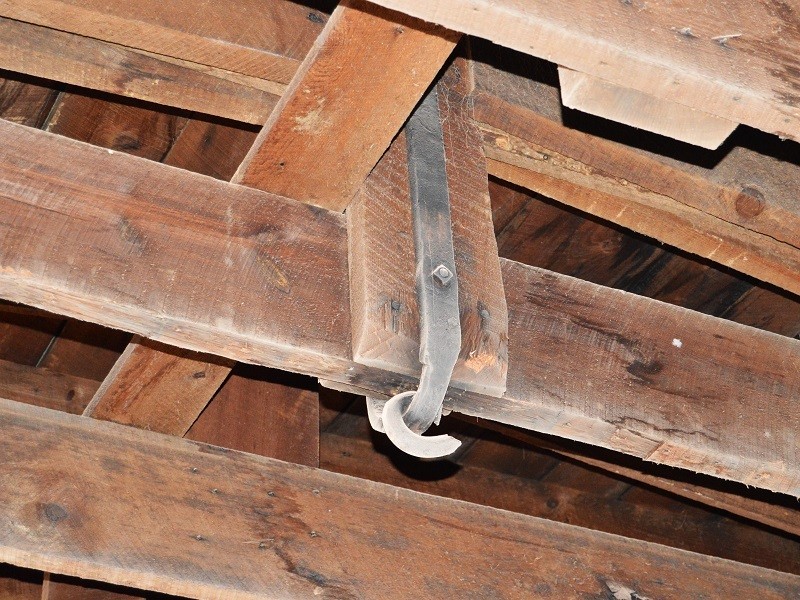 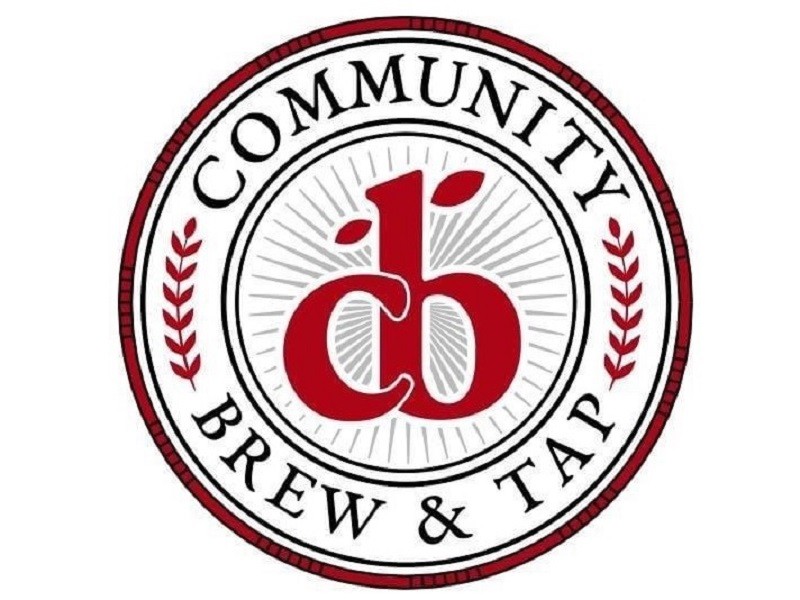 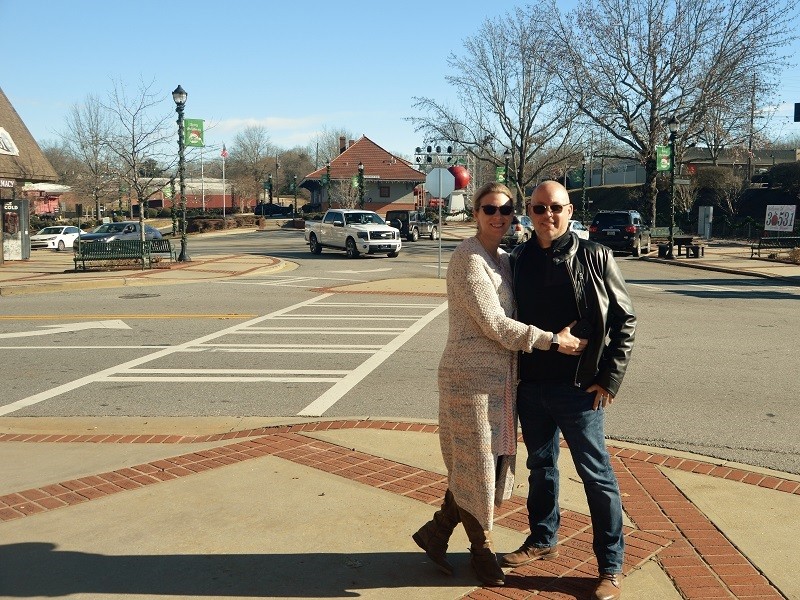 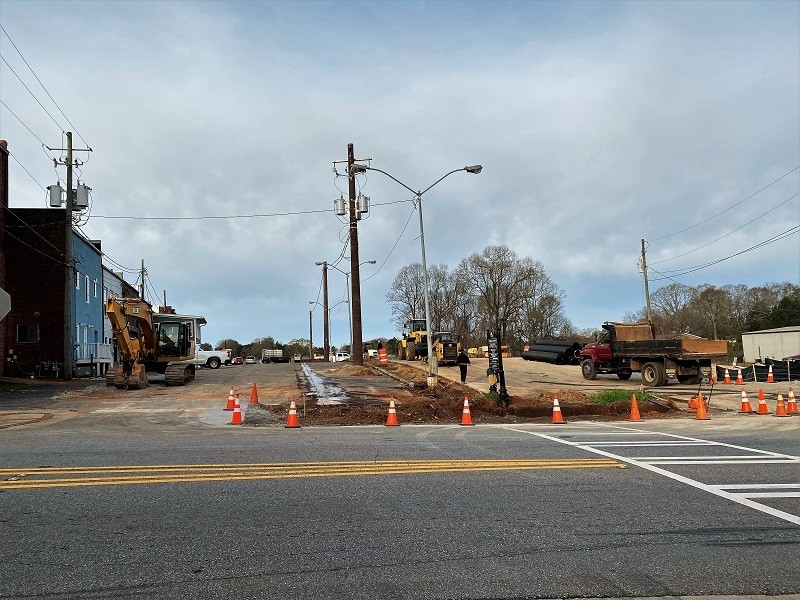 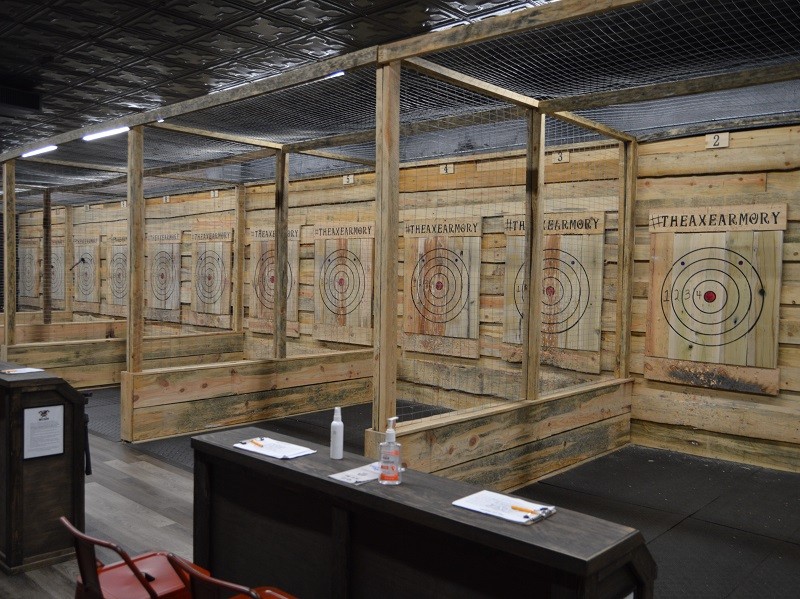 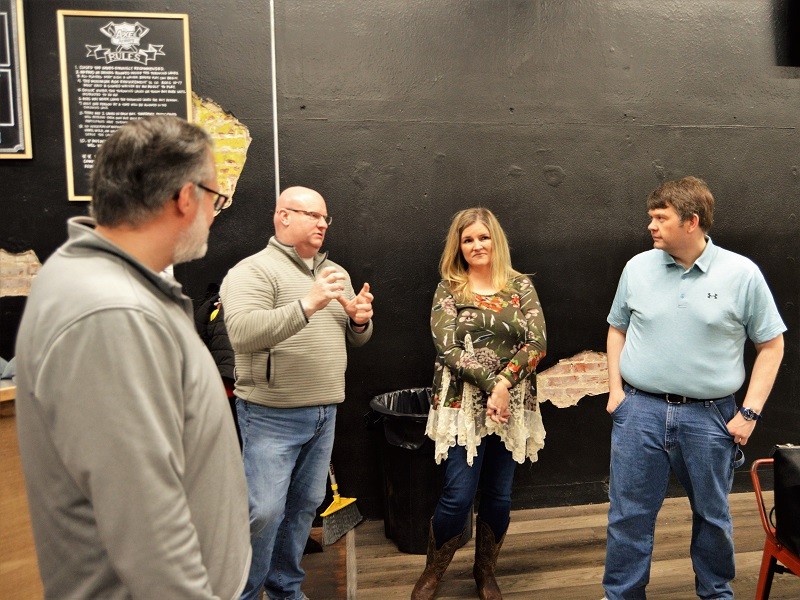 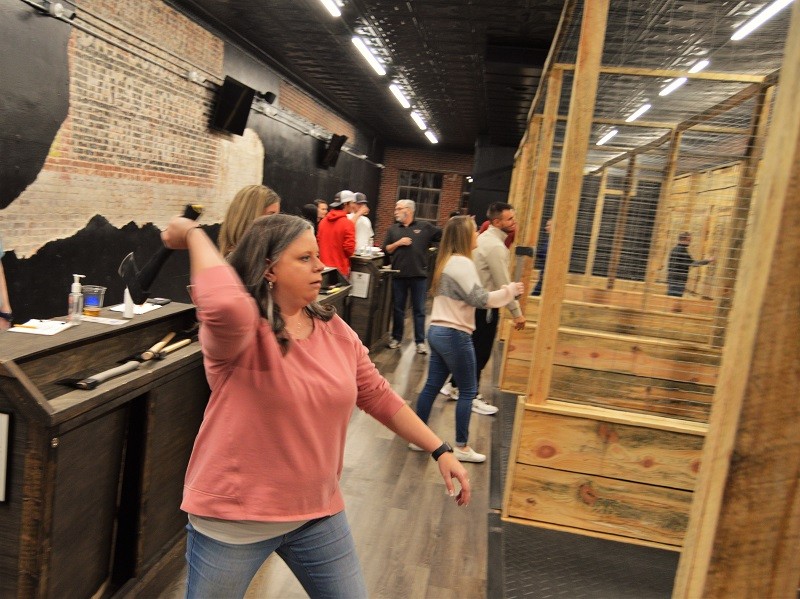 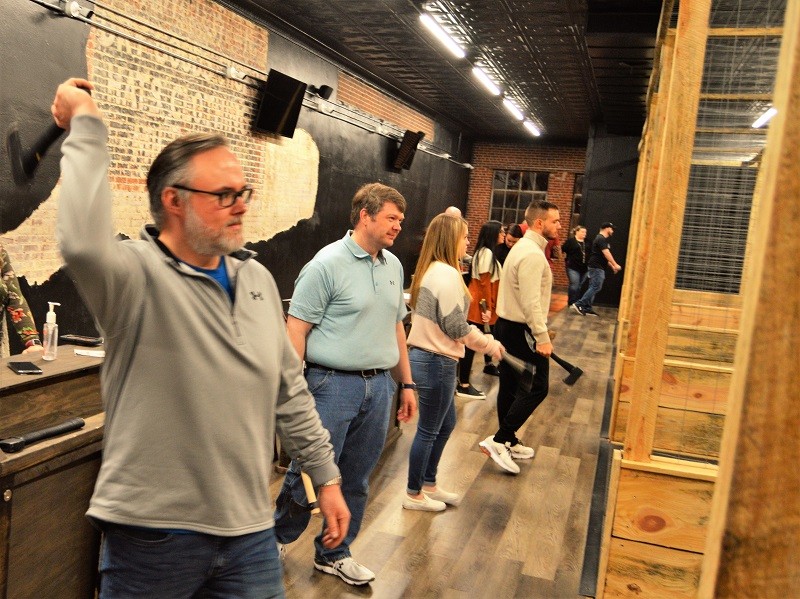 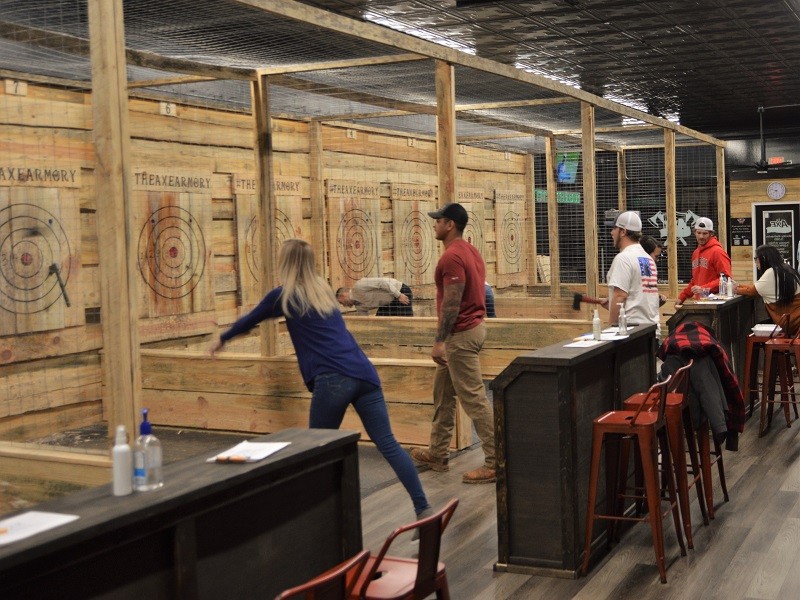 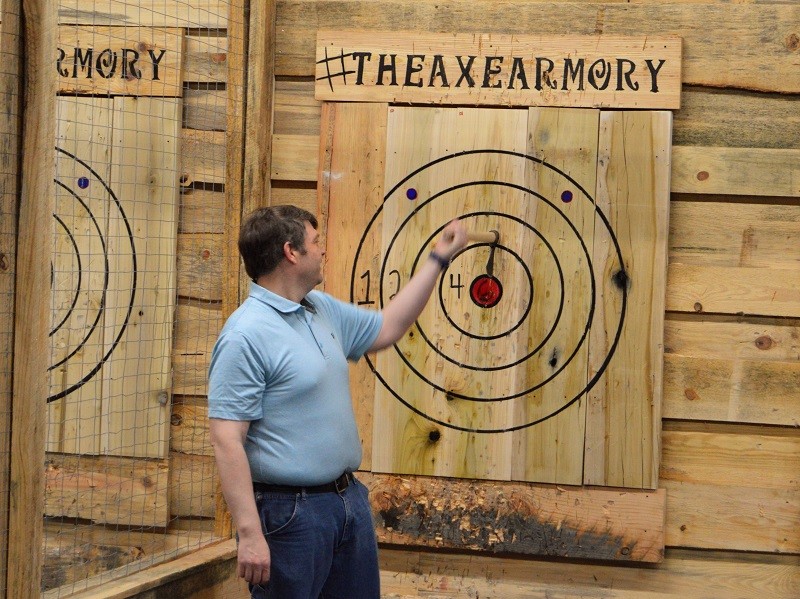 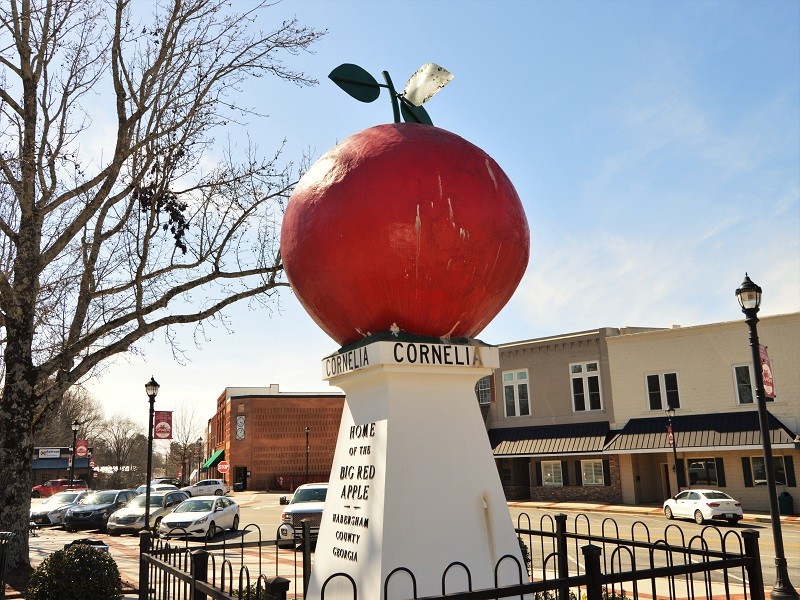 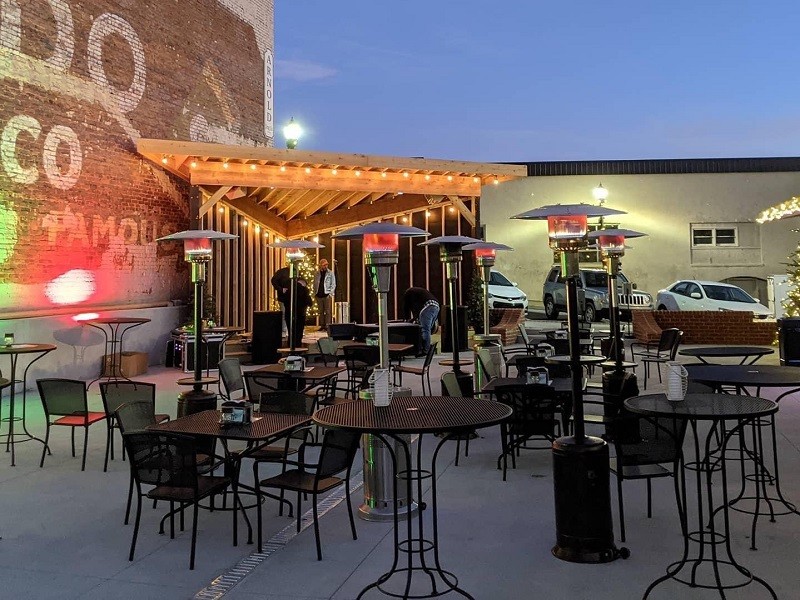 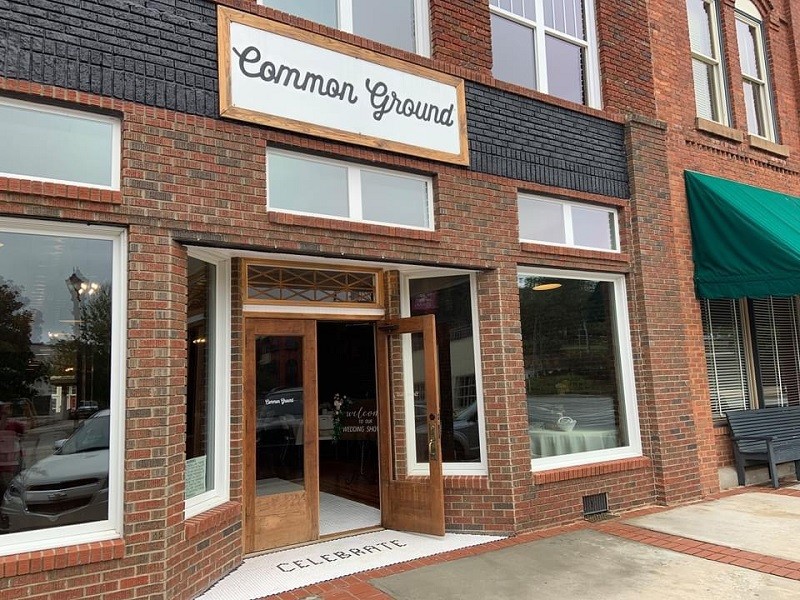 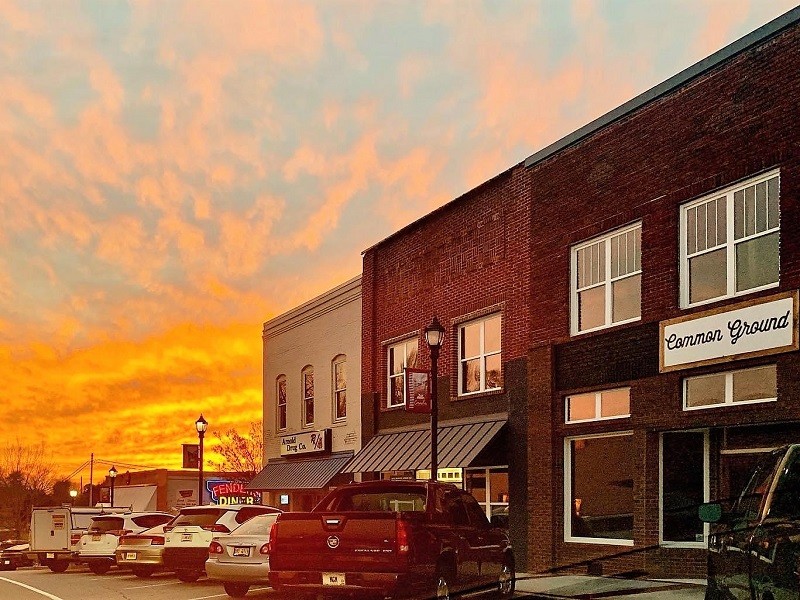 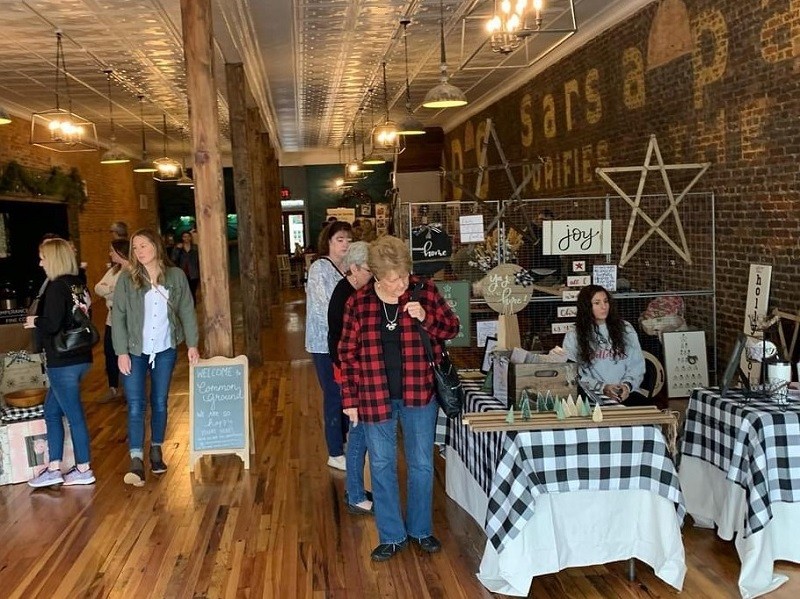 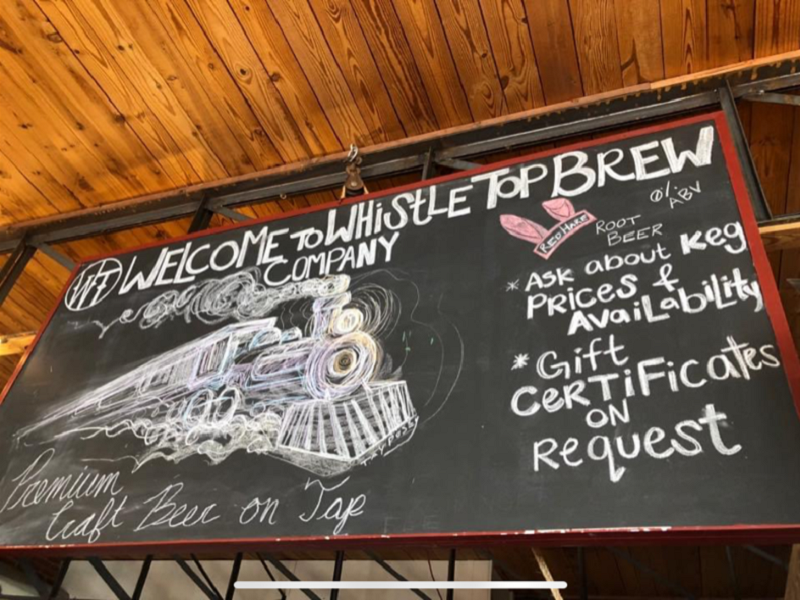 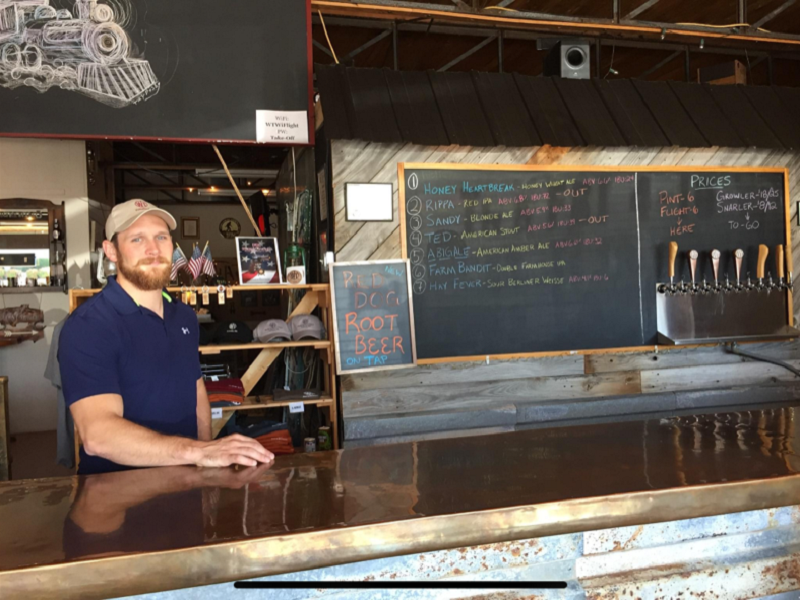 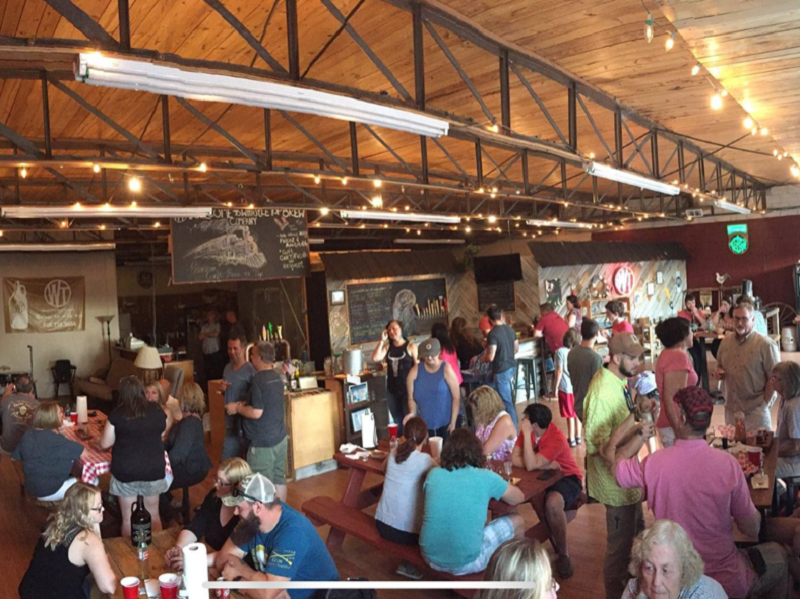 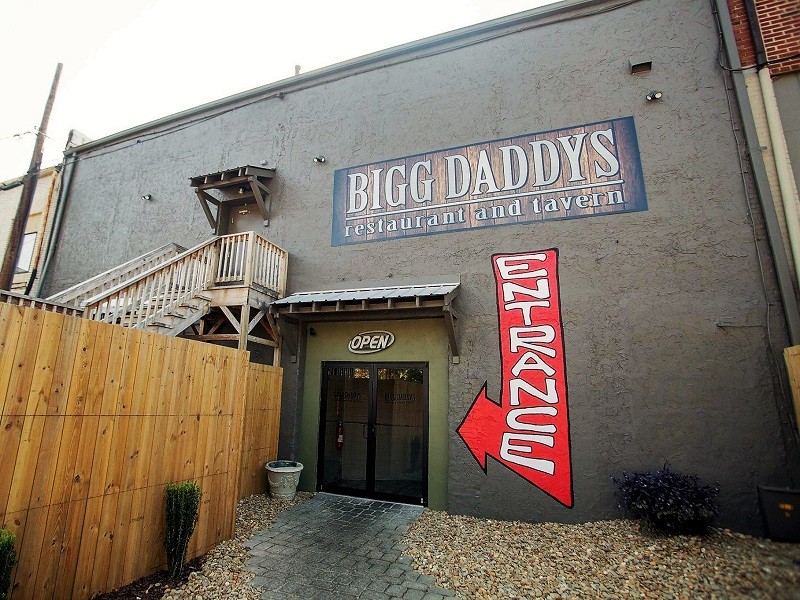 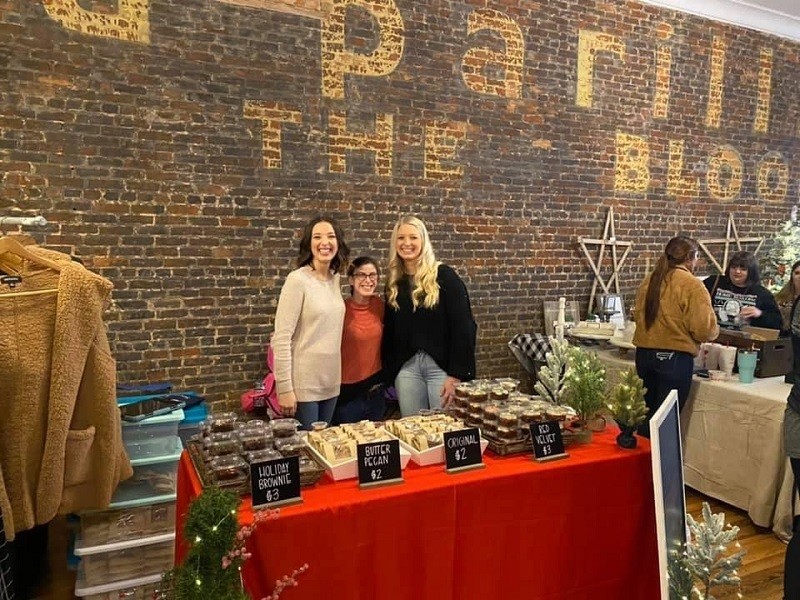 CORNELIA – The new entertainment district in Cornelia is helping accelerate the revitalization of downtown.

Combined with private investments from downtown property owners and the vision of entrepreneurs, the downtown district now sees an active nightlife.

Jay and Melissa Reeder purchased Fenders Diner in 2020 and transformed it into a craft food experience that includes the availability of alcohol. Shortly thereafter, they worked with the city to develop Fenders Alley and the green space area between the diner and Arnold Drug Co. That space is nearing completion and already has hosted several city and community events.

Additionally, the Reeders are working to transform the 1901 Cornelia Bank building at the corner of Main Street and Irvin Street into a signature fine dining experience for the region. It will be one of their four downtown businesses.

The business in the bank building will be known as Community Brew & Tap and is a rebranding of the old CBT logo used by Community Bank & Trust.

“It was just the opportunity in Cornelia that we saw, almost like a blank canvas with all the buildings that were open and available,” Jay Reeder said. “We came to Cornelia because we wanted to help rebuild the community. We wanted to help revitalize downtown. We wanted to create opportunities for not just the residents of Habersham to have a local, nice place to celebrate life – restaurant, entertainment, that type of thing – but also to have job opportunities for people.”

Community Brew & Trap will be something not found elsewhere in the area, Jay Reeder said.

Reeder said people thought he was crazy when he and Melissa proposed their ideas, and they heard a lot of skeptics and naysayers.

“At the same time, there’s been a lot of people who are excited, that want to see our county have fun, high-quality destinations that they can enjoy,” Jay Reeder said.

“There’s definitely been a shift from the first email and the naysayers,” Melissa Reeder said. “As our chef says, we’re going to earn their trust by them coming in and having that experience that Jay desires, which is clean, which is delicious food, which is great service and loving, kind servers that care about you and care about your experience.”

The face of downtown Cornelia has changed drastically since Bigg Daddy’s Restaurant and Tavern opened on Hodges Street, and other business owners are quick to acknowledge the foresight of Nathan and Lindsey Holt in seeing downtown’s potential and lobbying for an entertainment district where businesses are open after 5 p.m.

Another business in the entertainment district is Whistle Top Brew Co. on Main Street. Owner Scott Hulsey also lobbied for that district to help downtown businesses and promote tourism.

“It’s exciting to see the axe-throwing business come into Cornelia and to see that it happened as quickly as it did,” Jay Reeder said. “It just kind of proves that this is what people want – and I know they’re slammed all the time.”

“We opened on Oct. 16,” Hill said. “We’ve had great turnout. A lot of people are excited about our business and we’re excited to have them.”

Hill said the Cornelia Downtown Entertainment District is very important to him and other business owners, and he and others credit it with helping revive a stagnant downtown.

“It is key to our business,” Hill said. “We appreciate all of the people that are in the downtown district, the entertainment district in general, because we try to support each other. We’ve had a lot of support from the city, which is an awesome thing. They’ve been excellent to work with. We couldn’t ask for anything better.”

Lauren Coffee and a group of her friends recently gathered at The Axe Armory for an axe-throwing session.

“I enjoy having a place that me and my friends can go to enjoy our Friday nights,” said Lauren Coffee. “I like how all of the business owners in downtown Cornelia work together to support each other. I think that’s the best way to keep a business going is working together as a team to support each other when you’re running your own business.”

Coffee said the entertainment district allowing people to walk between businesses in that specified area with food and drinks, including alcohol, is another important aspect of downtown.

“I like that we can go to Bigg Daddy’s or Fenders or anywhere and bring whatever it is that we buy – dinner or drinks or whatever, we can take them with us and enjoy them, and we can go back and forth if we need more,” Coffee said.

Michael Ryals, who owns Kadaydle’s Subs, Salads & More, a Cornelia business that is not in downtown, said he enjoys supporting downtown businesses, including The Axe Armory.

Ryals said as a restaurant owner elsewhere in the city he knows how important it is for people to have other things to do besides eat when they go to an area.

“It definitely helps, this being so close to all the dining,” Ryals said of the axe-throwing venue. “I brought my employees here for Christmas and we had a really good time – enjoyed it.”

“The bank building is going to be the coolest project I think we’ve ever worked on, because we’re literally converting it to a ‘20s-era speakeasy or Prohibition-style venue where you come in the front door with a two-story, crystal chandelier hanging down and a grand staircase going upstairs,” Jay Reeder said. “You’ve got to walk through the bank vault to go into the dining room, and we’re trying to keep all of the old brick on the walls exposed. We put a lot of effort into exposing old murals and old brick, and even the old ceiling rafters that are 120 years old are going to be exposed in the upstairs dining room, so that’s going to be a lot of fun.”

Upon entering the front door of the former bank building, guests will be in the bar area.

“Between the upper and lower lounge and the main dining upstairs and the lower sort of more casual lunch dining and the outside curbside dining and the upstairs boardroom that we’re going to have, it’s over 200 seats,” Jay Reeder said. “It’s going to be quite a venue.”

And Reeder said the signature piece in the restaurant will be one of only just more than a dozen like it.

“In order to do things with excellence and create the quality experience of service and food and cleanliness, you need people,” Jay Reeder said. “But you don’t need just anybody, you need good people. We’re looking to hire and bring on board some of the best people around, which will in turn mean that we’re going to pay higher salaries and we’re going to have to bring on more people.”

“Looking forward to as we fully open Fenders Alley and the bank building and the catering business, we’re going to be ramping up north of 100 people for sure – maybe as high as 150 between this group of businesses in downtown Cornelia – all paying a very good wage,” Jay Reeder said.

Catering for the community

“Previously, the catering was handled by Fenders,” Jay Reeder said. “We’re going to move that up to the bank building and in the back end we’re building a catering kitchen. The business is going to be rebranded as Community Catering and it will be a catering service that can meet the needs of any event from casual to fine dining. We’ll have the chefs and the pastry people and the cooks that can create any masterpiece that anybody would desire for their event.”

Currently, Fenders is continuing to handle the catering until Community Catering’s new facility is completed.

“We cater Rotary each week and some other events that are semi-regular events,” Jay Reeder said. “There’s not as much event activity in the pandemic, but we’re hoping that as we kick COVID to the curb that things will ramp up again and the catering will take off.”

Common Ground, owned by Emily Herrin and her family, is located in the upper portion of the former Golds Department Store building that fronts Irvin Street.

Even during COVID, the new downtown venue has hosted numerous indoor community, civic, and political events while adhering to CDC requirements.

The venue is central to the Cornelia Entertainment District.

Herrin left her teaching degree with a master of education degree to make the investment in the community.

Fenders Alley, a public/private partnership, is a new outdoor entertainment venue located between the diner and Arnold Drug Co.

It was created at the cost of a small parking lot, but Jay Reeder said concerns over the handful of lost spaces has been minimal.

“Everybody understands it was really a bad parking lot,” he said. “It was dangerous, it was frustrating, it was just not ideal. When we eliminated those 12 spots, we actually added six very good spots on the street, so it kind of balanced itself really well.”

Contractors are in the process of redesigning Appletree Alley, the public parking area located behind Hodges Street.

“It will be a welcome addition to Cornelia to see Appletree Alley revitalized as well,” said Jay Reeder.

The project is funded through a USDA grant, a Georgia Power Co. grant, and funds from Cornelia Community Redevelopment Funds.

Reeder, like other business owners downtown, does not want to erase the city’s heritage, but rather revive it and introduce it to new generations.

“History is important, and how can do you do anything with that bank building and not recognize the history of that bank building?” Jay Reeder said. “Ignoring the 100-plus-year history that existed in that building is an impossible task, so we just decided to embrace it and make it part of the story. We’re not trying to erase the past. We’re just the next chapter in the story.”

Heath Barrett, who was chairman of the Cornelia Downtown Development Authority at the time of last year’s discussions about establishing the Entertainment District, said the average age of residents is 31, adding a lot of business owners have made an investment in the community for future generations.

“The best part of it is there’s room for growth,” Jay Reeder said. “As the pandemic comes to a close and as these businesses all launch and you see Fenders Alley drawing a lot of people down into Cornelia and CBT and Fenders and Bigg Daddy’s and the axe-throwing and all that and as people see this becoming a Mecca of entertainment and restaurants, there’s no doubt that this will be a highly desirable place to start a business. One of the reasons is because there are spots available, ready to go.”

“Ultimately, kind of where we see downtown Cornelia, historic Cornelia going is this destination entertainment district where you’ve got axe throwing, live entertainment venues and more relaxed, casual, fun dining and you’ve got higher end along the lines of what somebody might call fine dining, and other venues as well,” Jay Reeder said.

“People everywhere have a hard time with change, but there is a definite excitement – almost a buzz – about the changes that have been a long time coming,” said Jay Reeder.