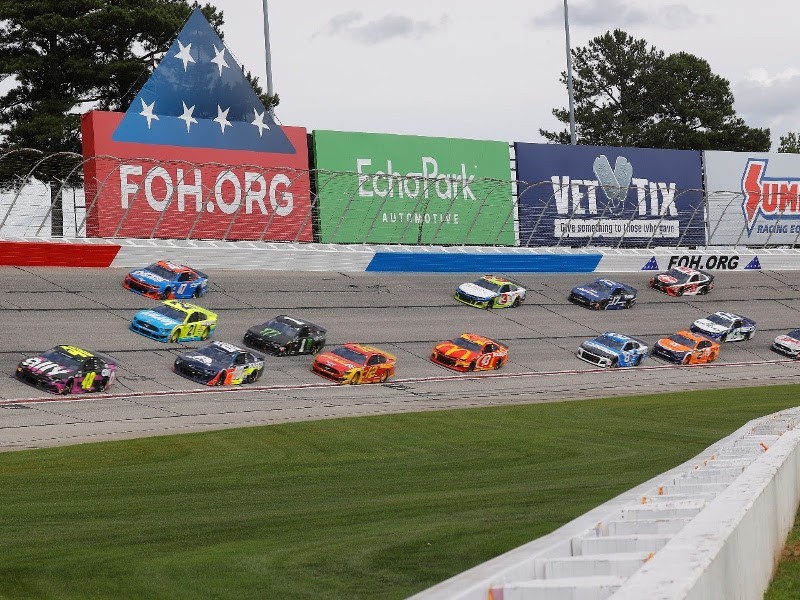 HAMPTON, Ga. (AP) — NASCAR is returning to its roots.

Even as the good ol' boys attempt to break with the uglier parts of their history — most notably, the Confederate flag — the sport has embraced a more traditional footprint with its 2021 schedule.

That includes Atlanta Motor Speedway, which on Sunday is hosting the first of two Cup races.

NASCAR will return to the track in July — the first time since 2010 that the 1.54-mile tri-oval has staged a pair of events.

The drivers are certainly pleased to be making a couple of visits to one of their favorite stops, a treacherous, high-speed layout that produces some of the best racing on the Cup circuit.

“Atlanta has always been a track I enjoyed,” said Martin Truex, Jr., coming off a victory in last week's race in Phoenix. “It's a very fun racetrack, being able to run all over the track, just the tire wear and all those things, are things I enjoy behind the wheel.”

Nearly two decades ago, NASCAR began an effort to expand its fan base by staging more races beyond the seven states — North Carolina, South Carolina, Virginia, Georgia, Tennessee, Alabama and Florida — that had long dominated the schedule.

But with attendance dipping at many tracks and big TV ratings harder to come by from an increasingly fragmented audience, the governing body decided to shake things up by turning to its past.

The coronavirus pandemic muddled the effort in 2020, but this year’s schedule includes 19 races in those seven traditional states — the most since 2003.

Atlanta has returned to having two Cup dates. So has South Carolina’s Darlington Raceway, which was limited to one race from 2005-19. Nashville is back on the schedule for the first time since 1984.

To accommodate the changes, NASCAR dumped Chicago and Kentucky. Dover gave up one of its two races. The first race scheduled in California in February was moved because of COVID-19 restrictions, but NASCAR still has a June stop in Sonoma on the schedule.

Reigning Cup champion Chase Elliott is thrilled to have two chances to win at what he considers his home track.

“It’s always going to be a special place for me," he said. “I spent lot of time racing Legends cars and things like that down there. For sure, I would love to go have a good run.”

If it doesn't work out this time, he'll get another chance in July.

Some things to watch for in Sunday’s Folds of Honor QuikTrip 500:

Twenty years ago, he won his first Cup race at the track only three weeks after the death of Dale Earnhardt.

Harvick replaced Earnhardt on the Richard Childress team and took the checkered flag in just his third Cup start.

He didn't realize the magnitude of the moment at the time. He does now.

"Knowing now what it meant to the sport, and just that moment in general of being able to carry on, was so important,” Harvick said.

After a 16-year drought in Atlanta, he has won two of the last three Cup races at the track, including last year's pandemic-delayed event.

The surprising group also includes William Byron, who claimed just his second career victory, and Kyle Larson, coming back from a season in which he was lost his job and was suspended for making a racial slur in an online race.

“Certainly it's not bad having different people win," Elliott said. “I feel like it's a good thing from a fan's perspective."

The Atlanta has gone 24 years since its last repaving, which makes it extremely rough on tires and much more challenging for drivers on long runs between pit stops.

“The pace falloff is massive with every lap," Elliott said “Every lap, you're pretty much losing time. If you can run two laps the same in the first 10 to 15 laps of a run, you're doing really well.

FANS IN THE STANDS

A year ago, Atlanta was the first Cup race to be halted by the coronavirus pandemic.

NASCAR was shuttered for more than two months, finally returning to Atlanta on June 7 after a massive reconfiguration of the schedule.

This year's race won't be totally normal, but it will include one big change from 2020: fans in the stands.

Atlanta will welcome about 20,000 spectators, selling out its grandstand tickets as well as having socially distanced camping in the infield.

Harvick and series points leader Denny Hamlin are co-favorites Sunday at 9-2. Larson is a 5-1 pick, followed by Truex (11-2) and Elliott (13-2). ... The weather is always a bit tricky when the Cup series races at Atlanta in March, but the forecast Sunday called for a partly sunny sky with temperatures climbing near the mid-60s Fahrenheit (18 degrees Celsius). ... Georgian Jeff Foxworthy will perform his comedy act before the race. ... Truex, Jr. was the first active Cup champion to win a race this season. ... Harvick and Kurt Busch have the most Atlanta Cup wins in the field, with three apiece. But Busch hasn't won at the track since 2010.