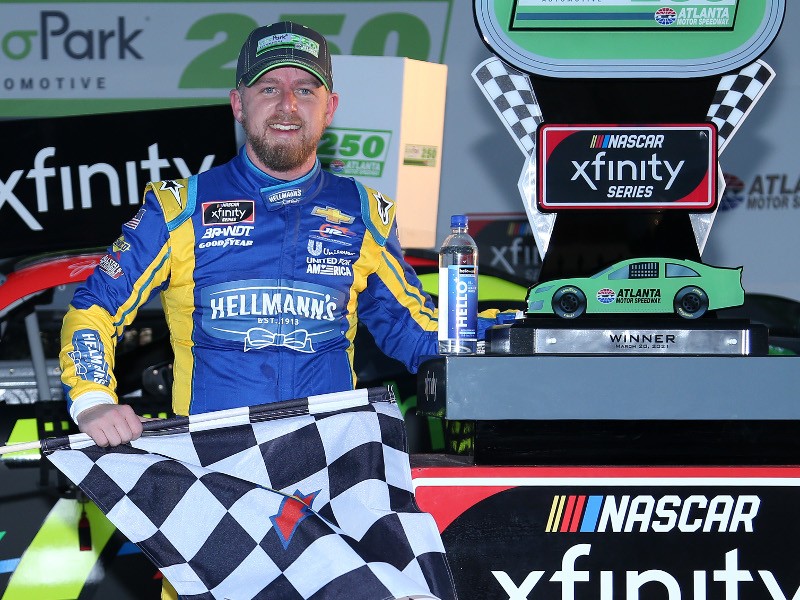 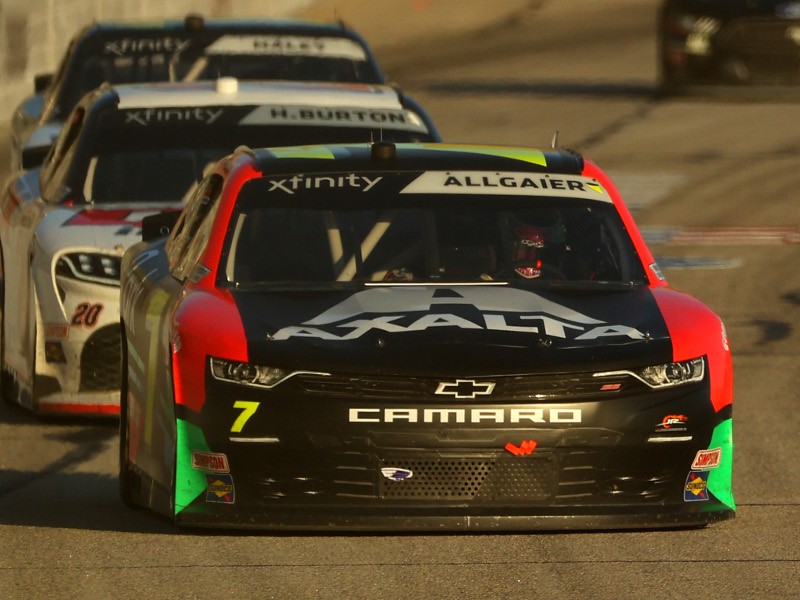 For most of Saturday’s NASCAR Xfinity Series race at Atlanta Motor Speedway, it looked like Martin Truex, Jr.’s day.

But Justin Allgaier had other ideas.

Allgaier moved to the point after then leader Truex was hit with a pit road speeding penalty under caution on lap 113. From there, Allgaier kept his No. 7 Chevrolet in control for the majority of the way en route to his first win of the 2021 season.

It marks the 15th career series win for Allgaier, and comes as he tries to rebound from a rough start to the season. He finished outside of the top 25 in the first three races of the year, followed by a 14th at Las Vegas and an eighth place finish last week at Phoenix.

“We didn’t start off the day like we wanted to. These guys persevered behind it,” said Allgaier. “They pushed and made great adjustments on pit road. (Crew Chief) Jason Burdette and all the guys on team did a great job.

“My wife and daughter are here so they may not be able to come out here but I get to go celebrate with them. Just proud of the effort that we put in today.”

Making his first series start since 2010, Truex had the fastest car on the day, driving away from the field time and again as he led 103 of the race’s 163 laps, the most on the day. But a speeding penalty during a pit stop under caution on lap 113 derailed his run, leaving him restarting around the 25th position.

Truex quickly moved forward, but found his momentum stalled during a battle with Gragson for fifth. Once he finally got around, Truex was able to drive his way to second. Over the closing laps, he was able to get as close as half a second from Allgaier’s back bumper. But in the end, he had to settle for a second place finish.

“We got back up there, but obviously, we were kind of out of tires at that point,” said Truex. “Got close, and then the last 10 (laps), the right rear was completely smoked off. Just had to use too much to get there.”

“Martin had a great race car,” said Allgaier. “They definitely had the car to beat at the beginning, and we made good adjustments and that’s what it came down to at the end.”

But the action wasn’t just on the 1.5-mile AMS layout on the day, as a dust up broke out post-race on pit road between Noah Gragson and Daniel Hemric. The confrontation stemmed from a situation on pit road between the two, when Hemric pulled into Gragson’s pit to avoid another car. Hemric quickly backed into his own pit box. When Gragson pulled into his pit, he backed up suddenly into Hemric, almost hitting one of Hemric’s crew members in the process.

After the race, Hemric came down to confront Gragson at his car and punches were thrown between the two before being broken up by crew members and officials.

While the action on track was mostly calm, save for a few spins, the race did have a pair of incidents that eliminated some strong cars.

The first came as the race was approaching the end of the first segment, when contact between Atlanta, Georgia’s Brandon Jones and Brett Moffitt sent both cars up the track, gathering up and damaging several other cars in the process, including Gragson, A.J. Allmendinger, early leader Austin Cindric, David Starr and Timmy Hill.

The second occurred with just over 30 laps left in the race when contact between Ryan Sieg and Josh Berry send Berry’s car spinning off turn four. He had the car gathered up and pointing in the right direction when it travelled onto the infield grass along the frontstretch. The splitter on the front of Berry’s No. 8 Chevrolet dug into the grass, launching the front of the car high into the air and heavily damaging the front of the car. Fortunately, Berry was uninjured.

Harrison Burton finished in third, with Gragson in fourth and Allmendinger in fifth.