How did we survive without technology? I don't know, but I'd like to try!

My younger sister Jen is an extremely accomplished woman.  She has raised and home-schooled seven amazing American citizens in the gulag of Michigan.  She's been a political activist, railing against everything from home school curricula to face masks.  And because none of that is enough, she has taken in my parents, creating a truly multi-generational home.  Or three-ring circus, depending on the day.

With cell phones, however, my sister is ... well ... challenged.  Jen has owned more phones than Murphy Brown employed secretaries.  She's sat on them, left them in the rain, lost them ... well, you get the picture.

So she has decided to stick to "dumb" phones.  My dad has one too, and Mom is "this close" to doing the same.  Jen's latest is a Nokia.  Didn't they make cameras?  I'm not sure if her new phone has a camera, but as a phone, it's sadly lacking.  Last night, I spent the better part of two hours with Mom and Jen and their phones.  Mom had a security issue, and Jen ... well, let's just say her phone didn't work coming in OR going out.  I was able to fix Mom's problem, but Jen's ...

First, I tried sending her a text.  Nothing.  Then she tried to call me.  Nothing.

Last January, I recall that in that home of nine, the only working cell phone belonged to the eldest daughter.  I have her on speed dial, in case of emergencies.

It's not just the family.  I'm proud of my personal cloud system and the media server called Plex.  When it works, it's the bomb.  All of my personal media, consisting of thousands of television programs and maybe a hundred movies, is available to me anywhere I have an internet connection.  But boy, if they get into a fight and stop talking to each other, I feel like I'm back in the stone age!  I'm relegated to watching my programs on these little round discs.  But I digress.

Saturday afternoon, I spent about an hour and a half waiting for a technical support chat from Western Digital, who makes the personal cloud system that I own.  This is because Plex offers NO technical assistance.  Your best hope is to post on the "forum" and hope that some technogeek has the wherewithall and endless patience to help a newbie that doesn't know what DHCP and IP are, and CERTAINLY not how to log in to a router and change them.  I just typed that, and I have no idea what it means.

Western Digital has "bait-and-switch" tech support refined to an art.  I was told that I was 23rd in line, and could expect an associate in 18 minutes.  In case I was keeping score at home, I was also treated to the average wait time, which would adjust itself as time went on, to give me something entertaining to look at.

When I got to the top of the line, I was then greeted with the statement, "there is no one available to help you at this time.  Please try again later."  I was so flummoxed by the audacity of this, I actually got in line again, and repeated the process.  Yep.  Same thing.  The third time they let me off the hook early and disconnected me when I was eighth in line.  Later on, the software suddenly began behaving as it used to, and MyCloud and Plex were fast friends again and all was right with the world.

I bought a smart watch last year from Spade and Company.  I had read online that it was the best smart watch out there for the money.  I love Apple, but I'm leery of spending $400 for a watch.  I almost never wear this thing.  It's wonderful for checking my pulse, counting my steps, and during my Facebook days, alerting me to replies.  Tells me if my phone is ringing too, in case I don't take the hint from the vibration in my pocket.  Only thing the damn thing won't do is keep accurate time.  It's supposed to sync with my phone, but it doesn't.  What does tech support tell me?  Well, sir, it should sync with your phone.  Well, there we agree.

Every Monday evening, I FaceTime with my parents in Michigan.  That is, as long as Mom's tablet is charged.  That's a coin flip most weeks.  If it's not, we can still communicate ... but Mom has to find a way to plug in.  Call Dad, and you'll most likely go directly to voice mail.  His phone is either on silent, or it's been drained and he hasn't missed it.

Then there's the charming Miss Alexa.  I love this new gadget.  She tells me the weather each morning, what my Phillies did, if anything, the night before ... and now she'll even fast forward past the commercials when I use my DVR.  But if you don't ask for things in exactly the right way, she can be extremely frustrating.  And no matter what you do, you can't rattle her.  Pity.

Yesterday, I was watching the classic John Wayne picture "The Quiet Man," which is my St. Pat's tradition, with three friends.  They had never seen it.  The film is notable for its lush scenery and gorgeous photography of Ireland.  Much of this was missed by my friends, who were all glued to their smartphones for a substantial period of time.  To be fair, Jeff was focusing on the life and career of Maureen O'Hara.  He knew pretty much everything about her by the time she and John smooched at the deserted church.  And I've commented before about the couples I see out at a nice restaurant, enjoying each other's company by studying their phones.

So onward we march, prisoners of the very gadgets and devices that we use to make our lives easier.  At least my sister doesn't lose any sleep over HER phone.

By the way, she texted me excitedly at 1:49 this morning.  She got my text. 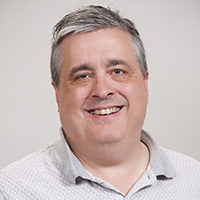 Bill Wilson Reporter
More Articles From Bill »
© Copyright 2021 AccessWDUN.com
All rights reserved. This material may not be published, broadcast, rewritten, or redistributed without permission.