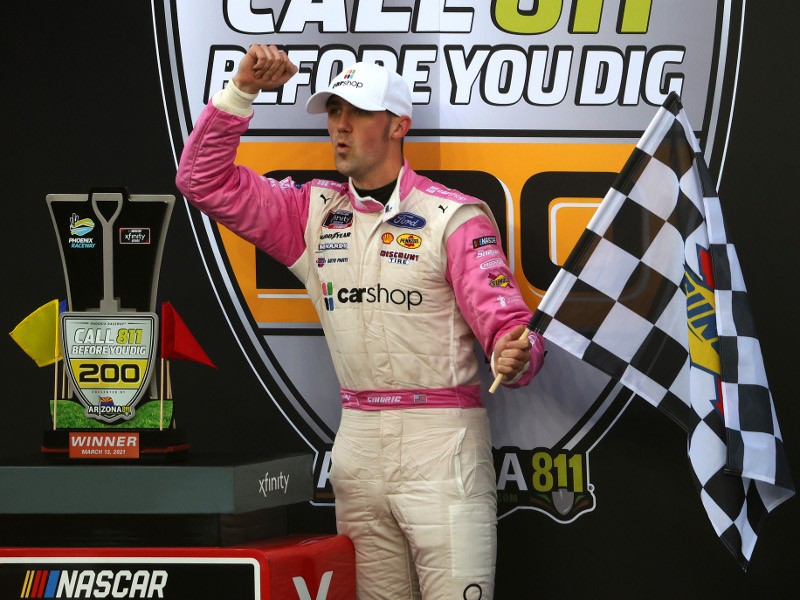 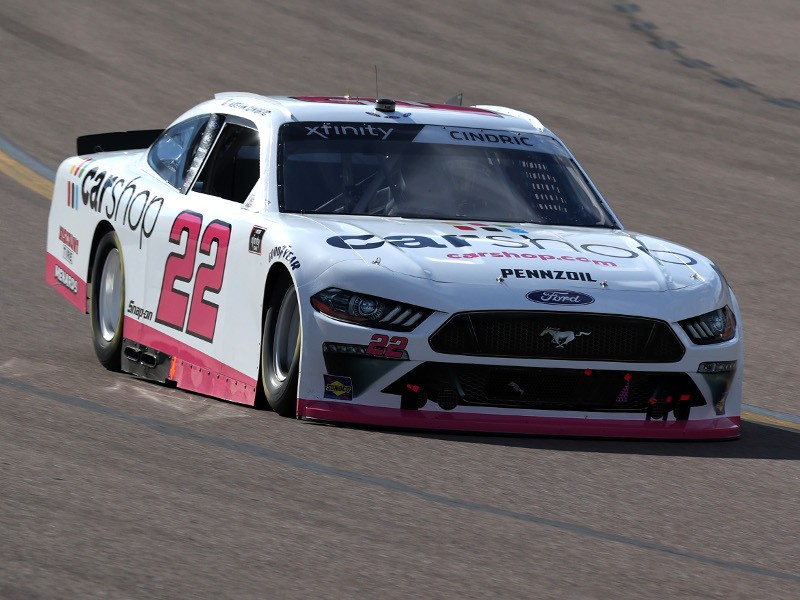 It’s the second consecutive win on the one-mile Phoenix oval for Cindric, who won there last November to claim the NASCAR Xfinity Series championship. He led a race best 119 of the 200 laps en route to the win Saturday – including the final 54 laps, holding off the field on three late race restarts. The 22-year old North Carolinian is the only repeat winner so far in 2021.

“Just fighting for track position there,’’ Cindric said of the door-to-door racing with Justin Allgaier on the restart.

“You have to work hard the rest of the year to get here,’’ Cindric said of the good showing on the championship race venue. “So that’s where my focus is. I’ve got my name on the wall right there and the goal is to be back with a shot to do it again.’’

The last restart with two laps remaining was not-too-surprisingly the most action-packed and the biggest threat to Cindric’s lead, but several cars running among the top 10 on that start hit the wall or hit one another in a chaotic run to the checkered flag.

Daniel Hemric, who restarted on the front row alongside Cindric, was caught up in the heavy full-contact restart and ended up 23rd. Allgaier, whose No. 7 JR Motorsports Chevy started just behind Cindric’s No. 22 Team Penske Ford on that last restart, pulled door-to-door hoping to make a move for the win, but he got loose and bounced backwards, recovering to finish eighth instead.

Gibbs, who won the ARCA Menards Series race at the track on Friday night, drove a steady, if not risk-filled race all afternoon and was able to take advantage of the melee on that last restart to take the runner-up position. In two Xfinity Series starts, Gibbs has a win on the Daytona road course and a second-place finish.

Brandon Brown finished in third, with Riley Herbst in fourth and last week’s winner A.J. Allmendinger in fifth. All three took advantage of the aggressive racing on the last restart. For Brown and Herbst, those finishes are a season best. It was Brown’s career best finish.

Jeb Burton, Bayley Currey, Allgaier, Brett Moffitt and Jeremy Clements rounded out the top 10. It marks the first top 10 in the 24-year old Currey’s career. It was the first top 10 for Allgaier this season, and his 32 laps led was a season best as well.

“Just disappointing there,’’ Allgaier said. “Once we got to his outside, I thought we had it, but he just got me out of the PJ1 and into the marbles and unfortunately it all comes up quick when you’re bumped out of the PJ1.

“I’m so proud of everyone at JR Motorsports,’’ he continued. “I learned a lot I think for when we come back here in the fall and hopefully we’re in the Final Four.’’

Resilience, like it or not, was a dominant theme on Saturday.

The final restart was a disappointing outcome for Hemric, who for the second straight week won a Stage and proved to be a trophy contender. He rallied from a tough mid-race pit sequence to be back among the top five when it counted most.

His No. 18 Joe Gibbs Racing Toyota, which had been strong all day, fell off after a pit stop adjustment following his Stage 2 win. Hemric’s race got more complicated when he was called for speeding on pit road, but he remained calm and raced his way back inside the top 10, then the top five. He re-started next to Cindric before getting caught up in the five-wide racing at the end.

It was a similar day of a strong showing gone awry for the defending race winner Brandon Jones. The driver of the No. 19 Joe Gibbs Racing Toyota was a top five car early in the race and rebounded from an early pit road speeding penalty to run top five again – even leading the race for a pair of laps.

However, while running in the front pack of cars with only 33 laps remaining, his Toyota was hit from behind by Allmendinger. The damage to Jones’ Toyota was too much and instead of a sure-bet top five and a shot for a second straight spring victory at Phoenix, he finished the race from the garage.

“All in all we had a really good Toyota Supra, looks like I just got run over by A.J. but I keep a notebook of all this stuff,’’ Jones said after emerging from the care center.

The top five showing for Riley Herbst was easily his best run of the season in his maiden year driving the No. 98 Stewart-Haas Racing Ford. He had three DNFs in the opening four races.

It’s been a similar frustrating early season for championship favorite Noah Gragson. For the third time in the five races this season, Gragson took a DNF. His No. 9 JR Motorsports Chevrolet suffered an engine failure and he retired on lap 67. His teammate Michael Annett also had engine problems in the No. 1 Chevrolet and finished 38th.

The NASCAR Xfinity Series races at Atlanta Motor Speedway next Saturday in the EchoPark 250. Cindric holds a 47-point lead over Hemric in the championship standings.