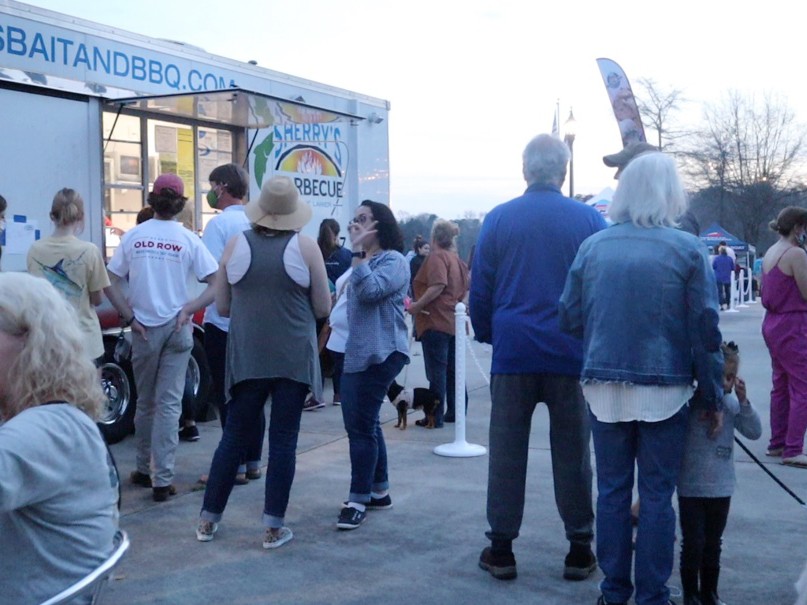 A large crowd created long lines for some of the tasty food options at the first Food Truck Friday on March 12.
Contact Editor

The gathering was perhaps one of the first signs of the city returning to normalcy nearly a year since the first confirmed case of COVID-19 in Hall County.

"We're all hoping to get outside, do something a little bit normal [and] see our friends again," said Eric Larsen, special events manager for Lake Lanier Olympic Park. "I think we're all just itching for whatever normal might mean to us, to get a semblance of that back."

Larsen explained that the monthly event, which takes place from March to August, was postponed last year due to the pandemic. The park still hosted the event, but not with quite the attendance that this year's first event drew.

"Last year's numbers, when we did have our events, they were smaller that they had been in the past," said Larsen. "We've started this year based on what we think the numbers are gonna be based on last year and tonight's gonna be an interesting test...it's looking like we're gonna pass our test."

Larsen said that social distancing guidelines were still encouraged- the food trucks were spread out and enough seating was available for people to separate themselves accordingly.

Last night's selection of food trucks included Bill's Grill on Wheels, Sherry's Bait and Barbecue and Pass the Plates. Beverage trucks from Tap It Growlers and Downtown Drafts were also at the event.

Food Truck Friday is scheduled to take place on the second Friday of every month until August, with July the only exception.

Click the video above to see footage from the event and to hear more from Larsen.