Gragson under fire but defiant in return home to Las Vegas 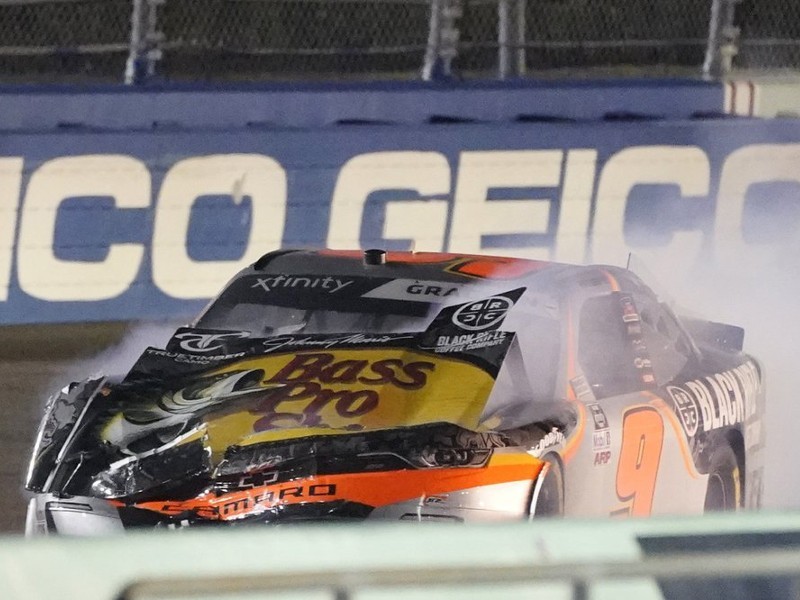 Noah Gragson limps along the track after having made contact with David Starr with two laps to go while leading in last Saturday's NASCAR Xfinity Series race at Homestead-Miami Speedway. (AP Photo/Wilfredo Lee)
Contact Editor

LAS VEGAS (AP) — NASCAR has a new villain and he doesn't really care what anyone thinks about him.

Noah Gragson is the starring figure in the latest uproar that is typical NASCAR. He crashed while leading last weekend's race and ran his mouth afterward. How it was received depends on how you feel about Gragson.

He can be viewed as a refreshing young Xfinity Series driver unafraid to show his personality in a sport stuffed with straight-laced corporate promoters. Some instead see him as an entitled 22-year-old from a wealthy family who is undeserving of the attention and maybe even his ride.

He's back home in Las Vegas for Saturday's race and finds himself at the center of a heated debate. Should he continue the defiant “I'm going to be me” stance or take a step back?

“That’s my job is to get people talking about me. And it’s going good right now,” Gragson said.

Gragson has been building to this moment the last four years, following a path blazed by NASCAR champions Kurt and Kyle Busch, who are also from Las Vegas. He was in the Truck Series at 18 driving for Kyle Busch's team, but the pipeline that traditionally leads to a Joe Gibbs Racing ride only got him three Xfinity Series races.

Gragson moved to JR Motorsports, the team owned by Dale and Kelley Earnhardt with a Hendrick Motorsports alliance. He scored two wins last season, his second with the team, but made waves on and off the track.

Earnhardt Jr. told Gragson he was too aggressive and needed to reign it in a bit. Gragson tried for a bit, but found it just didn't suit his style.

“I tried to do what he said, but I just slowed down,” Gragson said. “I didn’t have the speed. I finally got into the playoffs and I’m like, ‘Screw that, I’m going to go out there and race as hard as I can and be comfortable with myself.’ And we had really good results.”

The bumps continued on the track and off — he landed a right hook to the side of Harrison Burton's face in a July incident — and he's sparred on social media with his detractors.

Now it's ramped up again after last Saturday's race at Homestead-Miami Speedway, where Gragson had nearly a nine-second lead with three laps remaining when he ran into the back of a car he was trying to pass. David Starr was on the lead lap and didn't have to yield position, but Gragson let loose afterward on live TV.

Carl Long, owner of Starr's car, responded by calling Gragso n an “over-entitled mouthpiece” who “did not have enough talent to miss our wreck.” Fox Sports announcer Mike Joy even got involved.

“Our sport has always had ‘funded’ drivers,'" Joy wrote on Twitter. "But its (sic) high time a few of these privileged kids, powered by daddy’s pile of cash, realize this whole sport doesn’t exist just to make their dreams come true. Take some time to learn from those who’ve WORKED their way to the top.”

Gragson believed the tweet was directed at him but has refused to back down, even as other drivers piled on.

“I love it. I love every second of it,” Gragson said. "There are people who like me, there’s people who hate me, you’re gonna have that. Does it bother me? Not a bit.”

Gragson opened his media availability ahead of his hometown race while driving a passenger vehicle, a somewhat unprofessional approach to a business commitment. He eventually pulled over.

Gragson has also developed an affinity for hard seltzer, has made multiple references to seeking out a cold one following a race and seemed to accept one from a fan through the fence last summer at Bristol. It's raised eyebrow s because Gragson's father last September was sentenced to eight years in prison for a 2019 fatal DUI crash.

Gragson this week suggested the online abuse that followed his father's crash, trial and sentencing is harsher than anything he's faced in his racing career.

“Probably the worst stuff you could hear on Twitter based on personal experiences in my life over the past couple years," Gragson said. “Stuff that happens on the race track doesn’t bother me a bit.”

So he is enjoying his time at home with friends and family and is looking ahead to winning his first career race at Las Vegas Motor Speeedway. Gragson has not finished lower than sixth in four Xfinity starts and was second in last September's playoff race.

“I'm excited to be back in my hometown, it's just comfortable. It's fun. My favorite restaurants, my favorite places to hang out,” he said. “And I was so close to winning last weekend, and all the haters on Twitter, it's more fuel for the fire and I enjoy every bit of it and it's more motivation for me to go out there and win this weekend.”

WDUN will carry live PRN Radio coverage of the NASCAR race weekend from Las Vegas Motor Speedway, beginning with Saturday's NASCAR Xfinity Series Alsco 300 starting at 4 pm on 102.9 FM and streaming live on AccessWDUN.  Coverage continues on Sunday with the NASCAR Cup Series Pennzoil 400 beginning at 2:30 pm on 102.9 FM, AM 550 and streaming live on AccessWDUN.