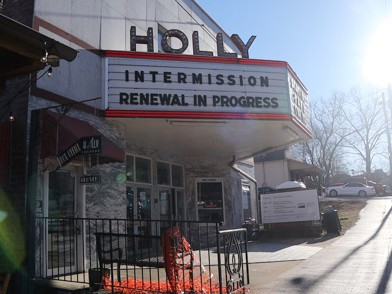 The historic Holly Theater is a familiar place to many with ties to the City of Dahlonega. While the theater looks the same on the outside as it has for many years, renovations are well underway on the inside. 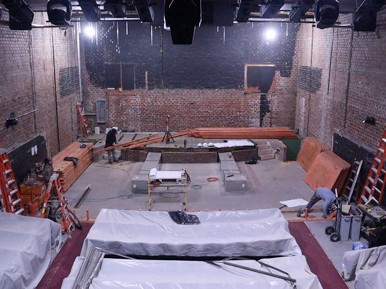 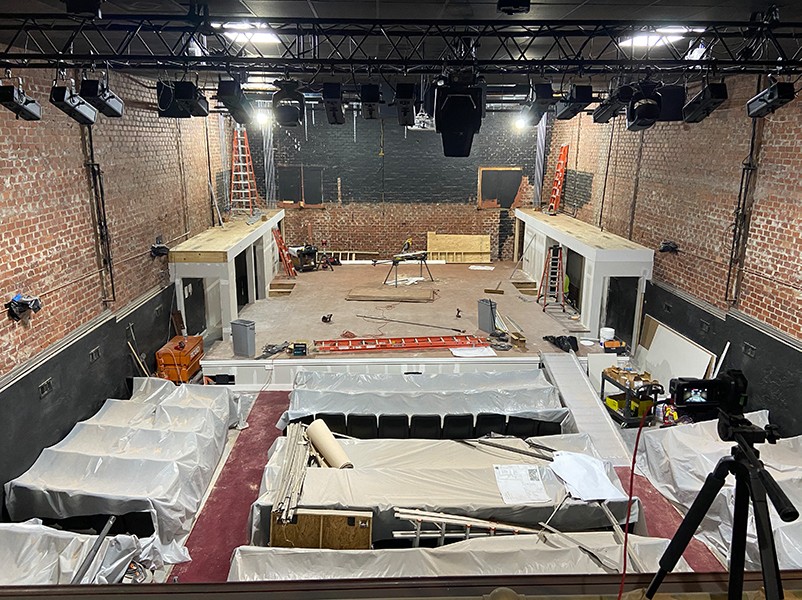 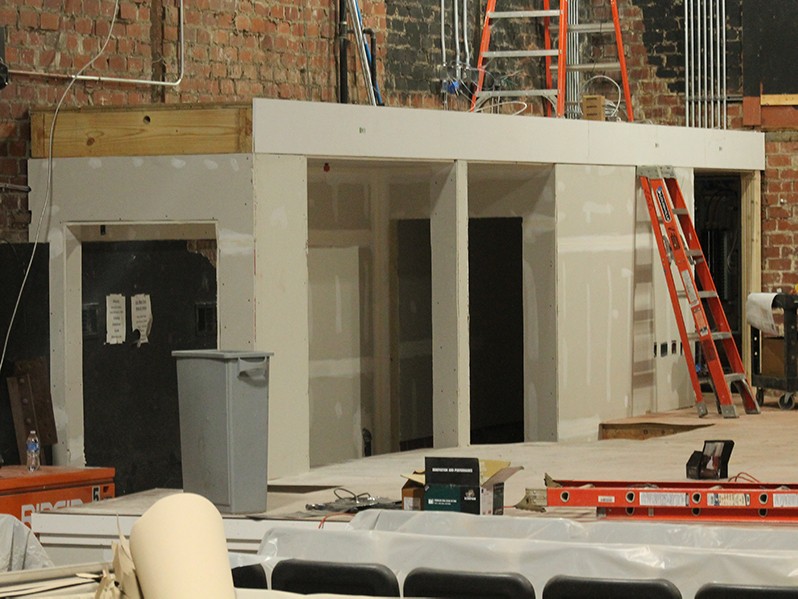 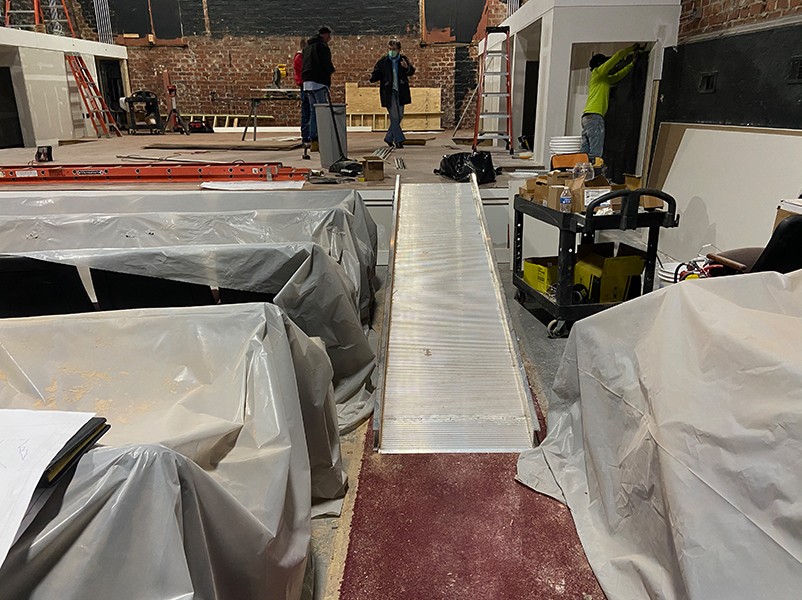 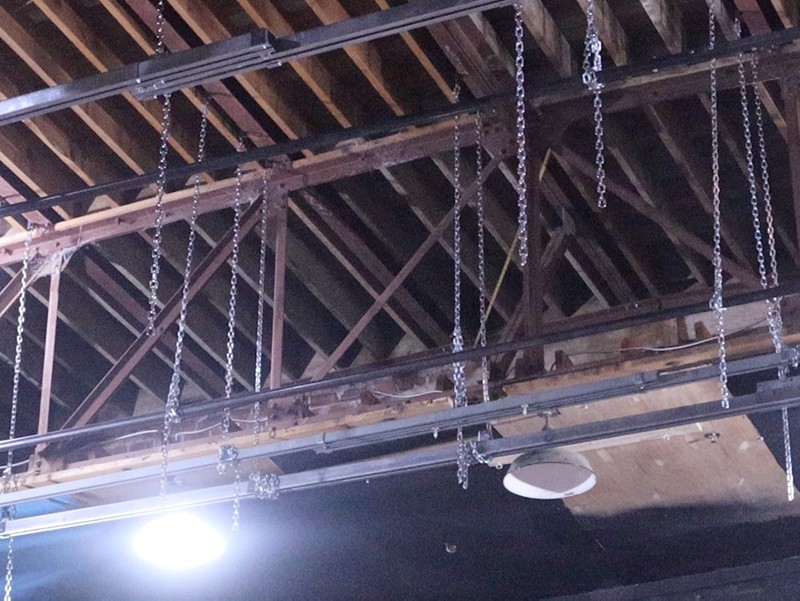 From the outside, it doesn’t look like much has changed at the historic Holly Theater in downtown Dahlonega. But on the inside, a renovation is well underway to revamp the interior of the theater and bring many of its production aspects into the 21st century.

“This renovation project addresses needs inside and artistic needs,” said Ivana Pelnar-Zaiko, chairwoman of the board that oversees the Holly Theater. “One is a need to improve code requirements when it comes to emergency egress and access to the stage…but the major part is also updating the technical capabilities of the theater.”

Pelnar-Zaiko said volunteers for the Holly Theater put together a wishlist several years ago of technical changes they wanted made to the theater. Many of those wishes are coming to fruition now- one of the most major is the installation of a steel grid above the stage to allow easier scenery changes.

Previously, curtains and backdrops were attached to the roof rafters of the building and then changed by hand through a pulley system. Once the renovation is complete, scenery changes will be attached to the steel grid and then changed through an automated system. In addition, a new curtain made of fire-resistant material will replace the old one.

In order to install the steel grid, construction crews had to strip portions of the theater down to the concrete floor and the original stage.

Pelnar-Zaiko said that the reinstallation of a new stage will bring the theater up to code with stage access. She explained that prior to this project, the stage inside of the theater was not in line with requirements set by the American Disabilities Association.

“So if we had an elderly or handicapped person who wanted to participate in a show, there was really no good way to make that possible,” said Pelnar-Zaiko.

The Holly Theater is certainly a product of its time. According to the book Screen & Stage: The Story of Dahlonega’s Historic Holly Theater by Anne Dismukes Amerson and Kate Cassady Brehe, a man by the name of Randall Holly Brannon broke ground on the theater on March 31, 1947. Brannon had been showing films through a projector in the Price Building on the Dahlonega square as early as 1939; the first film shown in that building was Stagecoach, led by the future Western movie star John Wayne.

Only a few months into construction, Brannon received a telegram from the federal government forcing him to stop construction. This order was issued because many of the materials necessary for the construction of the theater was also needed to provide housing for veterans following World War II.

But according to Hal Williams, chairman emeritus of the Holly Theater board, Brannon wasn’t willing to give up just yet.

“He wrote to Congress and asked for an exception and Congress granted that exception,” said Williams. “So we say that we’re the only theater in Georgia for sure that was built by act of Congress.”

The historical significance of the Holly Theater has not been lost over time. In fact, Williams said that the theater and the Dahlonega City Hall are the only two buildings on the square on the National Historic Registry.

“We are required, both internally and externally, to meet those standards and we had to get approval on a lot of the things that Ivana has engineered here,” said Williams.

Pelnar-Zaiko and the board faced a similar battle as Brannon when it came to acquiring resources for this phase of remodeling. She didn’t face any opposition from the government, but she did put in requests for federal grants. Two of these requests were ultimately rewarded- one grant from Rural Business Development and another from the Appalachian Regional Commission.

In addition, she was able to secure from funding from the Fox Theater Institute. Pelnar-Zaiko said that one of the institute’s focuses is to help other historic theaters succeed and it also supplied funding in 2015 when the Holly Theater was renovated on the outside.

She added that a stipulation of the two federal grants is that they both have to be matched. Fortunately, the board has had tremendous help from the community so far to help raise money.

“The community has gotten behind us early enough and strong enough that we knew we had a good amount of the money already,” said Pelnar-Zaiko. “In July, when we found out that we got the first federal grant, we had enough confidence that we could raise the rest of the money.”

Certainly the COVID-19 pandemic has impacted the renovation process, but not all of it has been negative. Williams said that construction was originally scheduled to begin in the spring of this year, the health crisis provided an opportunity to begin without effecting a show lineup.

“It’s been a double-edged sword for us, we had to go faster than we originally intended to but at the same time we haven’t deprived people of theater because nobody is getting out now to go to shows,” he said.

While the board is still in need of more funding to the meet the total cost, the community continues to support its objective. In January, board members hosted an open house event for supporters to get a peek at the ongoing construction progress.

“Everybody was delighted…many of them had not seen the old stage and so they were kind of interested in that,” said Williams. “For so many years the Holly Theater was the only thing in Lumpkin and Dawson counties, if you wanted entertainment you went to the Holly Theater…the Holly Theater has a very warm spot in the hearts of people in the mountain area.”

As the renovations become complete, the Holly Theater will be hosting a series of small scale productions in a preview period this spring and summer, with a grand reopening planned for the fall. The theater will be offering the Broadway musical Godspell in mid-May 2021. 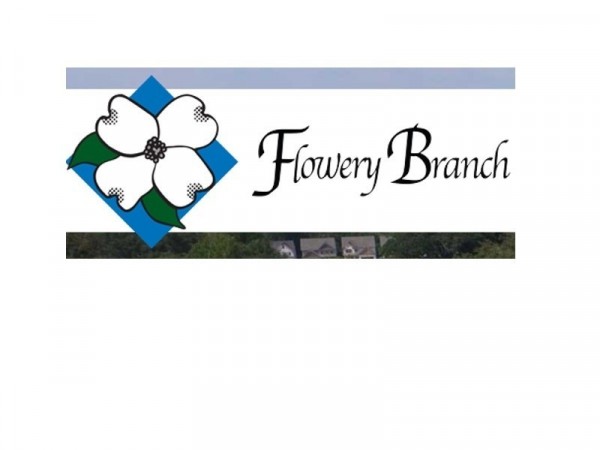 Historic school in Matt community of Forsyth County to be purchased by county
Forsyth county leaders vote to purchase a smaller piece of property surrounding the historic Matt school. 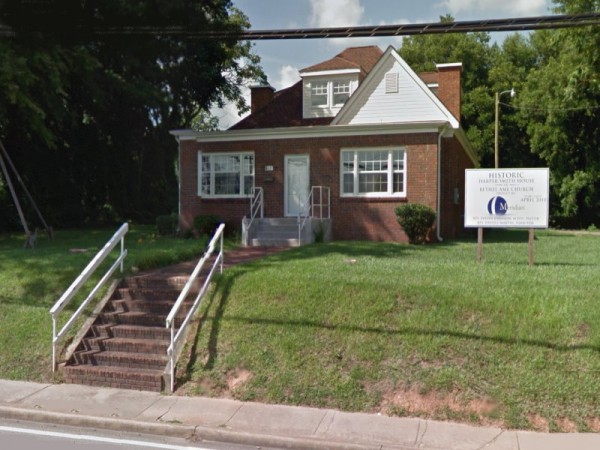 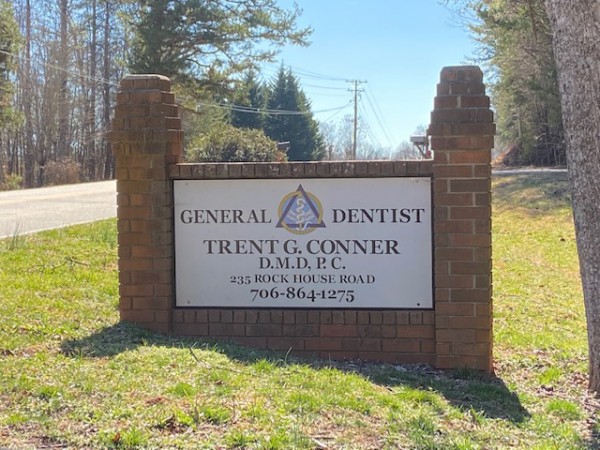 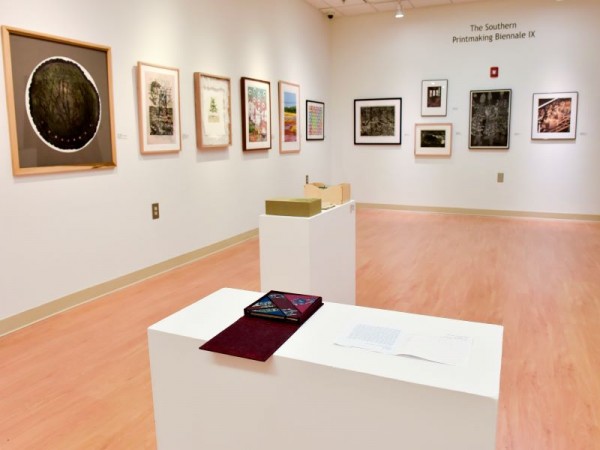 Artists exhibit work at UNG galleries
This spring, two artists will exhibit their work in galleries at the University of North Georgia.
By Tara Brolley

UNG Dahlonega and Blue Ridge campuses closed tomorrow due to winter weather predictions
The University of North Georgia Dahlonega and Blue Ridge campuses will be closed tomorrow due to predictions of winter weather in the area.
By Lauren Hunter
Privacy | User Agreement | Contact | Advertise With Us
2021 © Jacobs Media Corporation. All rights reserved. EEO Report. Website by Full Media
Login / My Access
close
Search