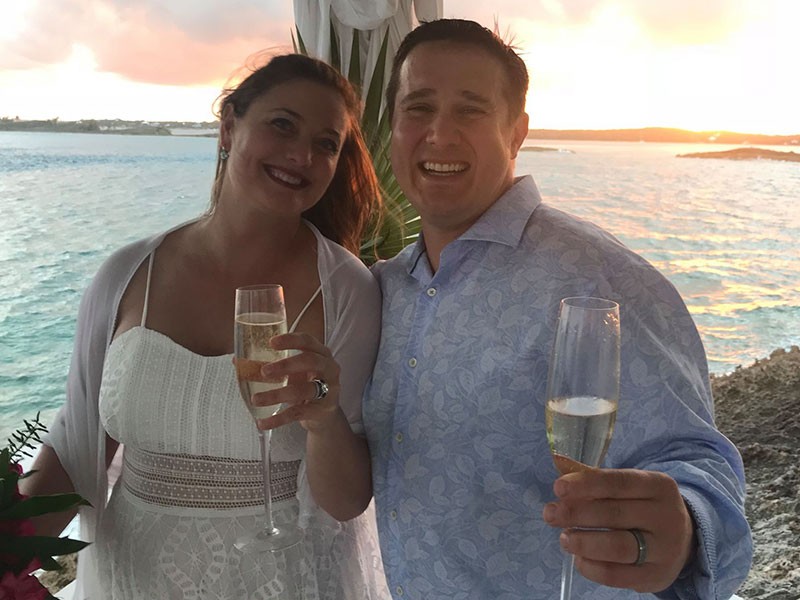 Dan Delnoce and Courtney Flanders at their wedding in the Bahamas in April of 2018. Delnoce and Flanders were killed in a plane crash in Gainesville on Friday, Feb. 26, 2021.
Photo: Russ Moore
Contact Editor

Friends said a Gainesville couple who died in a plane crash Friday were "beautiful souls" -- loving, happy, engaged and fun to be around.

Dan Delnoce, 44, and his wife Courtney Flanders, 45, were killed after the Cessna 182 they were in crashed in a neighborhood off Memorial Park Drive shortly after taking off from Lee Gilmer Memorial Airport in Gainesville. Dan Delnoce’s brother, Matthew Delnoce, 39, from Ohio, was also on board the plane and died in the accident. The group was headed to Daytona Beach, Florida.

“They were just super outgoing and gregarious people," said Scott Dixon, owner of Scott's Downtown restaurant and a close friend of the couple. "They were just the kind of people that, when you’re around, you can’t help but feel comfortable and engaged and happy."

As a pilot himself, Dixon said there are always inherent risks with flying.

“What happened, how it happened, why it happened or any of those things are really fairly inconsequential at this point because the bottom line is that … three beautiful souls are no longer with us,” Dixon said.

Investigators with the National Transportation Safety Board remained on the scene of the crash Monday, searching for clues that might tell them what happened to the ill-fated flight.

“They also worked in professions where they got to see and got to know a lot of people in the community, and I think that that goes a long way toward … how well-loved they are and how incredibly missed that they will be in the community,” Dixon said.

Dan Delnoce and Flanders each had two children from previous marriages, said Russ Moore, a close friend of the couple.

“Courtney’s got two girls, and Dan has a boy and a girl, ages between 8 and 15, give or take. They blended right in and the kids liked each other,” Moore said.

Dan Delnoce and Flanders were coming up on the third anniversary of their marriage, which occurred in an intimate ceremony in the Bahamas in April 2018, Moore said.

“Courtney’s dad had a house down there, and Dan’s mom went with us and it was just the four of us, and they hired an old preacher on the island to come over to the house and married them by the pool,” Moore said about the wedding.

According to Moore, Dan Delnoce would always dive deep into his passions, such as flying and cars.

Moore said he and his wife loved to travel and go to concerts with Dan Delnoce and Flanders, and they even recently took a trip to North Georgia for a special occasion.

“We were just with them on Valentine’s Day, and we went to Dahlonega and went to some wineries, and had dinner that night and spent the night with them,” Moore said.

One of Dixon’s favorite memories of Dan Delnoce and Flanders was a trip to see Jimmy Buffett live during what many would consider unfavorable weather.

“It was an outdoor concert and, you know, the weather was absolutely atrocious. We had thunderstorms and all kinds of rain, thunder and lightning, regardless of that, you could be with them and it would still be the best time, even with adverse situations,” Dixon said.

For those wishing to help the Delnoce family, a GoFundMe page was created Monday morning and had raised over $5,000 as of Monday afternoon.