Hamlin has another chance at history at Homestead 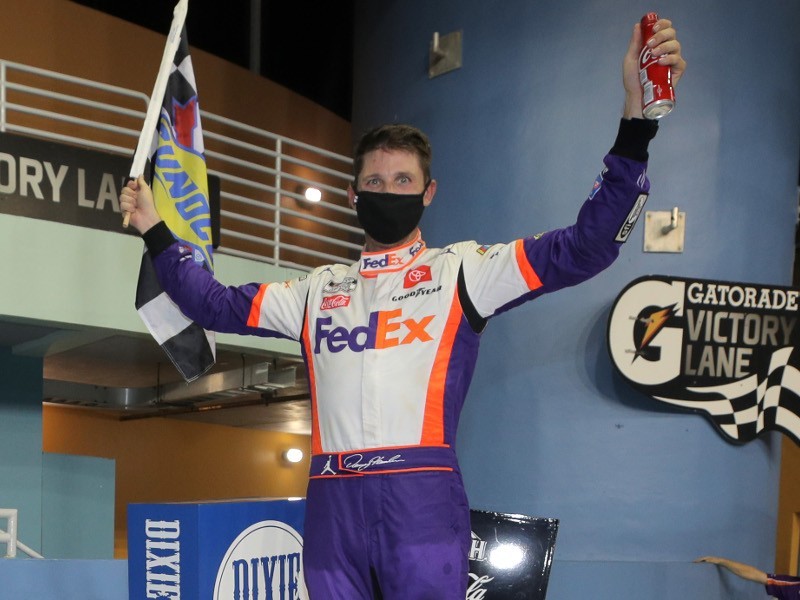 Denny Hamlin had a chance to make history in the Feb. 14 Daytona 500.

A victory in the Great American Race would have given the driver of the No. 11 Joe Gibbs Racing Toyota an unprecedented three straight. Hamlin ran well, sweeping the first two stages, but he was in fifth place when a last-lap caution made a winner of opportunistic Michael McDowell.

As the NASCAR Cup Series heads for Homestead-Miami Speedway for Sunday’s Dixie Vodka 400, Hamlin has a shot at another record. With three victories at the 1.5-mile track, he is tied with Greg Biffle and Tony Stewart for most wins at the venue, which has hosted Cup events since 1999.

Boosting his chances, Hamlin expects the season’s first race on an intermediate speedway to run closer to last year’s form than either the Daytona 500 or the Daytona Road Course event, both of which produced first-time winners (McDowell and Christopher Bell). Kevin Harvick led the series with nine Cup victories last year, followed by Hamlin with seven.

“I think it will be more status quo on where we were last year,” Hamlin said. “That doesn’t mean me and Kevin, since it’s a mile-and-a-half, that we are going to dominate. With the mid-tier teams, this is where the resources that they don’t have will come into factor a little bit more.

“I don’t think I would call the 20 car (Bell) mid-tier, and I don’t think I would call the 34 (McDowell) a shock, because we were at a superspeedway. I think the winners list is like, ‘Oh wow, where (are) our superstars?’ but we are about to get into a chunk of the season where you are going to start to see some of your normal winners in the bracket.”

Also arguing in Hamlin’s favor is his starting spot. With fifth and third-place finishes and his strength in the stages of the first two races, Hamlin leads the series standings and will start from the pole at Homestead. That’s exactly where Hamlin started last year, when he collected his third win at the track.

In fact, seven of the winners in 22 Homestead-Miami Cup races have started from the front row, three from the pole and four from the second spot. That’s good news for Joey Logano, whose victory at Homestead in 2018 locked up the series championship. Logano starts second on the grid on Sunday.

Nor can you ignore the “rim riders” who have had success running the wall at the 1.5-mile track. Tyler Reddick finished fourth at Homestead last year after claiming back-to-back NASCAR Xfinity Series titles by winning at the track. Kyle Larson, notorious for running the wall, has three top-five finishes in seven starts there.

Though only 22 years old, Santino Ferrucci already has a long history in motorsports, but none of that experience has come in stock cars.

A professional driver since age 14, Ferrucci spent two years as a test driver for the Haas F1 team, before turning to IndyCar full-time in 2019. That same year, he finished seventh in the Indianapolis 500 to earn Rookie of the Year honors.

In 2020, he ran fourth in the Indy 500. His only experience in a full-bodied car, however, was a super late model test for Fury Race Cars last year. Nevertheless, Ferrucci will make his NASCAR Xfinity Series debut in Sam Hunt Racing’s No. 26 Toyota in Saturday’s Contender Boats 250.

Last Saturday, Ty Gibbs won the Xfinity Series race on the Daytona Road Course in his first start in the series, but Gibbs had winning experience in stock cars in the ARCA Menards Series. Ferrucci doesn’t have that luxury.

“It’s tough showing up at Homestead cold turkey,” said Ferrucci, who will compete in the next five Xfinity races. “But my knowledge as a race car driver will always remain from everything I’ve done in my career — how to look at building cars, how to set cars up, my feelings from driving, my knowledge of how to do pit stops, how to race. None of that will go away, which is nice.”

Ferrucci won’t even get a chance to drive the car until Saturday, though he has spent time in the Toyota simulator.

“I’ve only got to sit in the car a bunch of times,” Ferrucci said during a video conference with reporters on Tuesday. “I don’t even have my firesuit yet. It’s kind of a funny process, but we don’t have too many expectations going into Homestead.

“You just want the car to come back in one piece, log some laps for us. We have five in a row, so there’s no sense in throwing away your first race trying to do something spectacular. It’s all about trying to be consistent and building up to it slowly.”

Ty Gibbs won’t be racing at Homestead this week. Another Ty — Ty Dillon — will be behind the wheel of the No. 54 Toyota Supra, assuring that Joe Gibbs Racing will have plenty of firepower. JGR’s Harrison Burton won the first of two races in one Homestead weekend last season, with the schedule compressed after a 10-week hiatus forced by the Covid-19 pandemic.

Burton’s most formidable competition is likely to come from Team Penske’s Austin Cindric, who opened the defense of his 2020 series championship with a victory on the Daytona oval and ran second to Gibbs on the road course. As the current series leader, Cindric will start from the pole in Saturday’s race.