The unsung heroes of the small screen ... 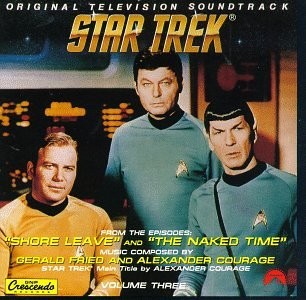 "FINALLY!" the man exclaimed, slamming his hand down in front of the box office window!  "At last, After twenty years of work, I've been recognized!"

The box office was located in the lobby of Candlewood Playhouse, a small theater in Danbury, CT, where I found myself interning in the summer prior to my senior year of college in 1986.  The man was Gerald Fried, a man with nearly a hundred compositions to his name that have been heard by millions of ears over the past six decades.  Fried was one of the prolific scribes that wrote for episodic television.  His credits spanned "Family Affair," "My Three Sons," "The Wild Wild West" and many others.  But naturally, the credit that made his name jump out at me from the envelope waiting for pickup was the work he did for "Star Trek."

Interestingly enough, his companion that evening was Bob James, whose daughter was playing Reno Sweeney in "Anything Goes" that night.  James is an accomplished jazz musician who provided the main theme and all of the incidental music for the acclaimed Emmy-winning sitcom "Taxi."

I have always been something of a soundtrack nerd, collecting Henry Mancini albums while my classmates were snatching up Led Zeppelin.  Mancini would draw credit alongside Blake Edwards in the 50s with his soundtrack work for "Peter Gunn" and "Mr. Lucky."  Both series drew multiple soundtrack albums, and "Gunn" was a Grammy winner.

As anyone who knows me can attest, I've probably seen every episode of the original "Star Trek" series dozens of times.  And growing up with the series, the music became especially engrained into me because of a process known as tracking.  When a composer provides exceptional music for a given episode, the producer may elect to save money later in the season (particularly in an expensive show like "Star Trek" and "The Wild Wild West") by tracking the same tunes in later episodes, rather than paying the expense of an original score.  Fried was among "Trek"'s most tracked composers, because his scores were downright magical.  The composer disliked the practice however, thinking that in some cases, his music didn't work for the scene it was enhancing.

Tracking was a commonplace occurrence.  When Sheldon Leonard was producing "I Spy," he hired the composer he'd worked with before on "The Danny Thomas Show," "The Dick van Dyke Show" and "The Andy Griffith Show," Earle Hagen.  You may not know the name, but you sure know his lips!  It's Earle that whistles the playful tune known as "The Fishin' Hole" during the credits of "The Andy Griffith Show."

Hagen scored each of "I Spy"'s 81 hours individually.  When he approached :Leonard for a raise in the series' second season, the producer was astonished to learn that each of his episodes had gotten its own individual score.  Recognizing how much Hagen's contribution meant to the top-rated show, he granted him the raise.

I have a playlist on my laptop and phone called "Television's Greatest Hits."  It consists of literally hundreds of television theme songs, classic commercial jingles, scores and incidental music.  With my recent acquisitions of the soundtrack sets for "Voyage to the Bottom of the Sea," "The Streets of San Francisco" and "The Invaders," the collection has expanded to literally more than four days' worth of music.  I love this list because of the variety in styles.  Most of the list sounds like classical or jazz, but there's soul music, country, pop, rock and roll, etc.  And many of the pieces are shorter than three minutes, so if you don't like it, just wait it out!

Several years ago, I discovered a company called LaLaLand records.  They sold me soundtracks for "My Favorite Martian" and "The Wild Wild West" that went out of print EXTREMELY quickly.  Most, if not all, of their soundtracks are limited to 2000 or so pieces.  I spent a pretty penny with them for complete scores from "Mission: Impossible" and the granddaddy of 'em all, "Star Trek."  I've also picked up CDs containing the scores for "Dan August," "Cannon," "Barnaby Jones," "Dark Shadows," "The Prisoner," "Doctor Who," "Sherlock" and two sets from "The Rat Patrol."

Much of the fun is observing how much of the music for these programs come from the same composers.  They really are a rather small fraternity.  Fried pops up everywhere, as does Richard Markowitz, Fred Steiner, Sol Kaplan, Lalo Shifrin, Walter Scharf and "Rat Patrol" composer Dominic Frontiere. It doesn't matter to me that I've never seen a minute of "Dan August." A Steiner score is a Steiner score. Much of my reluctant affection for "Matt Houston" comes from the intense theme music composed by Frontiere, and yes, I'll pick up that soundtrack if it becomes available.

Credit is also due Jon Burlingame, a soundtrack historian who has written liner notes for many of LaLa Land's releases and who is credited as a producer on a few sets as well.  Much documentation is made of the clean-up and restoration efforts of this music.  As is the case with hindsight, very little thought was ever given to the potential of eventual release of this music, basically relegated to the background of the programs and not meant to be noticed.  Burlingame did actually the lion's share of the recovery work that led to the restoration of the music from "The Wild Wild West."  Sadly, that soundtrack is absent the beautiful baroque duets sung by Michael Dunn and Phoebe Dorin on the episodes that featured supervillain Dr. Miguelito Loveless.  Burlingame did find Loveless' signature theme, a twelve-note descent of insanity that punctuated each and every appearance.  He also recovered a delightful piece of music that represented Ross Martin's impish master of disguise Artemus Gordon, and the stunning work for "The Night of the Puppeteer," composed by "On Golden Pond" scribe Dave Grusin.

Did you ever wonder what composer's music is heard most frequently around the world?  Beethoven?  Bach?  Benny Goodman?  No, how about Mike Post, the erstwhile TV theme king?  He hit the top ten on the Billboard charts with his TV themes for "The Rockford Files," "Hill Street Blues," "The Greatest American Hero" and "Magnum, P.I."  He has also provided the signature tunes for "Doogie Howser," "Law and Order," "NewsRadio," "The White Shadow" and many others, and at any given time, three of his theme songs are playing somewhere on planet Earth.

My collection spans soap opera, game shows, adventure, detective, comedies and science fiction.  So what's still on my wish list?  I'd love to see Mike Post release another collection of his music.  I'm especially looking for his theme for "NewsRadio" and the one that he created for the return of Columbo and Kojak in the 90s, "The ABC Mystery Movie."  And how about "Columbo?"  What wonderful music was scored for that program.  Most Columbo killers had their own musical motif, and the great Gil Melle composed a jazz riff used in the first season that would have made a great theme song for the sleuth, who was the only spoke of the Mystery Movie wheel NOT to have his own theme song.  Oh, and the composer of that famous opening tune that featured the shadowy mystery man with a flashlight?  Yep.  Henry Mancini.

Clearly I'm not the only soundtrack nerd out there.  As I mentioned before, LaLa Land releases frequently sell out quickly and go out of print.  I encourage you to visit www.lalalandrecords.com to see what's out there. They offer movie soundtracks as well, and more contemporary TV work such as "The Orville," "Buffy, the Vampire Slayer," "24" and more.  But don't dawdle.  The collection you covet may not be there by the time you get home from work!