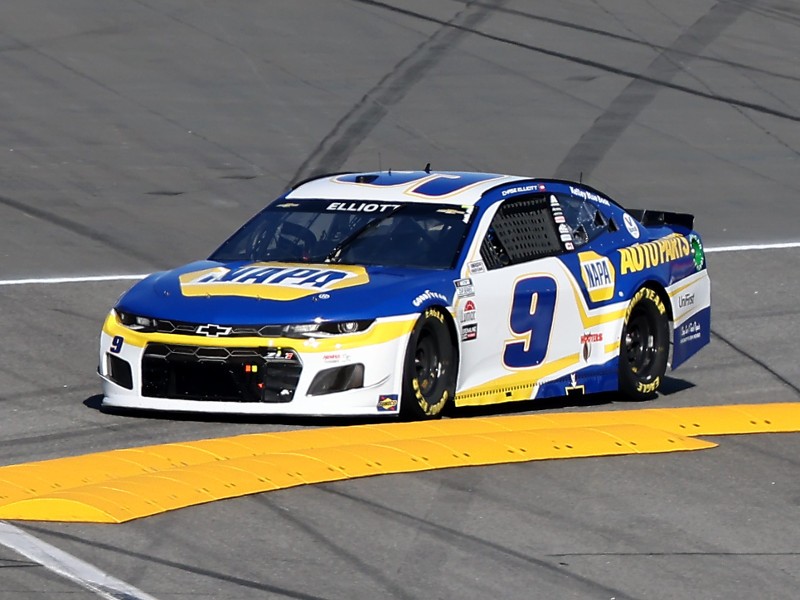 For most of Sunday’s NASCAR Cup Series race on the Daytona International Speedway road course, it looked like nothing could stop Chase Elliott.

After starting on the pole, the Dawsonville, Georgia speedster dominated the day, leading 44 of the race’s 52 laps. Elliott appeared to be en route to his fifth straight series road course race victory.

But Mother Nature played a bit of a hand, robbing NASCAR’s “road course king” from a chance to add to his crown.

Elliott dominated most of the event, winning the first segment easily. A slow pit stop during a lap 27 caution lost him some ground and opened the door for Denny Hamlin to win the second segment. Elliott charged back to the lead on lap 40.

Elliott had the race in hand until the caution flew on lap 14 when a rain shower moved in over portions of the speedway. The No. 9 team opted to hold onto the lead and not change to wet weather tires, which all teams had the option to do per NASCAR rules. Several of the leaders hit pit road for fresh dry weather tires as the rain moved out of the area.

On the restart, Elliott went to work trying to make up ground, but took an off-track excursion while trying to race three-wide with Corey LaJoie through the infield portion of the course.

After a caution for a problem for Tyler Reddick, Elliott went back on the charge. Contact again between he and LaJoie in turn 5 sent LaJoie into the wall, leading to another caution.

Back under green, Elliott had moved up to sixth place, and was challenging Brad Keselowski for fifth in turn 6 when he spun after contact between he, Keselowski and Hamlin.

That derailed his day. He would recover to finish 21st.

“I hate it. I made too many mistakes,” said Elliott. “We went off track and it was just a bad deal. We had a fast NAPA Chevy and I appreciate the effort. I hate it for Corey (LaJoie). He ran me off there, so I thought he was going to take the lane again, so I went to cross him over and I think that time he was actually going to give me the lane. So, go figure. But we’ll try again next week.”

For the second straight week, Joey Logano appeared to have a victory at Daytona International Speedway within his grasp.

Last week, contact with teammate Brad Keselowski with half a lap to go sent Logano spinning, costing him a win in the Daytona 500.

On Sunday, on Daytona’s infield road course, it appeared that Logano was going to be able to rebound with a victory.

When NASCAR brought out the caution flag for rain around portions of the speedway, Logano was one of 11 cars that stayed on track when the leaders pitted for fresh tires.

Logano inherited the lead, and drove his No. 22 Ford to a healthy lead as the laps wound down.

But Christopher Bell, racing on fresher tires, began to close over the final laps. Coming to the white flag, Bell got a run on Logano coming out of the final chicane, and had the lead crossing under the flag stand.

From there, Logano could only watch as Bell drove away to his first career NASCAR Cup Series win.

Logano held on to finish in second place.

“He was the one that got through with tires,” said Logano. “One more lap. One more caution lap would have been enough to at least have a door-to-door finish across the line maybe, I don’t know. It’s hard. When he starts catching you a second a lap. Gosh, I was just trying to get all I could on that restart, trying to get out there as far as I could because I knew as soon as those guys with tires were gonna catch us really quick, but we’ve made gains with our Shell/Pennzoil Mustang on road courses, but we’re not quite good enough yet.

“As you can tell, our long run speed is off. We’ve got to keep working to get that better, but we maximized the day. I hate being that close, but congratulations to Christopher. It’s his first win and I know that means a lot. It’s always a special one, so I’m happy for him, but no so happy for myself at the moment.”

Kurt Busch Bounces Back From Spin For Top Five Finish

Kurt Busch had the rebound of the day on Sunday at Daytona.

After beating his competitors off pit road during caution flag pit stops, Busch powered around Daniel Suarez and Matt DiBenedetto – who had stayed out while others pitted – to take the lead of the NASCAR Cup Series race on Daytona’s infield road course.

With Christopher Bell, Martin Truex, Jr. and Chase Elliott in pursuit, Busch set sail to try to gap the field in his No. 1 Chevrolet.

While navigating the infield portion of the 14-turn road course, Busch’s car made contact with a curb, sending him out of control and flying through the grass before spinning.

To add insult to injury, there was no caution, meaning he lost a ton of ground on the leaders as he righted his car.

But fortune smiled on Busch late in the going. When the leaders hit pit road with 14 laps to go, he was one of 11 cars, along with Joey Logano, to stay on track. That put him third on the restart, and he quickly moved his way to second behind leader Joey Logano.

Over the closing laps, Busch lost ground to Bell and Denny Hamlin, who had fresher tires, but still came home with a solid fourth place finish.

“Man, I just crossed over that fine-line of grip and the car – it’s there, but I was just over-driving,” said Busch. “The tires at this track, with the worn-out asphalt in that infield section, is really easy to step over the line. I actually took a deep breath and just said ‘stay cool, stay cool’, and then I pounded that curb and it shot me straight out.

“Matt McCall (crew chief), all my guys – they had an awesome day on pit road, strategy-wise and with their stops to get us that track position and to get us back up front. If I’m going to make a mistake, it’s on me to then dig us out of that hole and stay out there on old tires. Really good points day; top-five I think in all the stages. So, that’s a good checkmark to bounce back after the Daytona 500.”