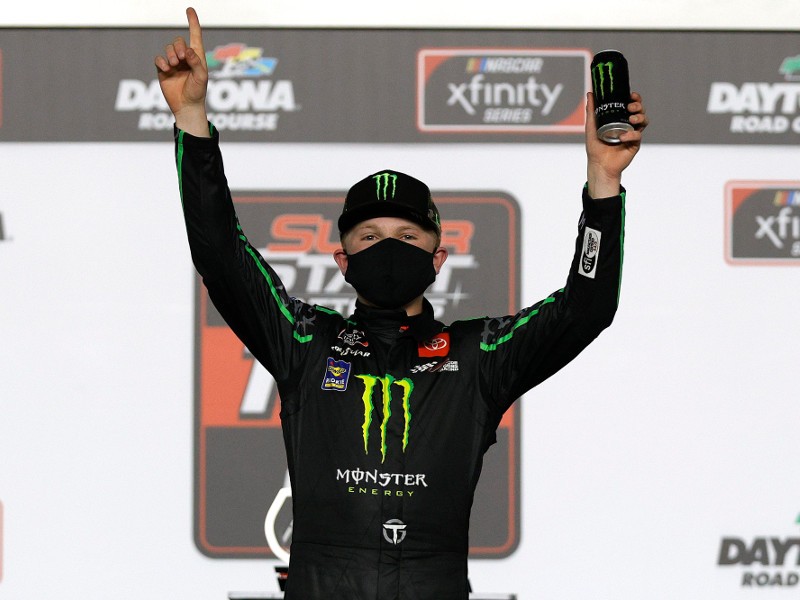 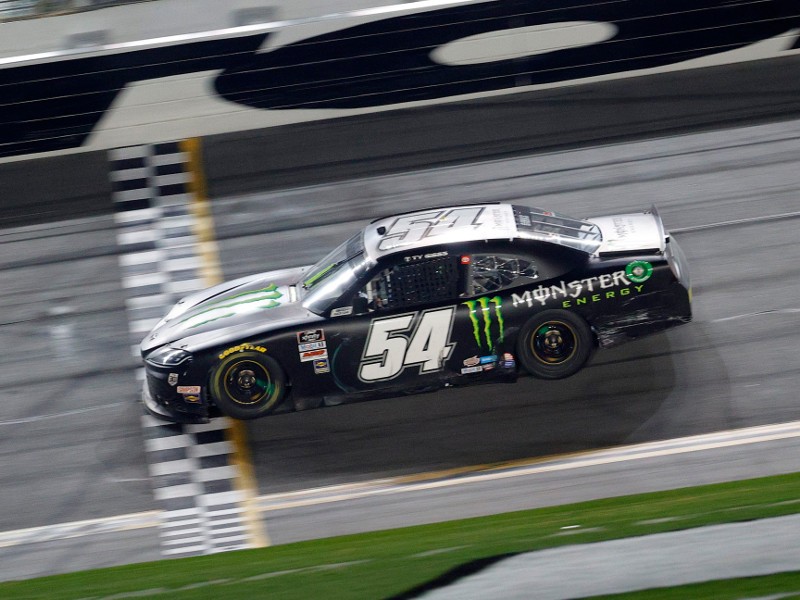 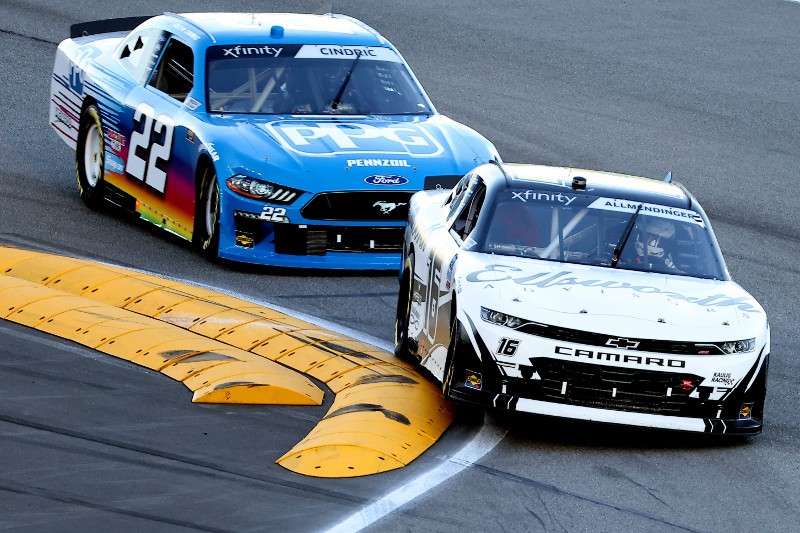 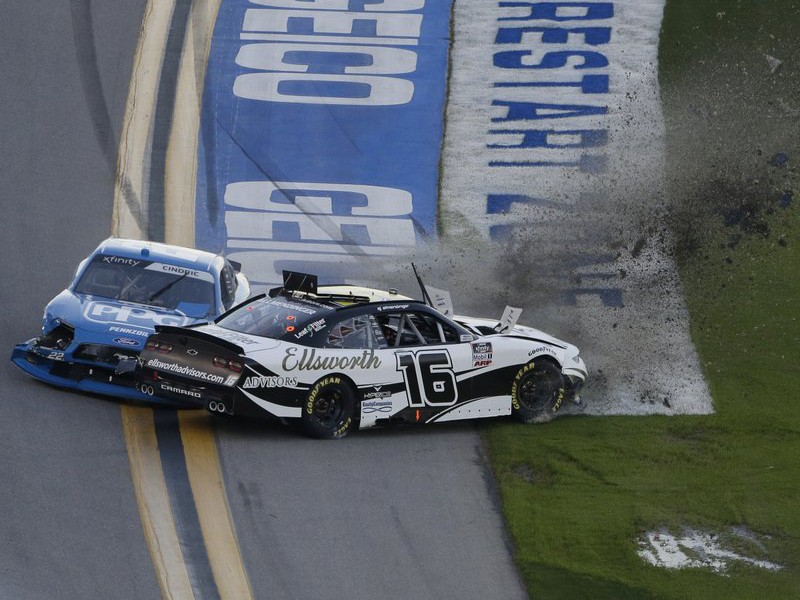 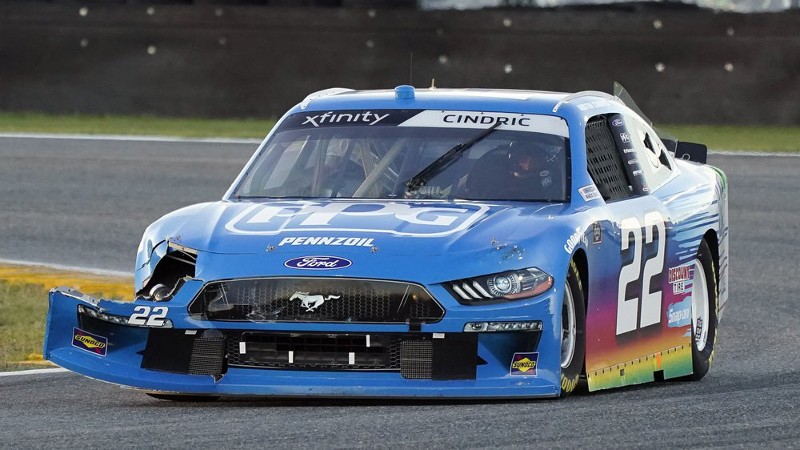 Ty Gibbs comes from a history making family. His grandfather is Pro Football and NASCAR Hall of Famer Joe Gibbs, after all.

The younger Gibbs wrote his own page of history on Saturday night, as the 18-year-old held off defending NASCAR Xfinity Series champion Austin Cindric to score his first series victory in his first career series start on Daytona International Speedway’s infield road course.

“You know, I can’t thank everybody right now. This is like a dream come true to me,” said an emotion Gibbs. “This is awesome, I can’t do burnouts, that’s one thing I cannot do at all. I just can’t thank everybody, this is just a dream come true to me. I really didn’t think I had it there. Kind of fought back and we won. Thank you to Monster Energy and everybody, I don’t even know what’s going on.”

Gibbs becomes the sixth driver overall driver to win in their series debut, and the third youngest winner in the series behind Joey Logano and Chase Elliott.

He then had to hold off Cindric over the final two laps to score the victory.

“I don’t even know how I kept going,” said Gibbs. “It was the man above. He’s done everything for me. He put me in this great family and in this great situation in life. I feel like I had to earn a lot of respect tonight, and I don’t think I did a too good of a job. I hit the grass and kept on rolling. I have no words. I just won at Daytona.”

The win makes Gibbs the youngest series winner on a road course – a distinction previously held by Cindric.

Cindric had to come back from an early setback to battle for the win. He was racing with A.J. Allmendinger for the lead at the end of segment one of the race when the two made contact coming to the finish line. Cindric’s car was left with serious right front damage, while Allmendinger’s car suffered enough damage that he eventually had to exit the race.

Riley Herbst’s car was also severely damaged by the grass in the infield while avoiding Allmendinger’s stationary car, eliminating him from the race.

As Cindric began working his way back through the field, Gibbs battled with his JGR teammate, Harrison Burton, for the race lead. On lap 21, Gibbs moved to the point, and went on to win the second segment.

Meanwhile, Cindric had raced back into the top 10 by the end of the segment, coming across the line in sixth.

On lap 35, Cindric moved back to the lead, while Gibbs had moved up to third. After a lap 40 restart, Gibbs was again on the charge, driving up to second by lap 41.

Cindric and Gibbs would put on a spirited battle for the lead over the next several laps, with Cindric holding the measure each time. Cindric had managed to sake off Gibbs and had pulled out to a healthy advantage with three laps to go. That went away when the caution flag flew for tire debris on the backstretch, sending the race into overtime.

Cindric and Gibbs led many of the leaders down pit road for fresh tires, while nine cars, led by Tucker, Georgia’s Ryan Sieg, stayed on track, gambling on track position over fresh rubber.

But Sieg overshot the first turn on the restart, while Gibbs took and off-track excursion and he and Cindric split the slower cars to make up ground. When three cars spun moments later, the caution flew again and set up a second overtime restart.

Cindric tried to close on Gibbs over the final lap, but could not get close enough to make a run as Gibbs went on to score the win.

“The family is everything to me, they do so much for me,” said Gibbs. “I just can’t thank them enough, this is just amazing; this is a dream come true. It’s all the man above, I’m sorry I’m a wreck I didn’t think this was going to happen at all. This is awesome, I can’t thank everybody enough watching and last week I had a terrible interview. I want to apologize for everybody, I just can’t thank everybody enough. This is just amazing.”

Cindric had to settle for a second place result.

“Obviously, I don’t want to be racing to a stage probably that aggressive,” said Cindric of the contact with Allmendinger. “I’d love to see a replay. Just hopefully we can avoid something like that because A.J. and I were gonna be fighting for a win later today, so I hate to be able to do that much damage to our PPG Ford Mustang that early. It just seemed like he was trying to block, whether if he didn’t know I was there or not. It sucks. It’s over with, but we salvaged a great day out of it.

“Congratulations to Ty. That’s obviously really cool. Congrats to him and his family. P2, I’ll take it.”

Daniel Hemric finished in third, with Brandon Jones in fourth and Jeb Burton in fifth.