Region 8-4A: Lady Dragons hold off Branch for 8-4A crown 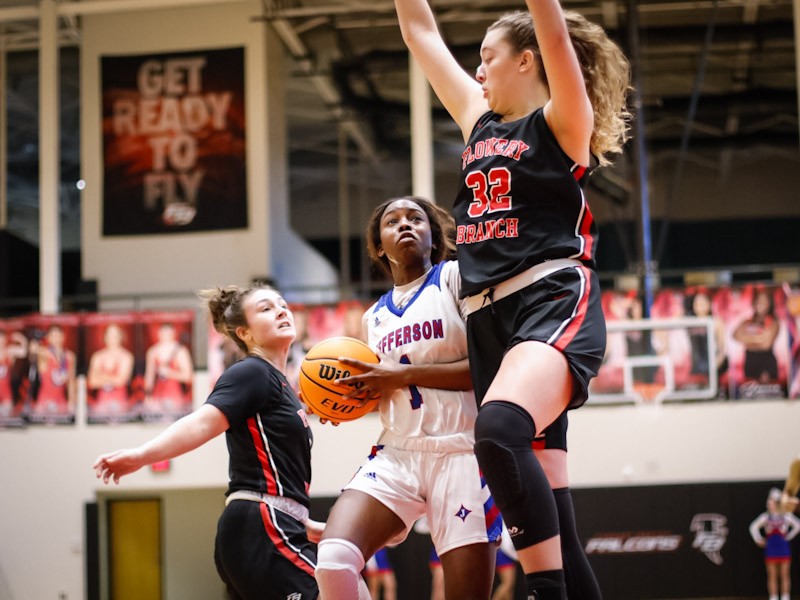 FLOWERY BRANCH — As far as game plans go, both the Jefferson and Flowery Branch girls executed near-flawlessly on defense in the Region 8-4A title showdown Saturday at the Flowery Branch gym.

In the end, however, the Lady Dragons just had too many offensive weapons as they pulled away in the second half for a 42-33 victory to capture their second straight region title. Jefferson (21-4) won the 8-3A crown in 2020.

“Defensively both teams played tough but I thought we were really good the entire game,” Jefferson coach Greg Brown said. “We talk about holding teams to 10-points or less in each quarter and we did that for three of them.”

After scoring 11 in the first quarter, Flowery Branch was held to 9, 6, and 7 points in the remaining three.

Region 8-4A Player of the Year Livi Blackstock showed her worth breaking down the Lady Falcons on three critical possessions late in the third quarter to break open a tie at 26. Two consecutive fastbreak layups, a free throw after another sprint down court, and a dish to Tylia Brown, who drained a long 3-pointer to cap a 10-0 run into the fourth quarter, is just what Brown expects of Blackstock in the big games.

“We wanted her to try and get some quick baskets before (Branch 6-foot-3 center Ashlee Locke) could get down court and get set,” Brown said. “Those were huge. Then it was just a matter of continuing to play good defense. I’m just real proud of how they executed what we wanted to do.”

Despite the loss, the Lady Falcons (12-14) are riding high at just the right time. Locke is back after missing 25 days due to contract tracing and they have won six of their last eight overall, including a late-season win over the Lady Dragons.

“I thought we did a great job on defense,” Branch coach Courtney Newton-Gonzalez said. “Our goal was to keep them in the 40s and we did that. But that also meant slowing the game down and then (offensive) possessions become even more important. We just didn’t hit the shots when we had them.

“But I feel like we are peaking at the right time. We’ve been playing really well the last two weeks and I like where we are heading into the playoffs.”

Both teams will host Class 4A first round playoff games next week. Jefferson will take on North Clayton at The Arena while the Lady Falcons will entertain McDonough. Both games are expected to be on Tuesday but nothing has been determined as of yet.

Until Blackstock took control late in the third quarter, it was a back-and-forth defensive slugfest.

The Lady Falcons jumped out to a 6-2 lead after a pair of offensive stickbacks and two inside baskets by Locke, who finished with 13 points. They pushed the lead to 9-4 on a Morgan Aguilar 3-pointer.

But Jefferson held Branch to just one Locke basket over the next four minutes into the second quarter and used its own offensive rebounding, and Aguilar picking up her third foul, to spark an 8-0 run for a 14-11 lead.

From there the teams traded three lead changes with the Lady Dragons taking a 22-20 lead into halftime.

The tough defense on both ends was a factor. Jefferson forced 9 Branch turnovers that led to six points while the Lady Dragons had just 4 turnovers in the half.

The teams traded baskets over the first three minutes of the third quarter with Locke tying the game at 26 on a basket with 5:18 left in the period.

However, turnovers -- six more in the third quarter -- continued to plague the Flowery Branch in the second half. The Lady Falcons went scoreless over the last 5:18 of the third while Jefferson closed out the period on a 6-0 run for a 32-26 lead.

Blackstock had a game-high 15 points, 11 coming in the second half, to pace Jefferson. Deshona Gaither had 8 for the Lady Dragons.