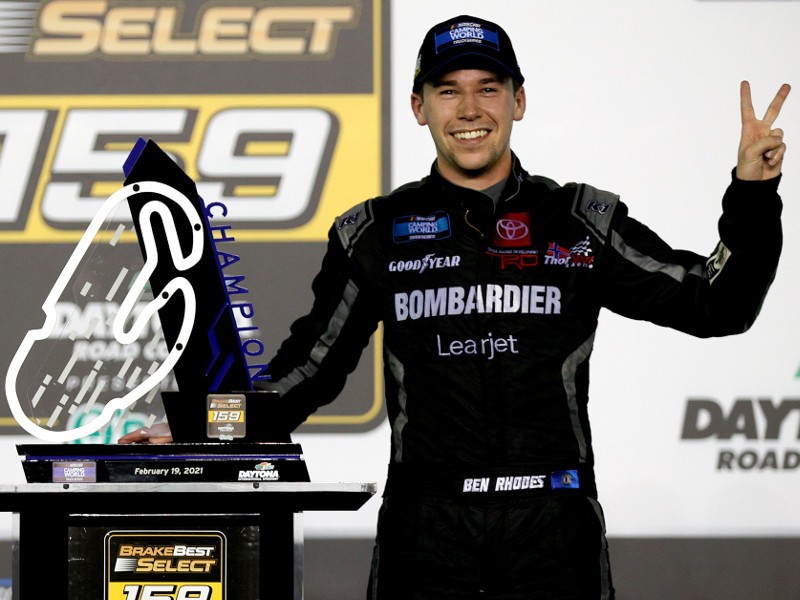 It took three overtime starts to secure the victory over 2020 series champion Sheldon Creed, but Rhodes’ work in the No. 99 ThorSport Racing Toyota marked only the third time in series history a driver has opened the season with back-to-back wins. And it marked the 200th victory for Toyota in the NASCAR Camping World Truck Series.

Rhodes crossed the finish line .320-seconds ahead of Creed – the running order frozen, however, when a caution – one of 10 on the night – came out with a half-lap remaining in overtime.

John Hunter Nemechek, who won Stage 1 and led 14 laps on the night, finished third. Todd Gilliland, who started 31st, rallied to an impressive fourth-place finish and Riley Herbst rounded out the top five.

Matt Crafton, Derek Kraus, Kaz Grala, Timmy Hill and Christian Eckes completed the top 10. Rookie Hailie Deegan was running in the top-10 until a spin on the final lap of overtime. She finished 28th.

“Unbelievable, I don’t even have words for it,” Rhodes said after climbing out of this truck just below the flag-stand on the frontstretch. “I don’t even know what to say, this is so cool.

“I just have to thank my team. The Bombardier Tundra was fast all day. ThorSport Racing gave me a truck that handled this year and we were fast. Rich (Lushes) is a really good crew chief. It’s good to be paired up with him and all of the guys on my team. I’m just thrilled. I don’t know what to say. I’ve been on cloud nine all week, so it’s above that. I’m just so happy.”

Certainly, Rhodes was in a celebratory mood following the race, but it was a tense finish. He was about 50-yards shy of the flag-stand on the first overtime period when a caution came out extending the race instead of earning him the trophy then.

He and Creed – who led a race best 17 laps – dueled for the lead multiple times in the closing laps, often exchanging the point during the infield series of turns of the road course.

“Never fun being the first loser,” Creed said. “But my guys brought a fast truck and I felt like we were on top of the strategy there going to slicks early. Man, got hit by a lapper there leading and I don’t think that did us any favors and got to the lead, saving fuel and then worked way back to the lead got pushed out the way on the restart, just doing everything I could there. Wished it could have stayed green.”

The race started under wet conditions with teams having to decide when the track was dry enough to switch from rain tires to slicks or “dry” tires. Nemechek was the early leader – pacing the field for the opening 14 laps until his No. 4 Toyota suffered an oil pressure and fuel pick-up problem, leaving the Tundra on track and necessitating a caution. Later he ran out of gas and at one point was a lap down to the leaders before racing back to the front in the closing laps.

Rhodes had to deal with Creed and then ultimately Nemechek’s comeback as well, to earn his fifth career victory.

“It was the most stressful race of my life for sure,” said Rhodes. “There’s been stressful races, but this was really stressful. I thought it was going to be taken away from us for sure.

“I’m not sure if they showed me throwing my hands up, I hope they didn’t. Hope they didn’t listen to the radio either. I was a little frustrated. Gosh, it all worked out now. So stressful, so stressful. I don’t think I’ve had one that stressful before.”