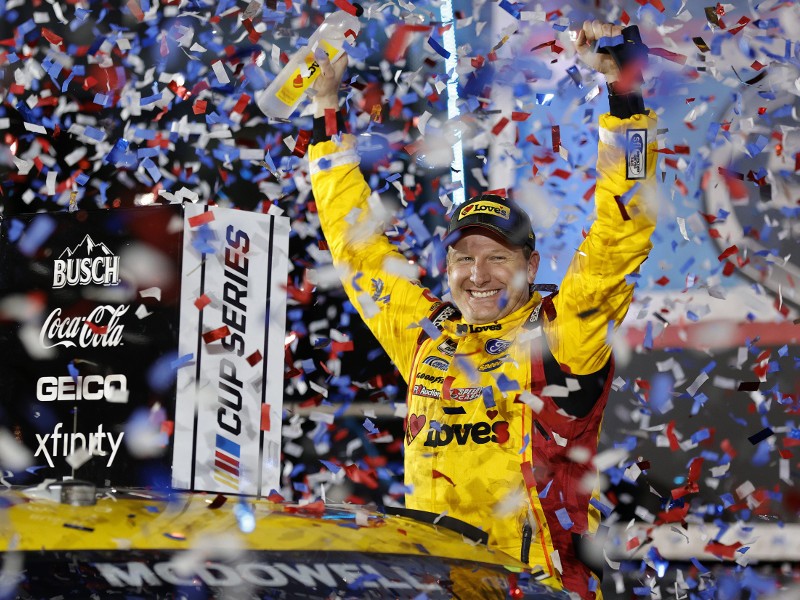 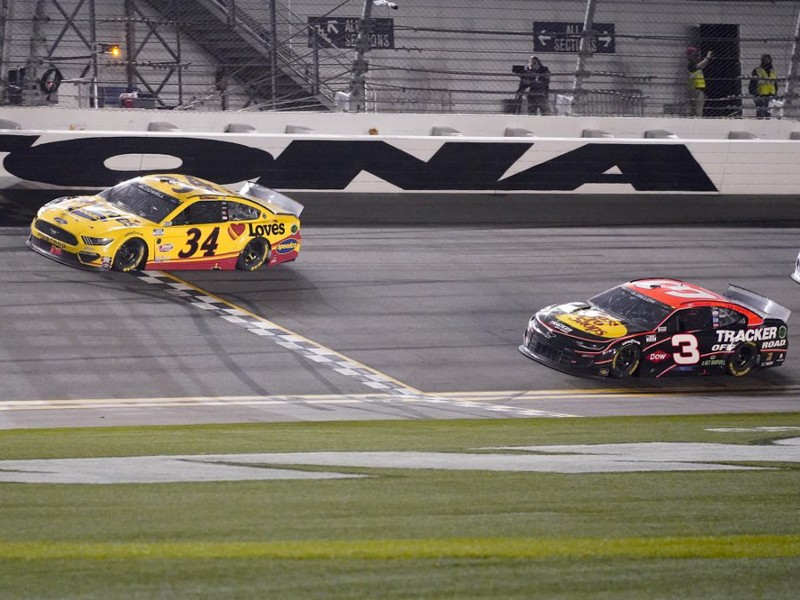 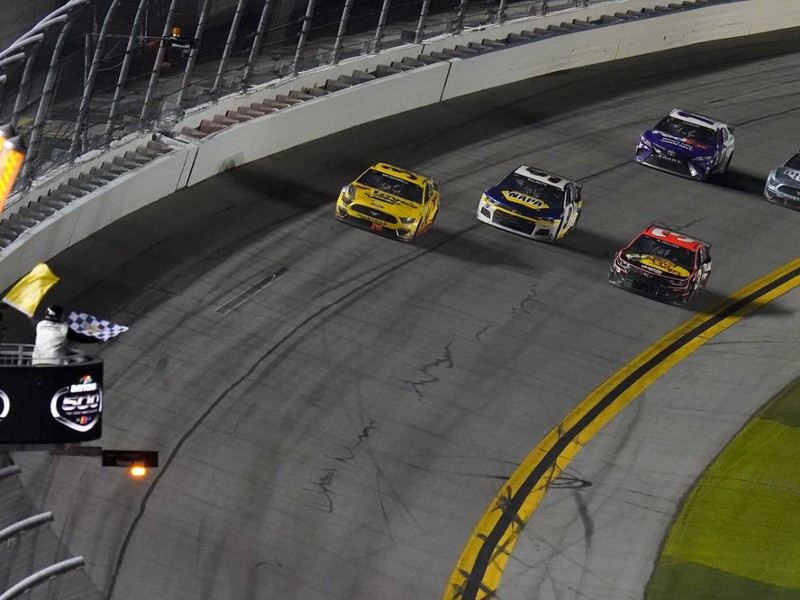 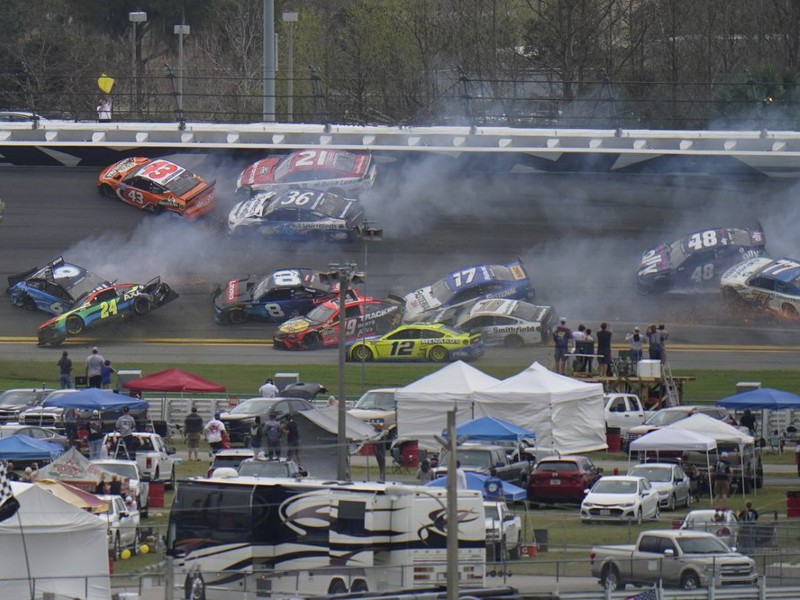 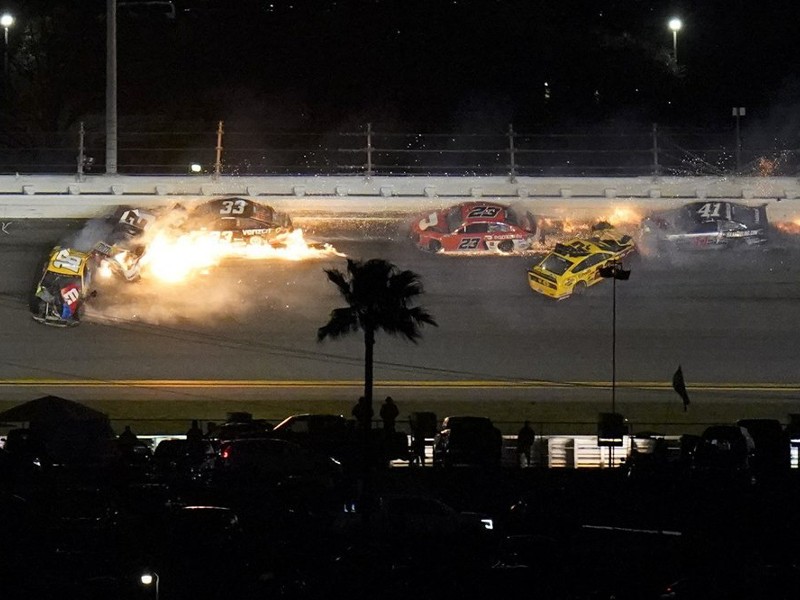 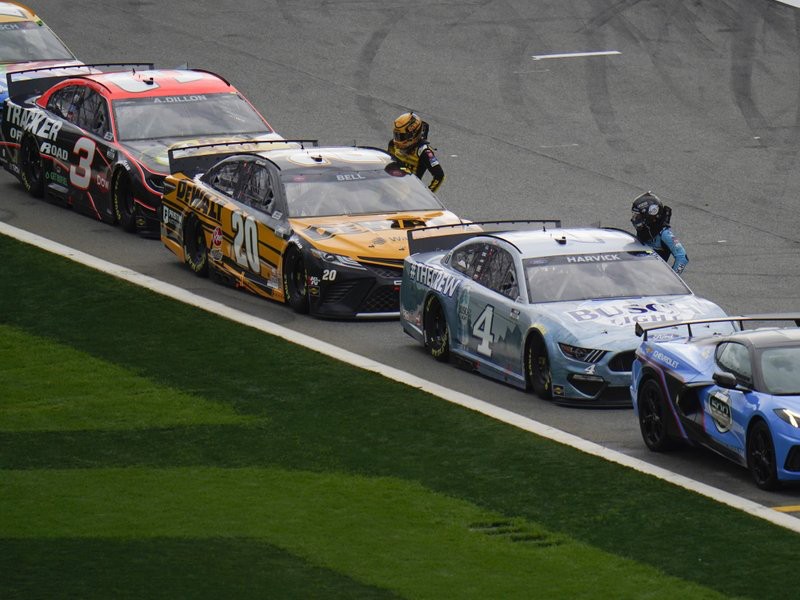 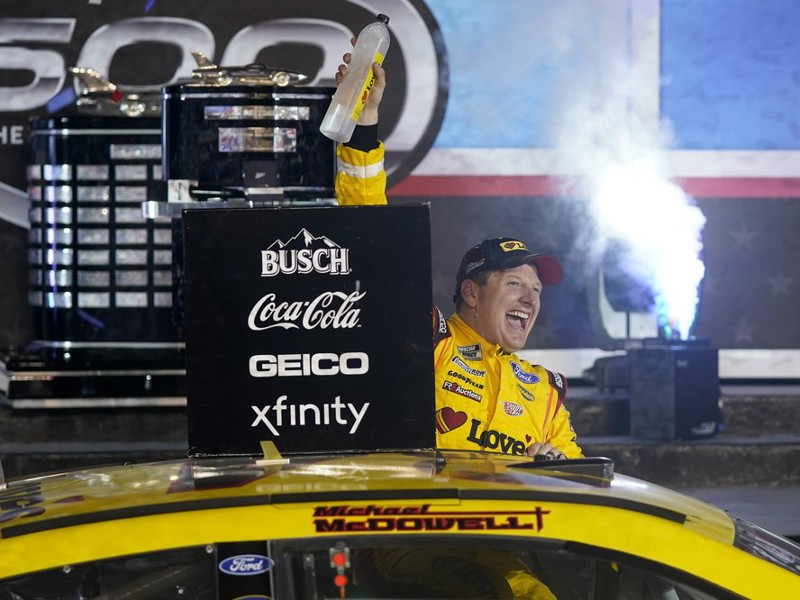 Michael McDowell drove through the middle when teammates Joey Logano and Brad Keselowski made contact with half a lap to go and drove to one of the most improbable Daytona 500 victories in the 63 year history of the event.

McDowell was running in third and gave a shove to Keselowski as the lead trio powered down the backstretch for the final time.

That gave Keselowski a run on leader Logano, with the two making contact as Logano tried to block the run. That impact sent both cars spinning, with McDowell shooting the gap between the two. The caution flew seconds later, giving McDowell the victory by about a car length over defending series champion Chase Elliott.

It’s the first win for the 36-year-old Phoenix, Arizona native in 358 career NASCAR Cup Series starts, and the third for car owner Bob Jenkins and the Front Row Motorsports team.

“I just can’t believe it,” said McDowell. “I’ve just got to thank God. So many years just grinding it out and hoping for an opportunity like this. I’ve got to thank Love’s Travel Stops, Speedco, Bob Jenkins for giving me this opportunity. I’m so thankful. Such a great way to get a first victory – a Daytona 500. Are you kidding me?

“I just want to say hi to my wife back home. Happy Valentine’s Day. I know it’s been a tough week. My kids, I love you guys. I wish they could be here with me to celebrate. Maybe NASCAR will send a plane to bring them down here, but we’re the Daytona 500 champions. Thank you Doug Yates, Ford. We had our Ford partners at the end and they all crashed, but luckily I was able to make it through. I’m just so thankful. God is good.”

As McDowell scored the win, several cars were gathered up in the crash between the two leaders. Keselowski’s car slid up the track and was hit by Kyle Busch, sending Keselowski’s Ford into the air against the wall with flames shooting out from underneath. Rookie Austin Cindric was gathered up, along with Ross Chastain and Bubba Wallace, among others. Fortunately, there were no injuries.

“My plan was to stick to the 2 car (Keselowski),” said McDowell. “I knew he would go for a race-winning move and my plan was to let him make that move and then coming off of four try to get to his outside or inside. I knew I didn’t want to make my move too early, so I was committed to the 2 car’s bumper and when he made the move, the hole opened up. It’s just unbelievable.”

“I had a big run down the backstretch and wanted to make the pass to win the Daytona 500 and it ended up really bad,” said Keselowski. “I don’t feel like I made a mistake, but I can’t drive everybody else’s car, so frustrating. The Discount Tire Ford was not the fastest, but Jeremy Bullins and the whole team did a great job of keeping us in position and right then we were in position. It’s exactly where I want to be running second on the last lap at Daytona with this package and had the run, made the move and it didn’t work out.”

When Logano was asked what happened, he said “Pandemonium, I guess. Chaos struck. The 2 kept trying to back up, trying to get a run. I was trying to back up to him to keep the runs from being too big and just, I guess he got to the back of the 34 and it ended up being a really big run coming at me and it seemed like we all just collided in one spot.

“It’s a real bummer that none of the Penske cars won, but at least a Ford won and I’m really happy for McDowell. I hate that we didn’t win with our Shell/Pennzoil Mustang. I feel like we had a great shot being where we were and leading on the last lap, but if we couldn’t win I’m really happy to see McDowell win this thing. He’s a great guy, a great person, a good leader in life and has helped me a lot in my life, so it’s very cool to see him win the Daytona 500.”

Sunday’s race got underway shortly after 3 pm, but was halted under caution for a massive 16-car crash at the end of the backstretch on lap 14 after the second place car of Aric Almirola was turned from behind by Christopher Bell, setting off a chain reaction accident.

Among the cars caught up in the crash were both front row starters, pole sitter Alex Bowman and William Byron, along with Ryan Newman, Matt DiBenedetto, Ryan Blaney, Erik Jones, Kurt Busch, David Ragan, Martin Truex, Jr. and Tyler Reddick, among others. No one was injured in the crash, but several pre-race favorites were eliminated.

The race was red flagged on lap 15 when lightning was detected in the area, leading to a mandatory 30-minute delay. Moments later, heavy rain began pelting the 2.5-mile speedway.

That left the race under the red flag for the next 5 hours and 40 minutes. Back under the green flag, it became the Denny Hamlin show, as the driver of the No. 11 Toyota seemed to be able to lead at will. Hamlin would go on to win the first two segments of the race.

The final segment of the race ran mostly clean, as drivers focused on getting themselves in position for the final moments to contend for the win.

That was where Hamlin ran into trouble. With teams pitting among their own makes on the final round of green flag pit stops, the Ford teams, led by Kevin Harvick, came to pit road first, with the Chevrolet teams coming in the next lap. Both of those camps stayed close, forming fast packs when they exited pit road.

When the four Toyota teams, led by Hamlin, came to pit road, they found themselves separated by large gaps, which kept them apart as they came back on the track.

That allowed the pack led by Logano to bypass the Toyotas. Logano would assume the lead while Hamlin found himself buried in 12th position trying to find a way forward.

“We got on-and-off pit road too good. I was just too far ahead of the pack,” said Hamlin. “I figured the Chevys would make a move from two or three to go, because they are not going to win on the last lap from fifth or sixth. I was able to gain some positions. I think I was 12th and everybody was running single file, so it handcuffed me. I couldn’t really do anything.”

The pack would stay mostly single file until coming to the white flag, when Harvick found himself shuffled out and McDowell latched onto the back bumper of Keselowski, setting up the finish.

“It’s unbelievable and I’m so thankful, but I’m thankful to have a happy, healthy family and a beautiful wife and a great family,” said McDowell. “Not everybody makes it to victory lane and for 14 years I didn’t, so just to be here now is just so amazing.”

Elliott finished second, and while there was momentarily a question as to who had the win based on when the caution lights came on, the Dawsonville, Georgia racer didn’t have much doubt.

“I don’t think it was very close,” Elliott said. “I kind of got next to him and I saw the lights come on, so I knew it was over right then. Just a huge thanks to NAPA, Chevrolet and everybody at Hendrick Motorsports. I felt like we had a fast car. We weren’t as good as I thought we were on Thursday. I felt like we did a really good job executing today. Staying out of trouble – that’s not something I’ve done a very good job of here in this race, so I’m glad we could at least finish this one and have something to build on for when we come back and try to do better.”

Austin Dillon followed in third, with Kevin Harvick in fourth and Hamlin in fifth.