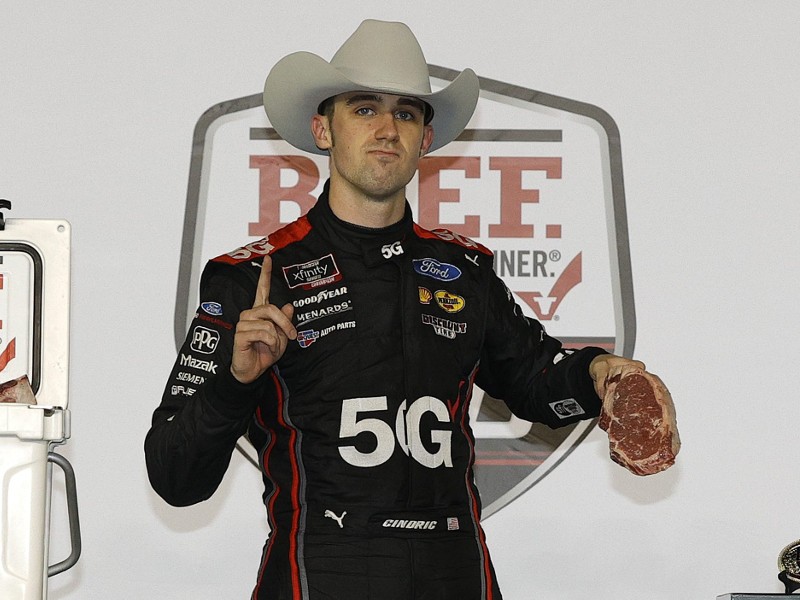 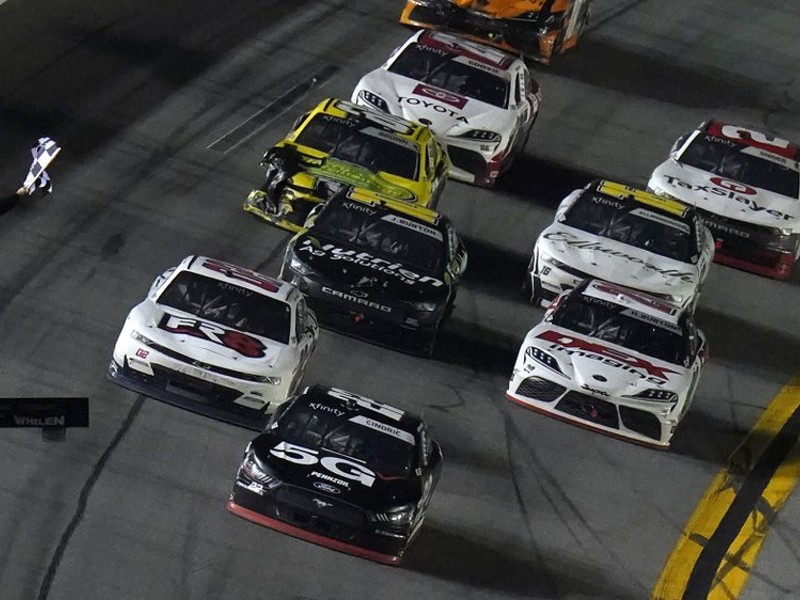 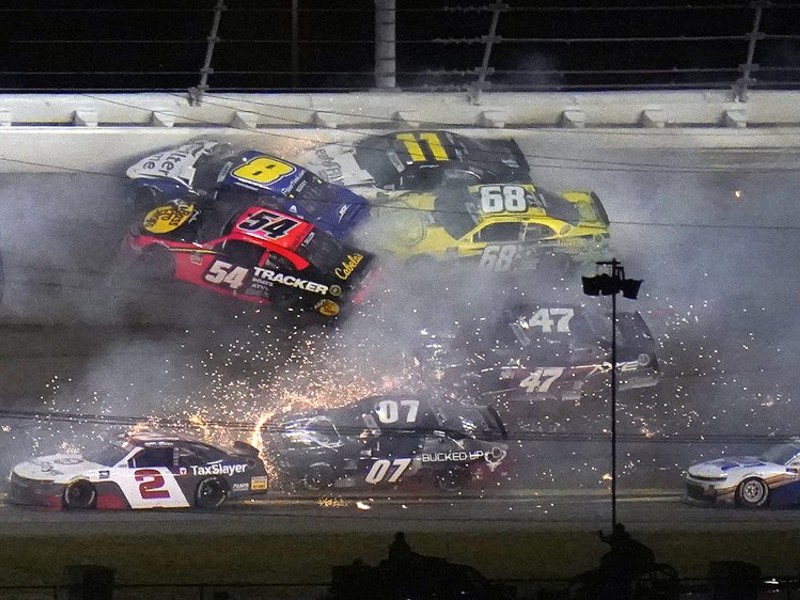 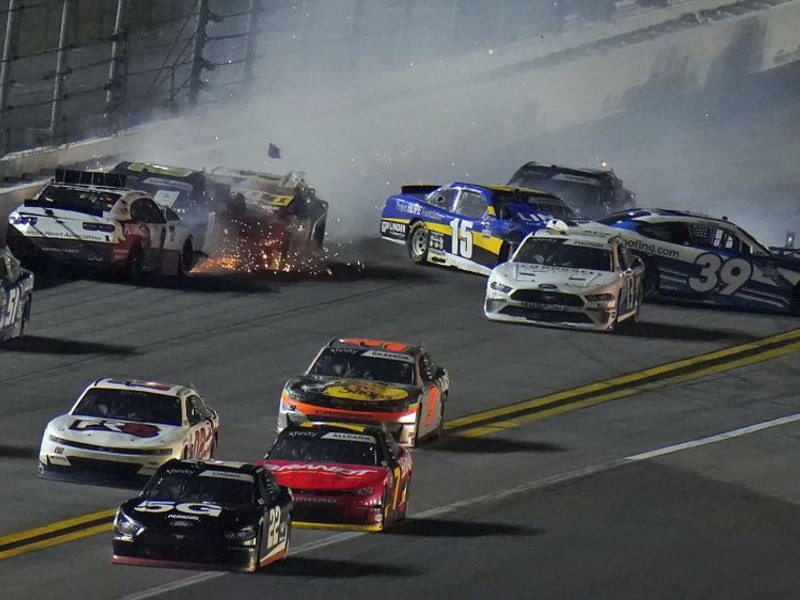 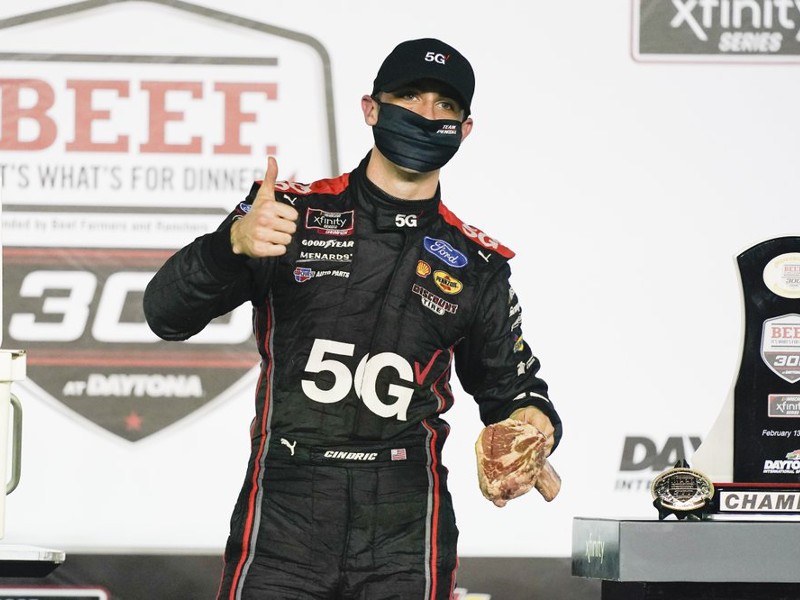 Austin Cindric made the most of the final restart in overtime in Saturday’s NASCAR Xfinity Series season opener at Daytona International Speedway.

Cindric got a huge shove on the restart from A.J. Allmendinger, pushing him in front of Harrison Burton for the lead.

From there, Cindric blocked each attempt to get past him to get to the checkered flag first to score his first career win at Daytona.

“What an awesome race,” said Cindric. “What a really fast Verizon 5G Ford Mustang. Unbelievable effort by everyone at Team Penske. Obviously, coming off a lot of momentum winning that championship last year, but nothing is guaranteed and keep working hard.”

“It feels great,” Cindric said. “Our guys have delivered on bringing us extremely fast race cars. Forget who hasn’t been able to do it, we’ve got some amazing drivers in our camp and right place at the right time and able to get this Verizon 5G Ford Mustang in victory lane on the biggest stage in NASCAR.”

Cindric started the day on the pole after qualifying was washed out, with NASCAR officials setting the field by the 2020 owner points standings.

He put his No. 22 Ford out front early on, trading the point with Justin Allgaier and Riley Herbst. After losing the top spot to Herbst, Cindric settled in, running in and around the top five through the first two segments of the race.

Cindric would lead again early on in the final segment of the race, but following a pit stop on lap 74, he would run back in the top 10 while other fought for the lead up front.

With 16 laps to go, Cindric began working to pull a pack of cars forward on the outside line. He just missed getting caught up in a multi-car crash with 15 laps to go when s Ty Dillon spun in front of his Joe Gibbs Racing teammate Daniel Hemric, setting off a 10 car pile up. Among those gathered up were Jeb Burton, Allgaier, Herbst, Josh Berry, Chad Finchum, Jeremy Clements, Justin Haley and Brandon Brown.

Back under green, Cindric and Harrison Burton began battling for the top spot. The fight was broken up when the final caution of the night flew on lap 114 when the car of Landon Cassill was turned into the outside wall off turn four, with Clements and Tommy Jo Martins getting gathered up as well.

That set up the overtime restart, with Cindric getting the lead and holding on for the win.

“The thing that’s really cool about winning tonight is that I’ve won on the road course here. I’ve won on the superspeedway, and I won the rallycross race they had here, so anything with four wheels, man, Daytona I guess is a decent place,” Cindric said.

Cindric will now turn his attention to Sunday’s Daytona 500, where he will make his first career NASCAR Cup Series start, rolling off from the 39th starting spot.

Behind Cindric, Brett Moffitt pushed his way to second and tried to mount a charge coming to the finish line, but had to settle for a second place result.

Harrison Burton finished in third, with his cousin, Jeb Burton, in fourth and Allmendinger in fifth.

The race was slowed by cautions 9 times for 43 laps. It was also stopped under the red flag to allow for clean up following a multi-car crash at the end of the second segment on lap 60.

The crash occurred as the field raced to the finish line when segment one winner Brandon Jones spun after being clipped by another car. His car was hit by Cody Ware, with Alex Labbe being caught up in it as well. With the tri-oval littered with debris, race officials stopped the field on the backstretch while crews worked to clean up the scene.

The other big crash of the night occurred on lap 74, when the field stacked up as the leaders were coming to pit road. Michael Annett’s car was tagged from behind, sending him spinning back up the track in front of Jeffery Earnhardt and Gray Gaulding. Others gathered up in the crash included defending race winner Noah Gragson, Ryan Sieg, Ryan Vargas, Bayley Currey, Colby Howard, and Finchum, among others.

By the time the checkered flag flew at the end of the night, only 22 of the 40 cars that started the race were still running. Fortunately, there were no injuries in any of the accidents during the race.