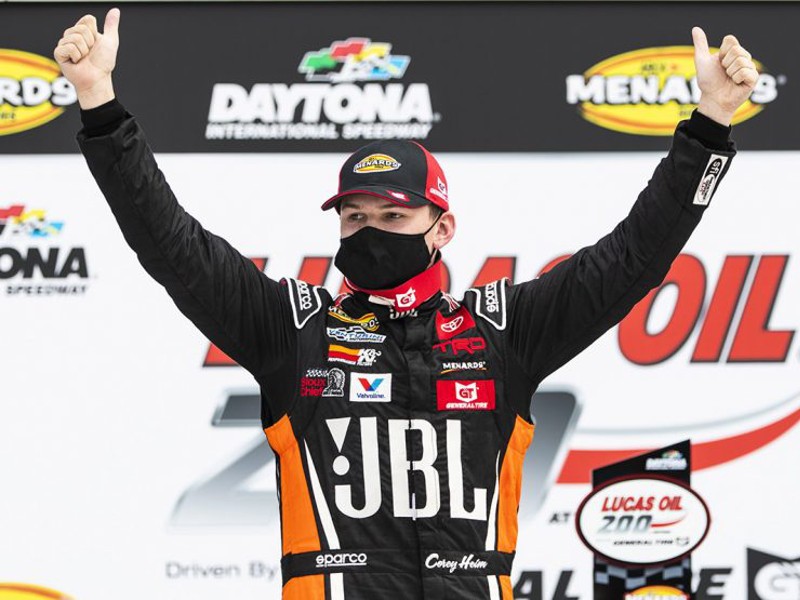 The Marietta, Georgia racer became the second Peach State driver to win in ARCA action at the 2.5-mile superspeedway, as he edged out Venturini Motorsports teammate Drew Dollar – from Atlanta, Georgia – to win the Lucas Oil 200.

In fact, three of the top five finishers hail from the Peach State, as Tucker, Georgia’s Kyle Sieg came home with a fifth place finish.

The 18-year-old Heim joins Watkinsville, Georgia’s John Wes Townley as an ARCA Daytona winner, with Townley winning in 2013 and again in 2016.

Heim, who won last season’s finale at Kansas Speedway to earn his first series victory, picked up right where he left off driving the No. 20 JBL Toyota.

“I gotta give it all to (crew chief) Shannon Rursch,” said Heim of the final restart with one lap to go Saturday. “He made the perfect call, executed this race perfect. He dialed this JBL Camry in perfect.

“Can’t give enough thanks to Toyota Racing, Venturini Motorsports, JBL, all the guys who make it happen.”

A caution with four laps to go set up Saturday’s overtime finish. With Heim, the leader, taking the top lane and Dollar on the bottom, the latter let the former move to the inside so the duo could work together in the draft.

Even with Dollar’s car damaged and lacking power steering, the plan worked to perfection, and VMS ended the race with a 1-2 finish.

“I felt like that was really all we could do there,” Dollar said of the last lap. “We had a super fast Camry today, just didn’t really have what it took to win once we had damage. Had a little bit of a tire rub and just wanted to get to the end. It was tough without any power steering.”

Including last summer’s ARCA Menards Series race at the Daytona International Speedway Road Course, a VMS Toyota has now won five consecutive races on the platform at the World Center of Racing.

“I gotta give a lot of props to Drew Dollar,” Heim added. “He really helped me there at the end, just him being right behind me. I know he’s got a little bit of experience and just raced (Friday night’s NASCAR Camping World) Truck (Series) race, too. Really trusted him, and it paid off.”

Heim and Dollar’s VMS teammates, Derek Griffith and Gracie Trotter, finished 30th and 23rd, respectively, after getting caught up in incidents.

While leading, Griffith was knocked out of the race on lap 27 when Trotter got into his rear bumper.

Trotter found more trouble later in the race when she ran into the back of Chuck Hiers’ car as it slid into the outside wall.

Including the scheduled race break on Lap 43, the race featured four cautions for a total of 31 laps. There were five lead changes among six drivers.

The ARCA Menards Series will return to action on Friday, March 12 at Phoenix Raceway. That race will be a combination event with the ARCA Menards West and will mark the West Series’ season-opener.