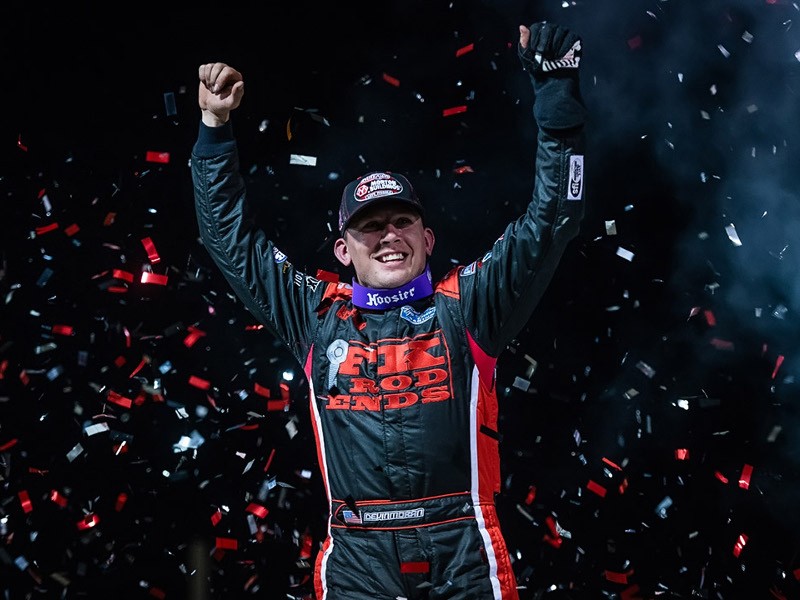 After a rain shower delayed the proceedings, Moran charged to the front, bypassing Chris Madden and Dale McDowell and went on to record his fifth series victory, tying him for 25th on the all-time wins list with his dad, Donnie Moran.

“This is awesome,” Moran said. “We’ve had just a fast race car all week and we haven’t been able to quite get there. I was bummed when I got that pill draw (to start fifth) but congrats to the track crew. They did an awesome job. We got rain and I honestly didn’t think we were going to race. Everyone back there was complaining, not wanting to race, but we’re here to race. So, that’s what we were going to do. They did an awesome job, and this is probably the raciest it’s been all week.

“It’s awesome to finally get a gator (trophy). We didn’t think we were going to come here, but it’s all happening and it’s pretty cool.”

At the start of the 40-lap Feature, on Friday morning, McDowell launched ahead of the field to lead the first lap with Madden following his tire tracks in second. By Lap 3 Madden charged past McDowell off turn 4 to claim the lead. McDowell fought back and the two raced side by side for a lap before Madden got into a rhythm and pulled away.

The second caution of the night came out with 31 laps to go and allowed Moran, in third, to line up next to McDowell on the restart. On the restart, Moran moved to second, and then began his pursuit of the leader.

With 19 laps to go, Moran and Madden began to battle, with Moran coming away with the lead.

From there, the 26-year-old tried to drive away, but soon found himself under pressure from Bobby Pierce over the closing laps. But Moran was up to the challenge, and went on to record the victory.

The World of Outlaws Morton Buildings Late Model Series is back in action on Friday night for round three of four of the DIRTcar Nationals at Volusia Speedway Park. For more information, visit WorldofOutlaws.com.