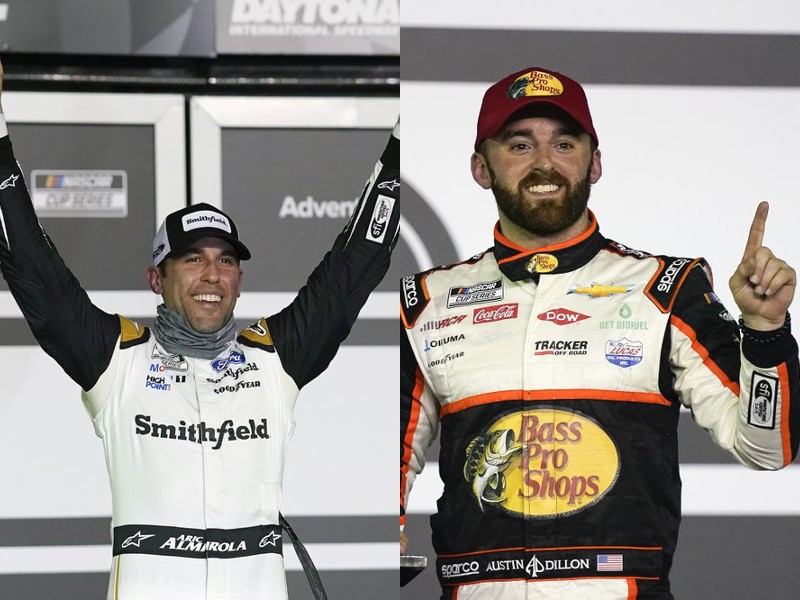 Aric Almirola (left) and Austin Dillon (right) scored the victories in the BlueGreen Vacations Duel races on Thursday night at Daytona International Speedway, which sets the field for Sunday's Daytona 500. Almirola won the first race, while Dillon was the victor in the second. (AP Photos/John Raoux)
Contact Editor

Aric Almirola and Austin Dillon both made trips to victory lane at Daytona International Speedway on Thursday night as the starting field was set for Sunday’s Daytona 500.

Almirola won in the first NASCAR Cup Series Bluegreen Vacations Duel, while Dillon made a last lap pass on Bubba Wallace to win the second.

In the first Duel, Almirola held off a last lap charge from Joey Logano to score the victory.

Almirola took the lead after a set of green flag pit stops, and held the spot the rest of the way to pick up the win and lock into the third place starting spot in Sunday’s running of the “Great American Race”.

The only issue for Almirola came with half a lap to go, when Logano got a run to the inside in turn 3. But when Christopher Bell filed in behind of Almirola, it pushed the No. 10 Ford forward.

Coming to the finish line, Bell looked to the outside of Almirola, but couldn’t make the run as Almirola beat him to the checkered flag in a race that ran flag-to-flag without a caution flag.

“This thing was a hot rod. I’m so proud of these guys on this race team,” Almirola said. “Our race car is so fast. I’m proud of everybody at Stewart-Haas Racing. We’ve got an incredible race car and I can’t wait for the Daytona 500. Thanks to Smithfield and everybody that supports this program. Our Ford Mustang is fast and it’s a great way to kickoff the season.”

For Bell, it was a good start to his Cup Series association with Joe Gibbs Racing.

“It felt really good,” said Bell. “First off, to be here with Joe Gibbs Racing and to be able to represent all of the guys at DEWALT, Pristine Auction, Toyota, Rheem – it’s a dream come true to be where I’m at. That was fun. That was kind of a first for me being able to lead the pack and I’ve got to work on leading lanes and stuff, but we’ve got a really competitive Camry and I’m excited to see what we’ve got on Sunday.”

Ryan Newman finished in third, and Logano in fourth.

Ryan Preece came home in fifth, the highest finishing car not locked in with a team charter. That finishing spot bumped out Ty Dillon, who finished in sixth, but will miss the Daytona 500.

That will also allow Austin Cindric, who finished a lap down in 16th after a pit road speeding penalty, to make the field for Sunday’s race on the merit of his time in Wednesday night’s Daytona 500 qualifying.

Shortly after the end of the first race, a rain shower moved in over the 2.5-mile superspeedway, delaying the start of the second race by almost three hours. But it proved to be well worth the wait.

After the second of two caution flags on the night, the race came down to an overtime finish, with Martin Truex, Jr. holding the point when the white flag flew.

With Austin Dillon challenging on the outside of Truex, Jr., Bubba Wallace dropped to the inside as the field powered into turn 3.

When Wallace moved up to block a run from the outside, Dillon cut left and moved underneath the leader. Wallace tried to counter, but the two made contact, allowing Dillon to get away for the win.

“I was talking to my spotter, Brandon Benesch, about having the No. 4 car behind us on the final restart since he had been pushing well all night,” said Dillon. “I knew he had another Ford behind him though, so it was going to be tough. I made a decent block down the backstretch and got a big push after that. I knew the No. 23 (Wallace) was going to try to block me as we came to the line but I just whipped the wheel, and it all worked out.”

For Wallace, it was a strong run for his new Michael Jordan/Denny Hamlin owned team, but a just miss at a pre-season trip to victory lane.

“A lot of mistakes. A good debut, but nothing to be really happy about for myself,” said Wallace. “It’s okay for drivers to be hard on themselves. That’s how we motivate ourselves to go out and do better. Hats off to my guys – the 23XI team – for building me a great DoorDash Toyota Camry. I tried to do all I could to help (Martin) Truex there, get Toyota a win. I appreciate Kyle (Busch) for cutting me a lot of breaks. I know I’ve got a lot to learn here, but all in all, it was a good night, but I’ve got some learning to do.”

While the first Duel ran caution free, the second saw a pair of multi-car crashes that left several cars wadded up.

The first occurred on lap 35, when the Ford of Chase Briscoe spun off the second turn, gathering up the cars of Garrett Smithley, Grala, Anthony Alfredo and B.J. McCleod as they tried to avoid Briscoe’s spinning car.

The second and last caution came when Smithley tried to make a move to pass Noah Gragson for the final transfer spot. Smithley and Brad Keselowski made contact, triggering a crash that gathered up William Byron and Ross Chastain.

Byron, who had led much of the first portion of the race, was left with a heavily damaged car. His team may have to go to a backup car, which would move him from the second starting position on Sunday to the back of the pack.

David Ragan made the cut to the Daytona 500 with an eighth place finish, while Kaz Grala makes Sunday’s race on his Wednesday qualifying time.