Denny Hamlin has dual role in this year’s Daytona 500 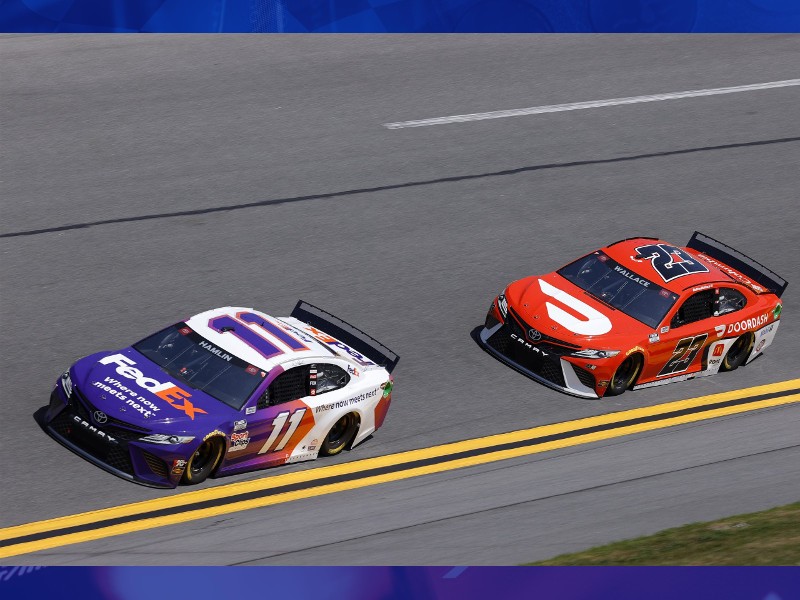 One aspect of the Daytona 500 is old hat to Denny Hamlin — winning it.

But there’s a new aspect to this year’s race, which Hamlin is attempting to win for an unprecedented third straight time. When he takes to the track on Sunday, he’ll do so not only as a competitor, but also as a car owner.

Affiliated with JGR, the organization hired Bubba Wallace to drive the No. 23 Toyota, giving Hamlin two rooting interests in the Great American Race. First and foremost is Hamlin’s own quest for the three-peat at the Birthplace of Speed.

When the green flag waved at Daytona five years ago, Hamlin had no Daytona 500 wins. But after taking the checkered flag in the 2016 race, he followed with consecutive victories in 2019 and 2020. No driver has ever won three straight.

“This is a big opportunity for us and my team and myself personally,” Hamlin said. “It’s just I never would have imagined that we’d be in this position by any means, especially five years ago when we didn’t have any.

“I always think about all the ones that slipped away that I had in control and didn’t make the right decision at the end to finish it off. It would be by far my biggest victory of my career and one that I probably wouldn’t exchange for anything.”

Despite the high profile of 23XI Racing, Hamlin doesn’t think his new status as a car owner will be a distraction.

“For myself, I felt like February 1 was the date where I’m kind of done on the day-to-day for 23XI, and I just think that now my focus is really on the No. 11 FedEx team and how we can win a lot of races and win a championship,” said Hamlin, who posted seven victories and finished fourth in the final standings last year.

“This is where my focus is now. I’ll spend a day or a day and a half during the week that I typically would have off in the middle of the week that will be my time to concentrate on 23XI, but my preparation time, my post-race time will be unchanged here on the driver’s side.”

For the sixth time in the last seven years, a Hendrick Motorsports driver will start on the pole for the Great American Race. Alex Bowman dusted teammate William Byron for the top starting spot in what might be a mixed blessing.

NXS: Austin Cindric Stands Tall As Xfinity Series Champion — But Not Too Tall

Team Penske driver Austin Cindric rode a mid-season surge to the top of the NASCAR Xfinity Series standings last year before claiming the title with a victory in the Championship 4 event in November at Phoenix Raceway.

In the process, Cindric exploded the myth that he’s a one-trick pony who could win only on road courses. On July 9, Cindric started his championship charge with a victory on Kentucky Speedway’s intermediate oval. A day later, he repeated the feat.

On July 18 at Texas Motor Speedway, Cindric won his third straight oval race, definitively putting to rest the notion that tracks without right turns weren’t his cup of tea. And with his championship win at Phoenix — another oval track — he put to rest the canard that, at 6-foot-4, he was too tall to be a successful race car driver.

“I’ve been told I was too tall by a lot of people, and there’s not been a single race car that I haven’t been able to fit in,” said Cindric, who begins defense of his Xfinity Series championship on Saturday at Daytona International Speedway. “Some haven’t been comfortable, some have hurt, some are fine. NASCAR is definitely the roomier of the race cars I’ve driven, so in more ways than one, this is a great home for me.

“But, yeah, the tall thing is a myth as far as I’m concerned. When you’ve got guys like Michael Waltrip squeezing into those twisted-up cars they had back in the 2000s, and guys like (the late) Justin Wilson driving IndyCars, those were my two main points I hit right off the bat when they told me I was too tall. They knew I had at least done some homework.”

Cindric will have additional homework to do this year as he runs selected NASCAR Cup races in preparation for a move to the No. 21 Wood Brothers Racing Ford in 2022. Before then, he’ll try to fend off the usual suspects in the Xfinity Series — Justin Allgaier, Harrison Burton, Justin Haley, Noah Gragson and Riley Herbst, to name a few — as races for another championship before moving on.

For Matt Crafton, the 2021 NASCAR Camping World Truck Series season promises to be more of the same — and simultaneously a season of change.

As Crafton begins his quest for a fourth series championship in Friday night’s NextEra Energy 250 at Daytona International Speedway, he’ll be starting his 21st consecutive full-time season in a NASCAR truck and his 20th with ThorSport Racing.

This year, however, ThorSport is leaving Ford, which carried Crafton to his third series title in 2016, and returning to Toyota. Crafton won back-to-back titles in the No. 88 Toyota in 2013 and 2014.

“I was a very big supporter of going back to Toyota,” said Crafton, who has finished in the top eight in the Truck Series for 14 straight seasons. “The whole Toyota Racing family and TRD and the tools that they give you are unreal.

“That’s why we were as successful as we were in the past, and I think that we can get back to those winning ways and win some more championships. I’m ecstatic about working with them again.”

A fourth title would tie Crafton for the series record with NASCAR Hall of Famer Ron Hornaday, Jr., who won championships in 1996, 1998, 2007 and 2009. But some of Crafton’s stiffest competition may come from his teammates — 2016 series champion Johnny Sauter and Ben Rhodes, who is looking for a breakout season after finishing seventh in last year’s final standings.

The three ThorSport drivers also will have to contend with John Hunter Nemechek, who left his full-time NASCAR Cup Series ride with Front Row Motorsports to run for the Truck Series championship with Kyle Busch Motorsports.