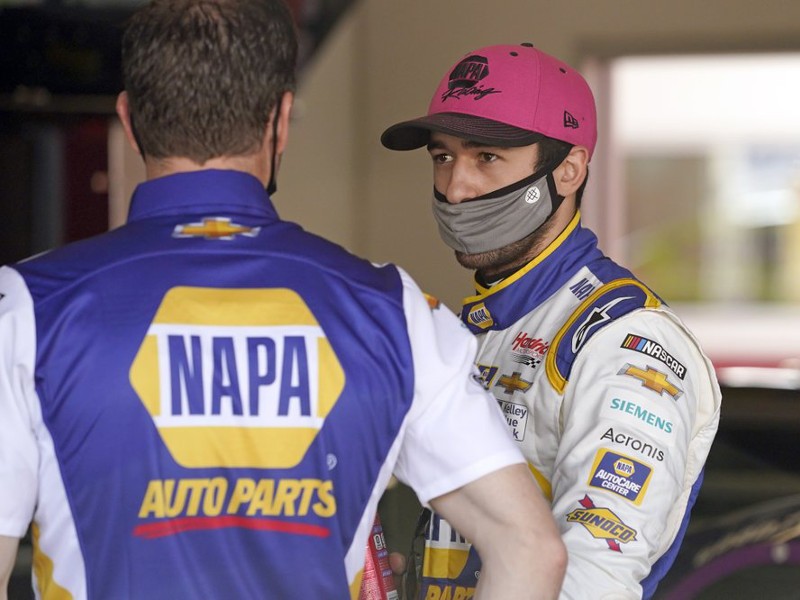 DAYTONA BEACH, Fla. (AP) — NASCAR's newest champion will wreck one of his best friends to win a race. An exhibition race! Nothing but the trophy at stake.

Chase Elliott perhaps offered a sneak preview of what's to come in his title defense when he knocked Ryan Blaney out of his way in the closing stretch of the Busch Clash. The two are tight — they vacation together — and Elliott had little remorse.

“I think you have to try to win the race. I mean, if I’m sorry about trying to win a race, I’m in the wrong business here,” Elliott said after Tuesday night's race on the road course at Daytona International Speedway.

It was an aggression not often shown by Elliott, so mild-mannered that “shucks” and “dang” are about as colorful as he gets. He did flip Kyle Busch a prolonged middle-finger salute after a wreck last May. But Elliott never glanced Joey Logano's way 10 days later when the Penske driver stared him down following their on-track collision.

Elliott was most expressive in the hours after he wrapped up his first Cup Series title last November, when he bounded into the media room at Phoenix, neck gaiter pulled down and drinking a beer. He offered rare introspection on his rise from a quiet kid following his Hall of Fame father around the track all the way to becoming NASCAR's most popular driver and its newest champion.

A little over two months later, Elliott was back to banging his head in yet another overly critical self-assessment at the Rolex 24 endurance race. He said he was “terrible, terrible, way off the pace,” when he climbed from his first stint racing a sports car in his Rolex 24 debut.

He was Eeyore Elliott again, frustrated at not getting the results he demands.

At Daytona nine days later, Elliott was almost defiant following his tangle with his buddy.

Elliott didn't care the 35-laps around Daytona's road course didn't count for anything. He's developed into perhaps NASCAR's best road course driver — he'd won four consecutive races dating to 2019 — and NASCAR is racing the circuit for real later this month. The Daytona 500 is Sunday — Elliott has two poles but no wins in five starts — and winning the Clash could have put him on course to sweep everything in Daytona.

So he dove deep inside of Blaney in the chicane, the two cars made contact and Blaney spun and crashed. Kyle Busch then passed both Elliott and Blaney for the victory.

The two spoke outside Blaney's wrecked car, and Blaney said he told Elliott: “If you’re going to make a move like that, make sure you at least win the race. Don’t hand it to the third-place guy.”

Elliott is 25 and boss Rick Hendrick has known him his whole life. The team owner first signed Elliott to a development deal when Elliott was 14 and a decade later Hendrick sees the same kid. Hendrick said Bill Elliott — former Cup champion and 16-time most popular driver — raised a humble son with an understanding he had to earn his career.

Elliott was required to go to school and maintain his grades. He hated it, he'd rather be racing, but it was non-negotiable. When he wasn't certain he'd have a full-time seat upon graduation, his mother said he'd have to apply to college. Elliott said he was accepted at North Georgia.

“I think Chase has such a sharp head on his shoulders that you don’t have to tell him much," Hendrick said.

That first title finally achieved, Hendrick rewarded Elliott with permission to play around in other series. Elliott drove a late model car in the Snowball Derby, a midget at the Chili Bowl and a Cadillac sports car at the Rolex. Last weekend, as he waited for NASCAR to roll into Daytona, he made his USAC midget debut at Bubba Raceway Park in Ocala.

It was the first time in six seasons Elliott had raced anything outside of NASCAR.

“In the perfect world, I wouldn’t want him to race anything, but it means so much to him," Hendrick said. “I’ve made it pretty plain that I don’t want to see you racing in the weekends and around the events that we have.”

Elliott still lives in hometown of Dawsonville, Georgia and was feted for his championship by the community as he drove his No. 9 Chevrolet through downtown Dawsonville in a parade. He had private celebrations with family and friends — and then he got back to racing.

He wants to be better in different formulas, he's said, and is seeking to improve areas he found weaknesses in last season. Elliott won a career-high five races, including three of the final five and the last two of the season to claim the title.

That breakthrough final push — he'd failed twice prior to advance into the championship final four — set a pace Elliott finds comfortable right now. It was evident in how hard he raced Blaney in a meaningless event.

“There is no defending. We need to be on offense. We need to keep pushing,” Elliott said. “I think if you’re back on your heels and trying to protect something, I don’t think your mind is in the right place.”