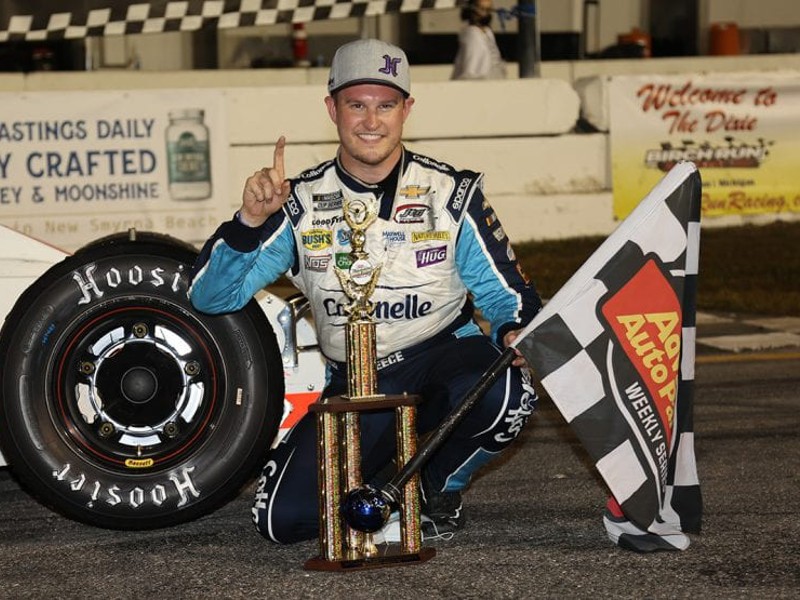 Ryan Preece had a very good day Wednesday in the Sunshine State.

First he locked himself into the 63rd running of the Daytona 500 with a strong qualifying run at Daytona International Speedway in his No. 37 JTG Daugherty Racing Chevrolet. He followed that up by going from last to first to win the John Blewett III Memorial 76 Tour-Type Modified race at Florida’s New Smyrna Speedway.

“I’ve got to thank my team for working here today and getting this thing prepared and just letting me come and drive,” Preece said from victory lane.

Preece was forced to miss qualifying at New Smyrna Speedway due to Daytona 500 qualifying, forcing him to start at the back of the Tour-Type Modified field in his No. 6 machine.

As soon as the race began Preece began picking up spots, racing into the top-20 in short order. By the time a caution flag waved with 24 laps left he’d made his way into the top-10 and was looking for more.

He first had to dispatch Jon McKennedy, who had expressed his displeasure with Preece for an incident a few nights prior during the World Series of Asphalt Stock Car Racing. The two traded blows for a few laps before Preece was able to make his way past McKennedy with 17 laps left.

A caution would wave moments later, setting up another restart. Mayhem started before the field made it to turn one, with Ron Silk and Tommy Catalano coming together on the frontstretch and collecting several other cars in the process.

Preece, somehow, dove to the bottom and missed everything and emerged from turn two in third position behind leaders Eric Goodale and Tyler Rypkema. With 14 to go Preece took advantage of contact between the leaders to slip by Rypkema for second.

That just left Goodale ahead of Preece and in turn three with seven laps left Preece made his move, diving deep into the turn to steal the lead away from Goodale. The caution flag would wave several more times the race was complete, with veteran modified ace Matt Hirschman using the cautions to make a late run at Preece.

Despite one final caution and subsequent restart with two laps left that gave Hirschman a shot at Preece, Hirschman had nothing for the 2013 NASCAR Whelen Modified Tour champion as he held on to top the 76-lap main event.

The win was particularly special for Preece as the event honored late modified driver John Blewett III, who passed away in 2007 following a racing accident.

“I remember the day John died. He was a racer, man. A lot of modified guys are racers, but John Blewett was a racer,” Preece said. “I’ve had a ton of respect for Jimmy Blewett and John Blewett, so to be able to win this race…it’s been awhile since I’ve won here. It’s pretty cool.”

Wait Worth It For Dan Fredrickson

Eighteen years. That’s how long it had been since Minnesota’s Dan Fredrickson last won a race during the World Series of Asphalt Stock Car Racing at New Smyrna Speedway.

“It’s awesome. It’s just great. We’ve been through a lot. We’re a privateer team, just doing this with our money and a couple great sponsors,” Fredrickson said. “It’s just me and a couple of other guys down here.”

Griffith initially appeared on his way to a comfortable victory until the first caution of the 35-lap race waved with 10 laps left. The first attempt at a restart immediately resulted in another caution when Sammy Smith slowed to a stop in turn four.

The second restart attempt was more successful, especially for Fredrickson. Restart on the inside of Griffith, Fredrickson got a great start and was able to ahead of Griffith entering turn three.

Griffith pulled the crossover on Fredrickson and the two raced side-by-side, with the two making contact coming out of turn four with nine laps left. Both cars briefly slid sideways, but Fredrickson and Griffith were both able to recover and continue.

Fredrickson would lead the remainder of the race while Griffith slipped through the field to fourth at the checkered flag.

Other winners on Wednesday evening at the World Series of Asphalt Stock Car Racing included Nick Panitzke in the Pro Late Model class and Ricky Moxley in the Florida Modified division.