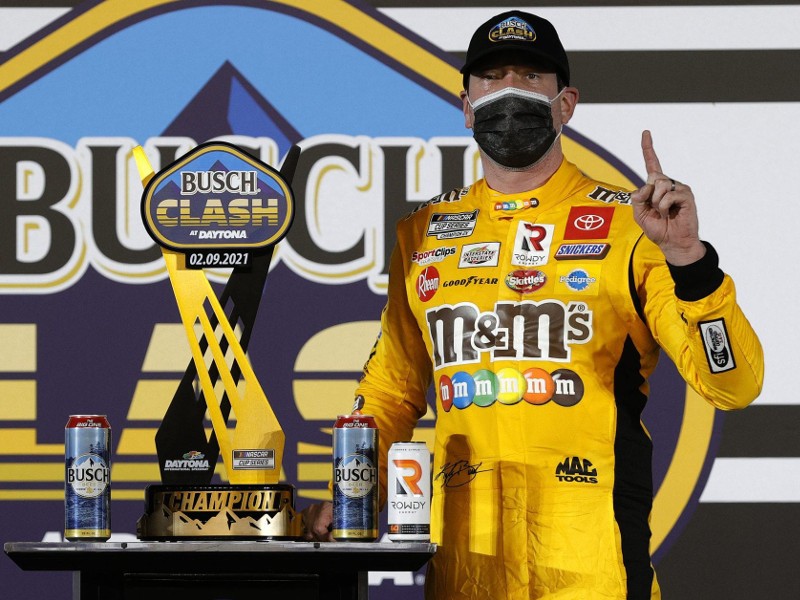 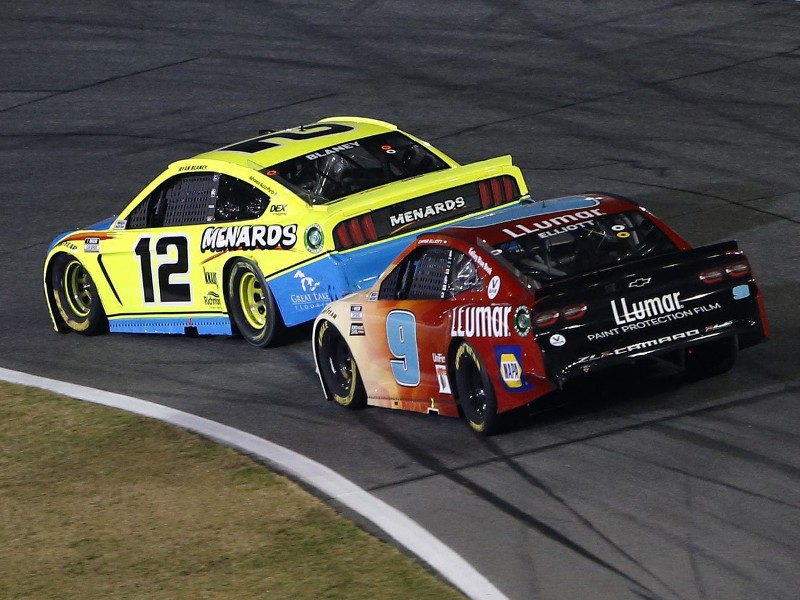 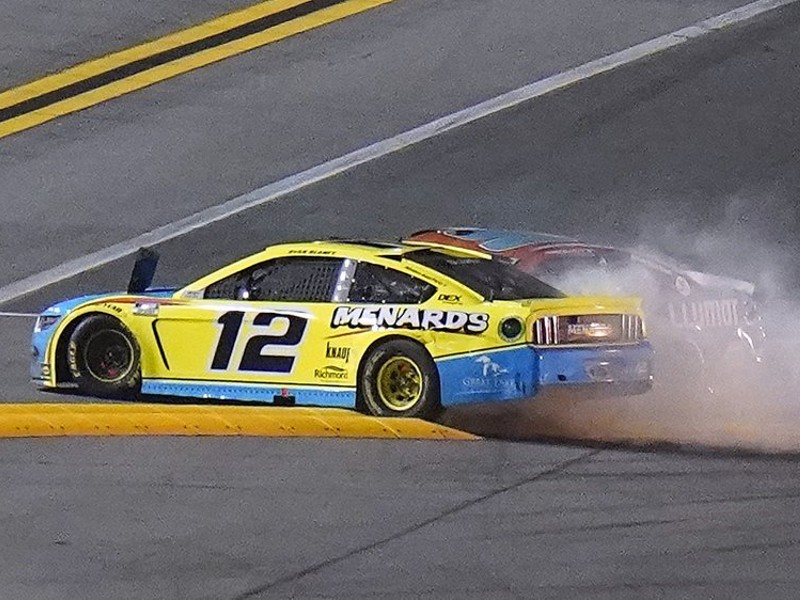 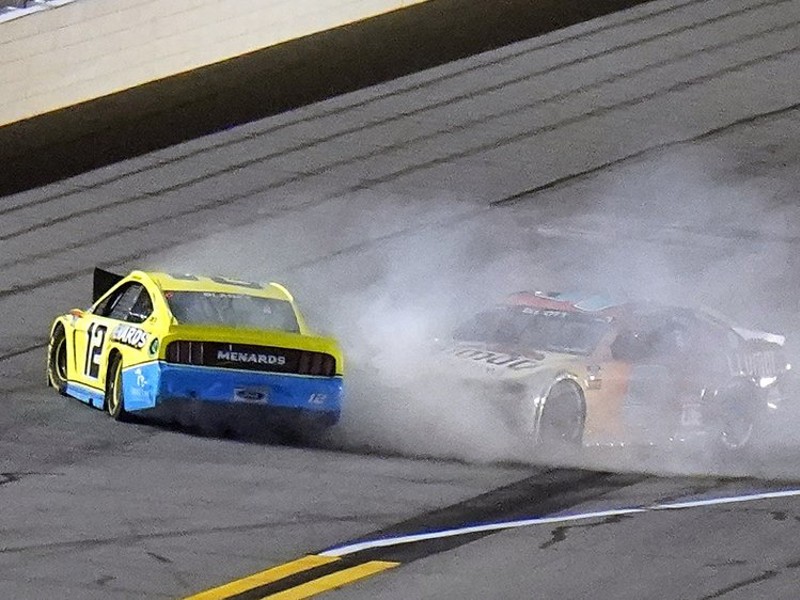 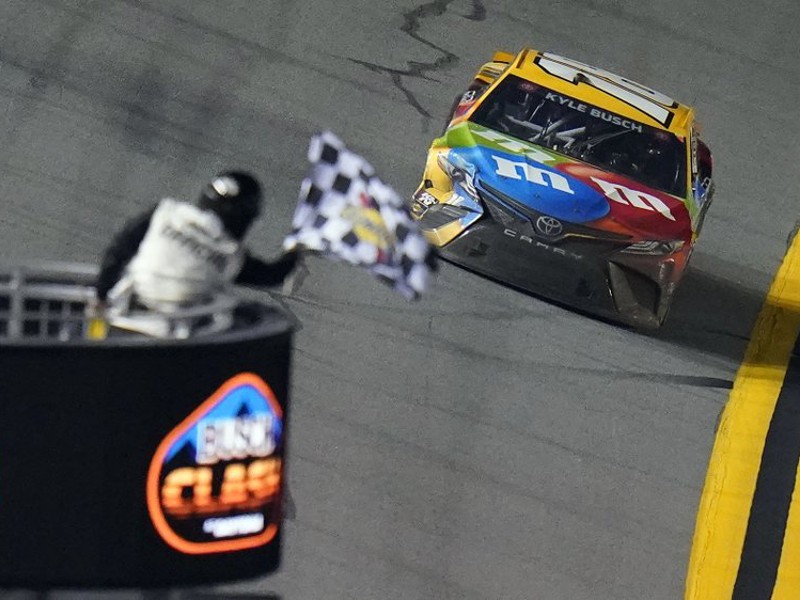 That allowed Busch’s No. 18 M&M’s Toyota to out run Elliott to the checkered flag to steal the win – the second of his career – in the first running of the event on the DIS road course.

It’s the second time Busch has won the non-points paying event with a last lap pass, with the first coming in 2012. It’s also the 10th Busch Clash victory for Joe Gibbs Racing.

“I knew to keep my head down and keep focus ahead and see if I could keep hitting my marks to get close enough to have a shot like that – if something like that were to materialize,” said Busch. “Fortunately it did for us. I can’t say enough about Ben Beshore (crew chief) and this whole M&M’s team – this new M&M’s team. I appreciate what they do for me, everybody at Joe Gibbs Racing, Toyota, TRD.”

Elliott had moved to the point after then leader Martin Truex, Jr. spun exiting the bus stop chicane on the backstretch of the 3.61-mile layout with seven laps to go, bringing out the caution flag. When the other leaders hit pit road, Elliott inherited the lead.

On the restart, Blaney was on the charge, moving up to second with four laps to go. From there, he began stalking the leader. Blaney closed with two laps to go, and with a lap and a half to go, made his move in the kink portion of the infield to take the lead.

But Elliott wasn’t done, as he worked to close on the back bumper of Blaney’s Ford. With half a lap to go, a slip by Blaney in the bus stop allowed Elliott to close.

Coming into the final chicane within sight of the checkered flag, Elliott made his move on the outside of Blaney, and the two made contact, opening the door for Busch to make the move to take the win.

“I didn’t know how it was going to play out or what was going to happen there, but I saw those guys go in there two-wide and I was like, I don’t know if they’re going to come out two-wide,” said Busch. “Certainly, it was a tough battle between those two. They were really good. The 9 (Elliott) was fast, I don’t know if he was the class of the field, but the 12 (Blaney) was definitely just fast and made aggressive moves and was doing a good job all night getting himself back up to the front each time. Those two coulda, shoulda, woulda been the two to race it out for the win and maybe the 19 (Truex, Jr.). Just interesting how that plays out sometimes and what dynamic will push you into victory lane.”

For Elliott and Blaney, who are friends off the track, it seemed to just be a racing incident.

“I was close enough to drive it in there and I feel like I’d be mad at myself for not at least trying,” said Elliott. “Obviously, I don’t mean to wreck anybody, especially him. Some guys I wouldn’t mind. But he’s not one of them. Hopefully he’s not too mad at me. I feel like you’ve got to go for it here in an event like this in any situation. I can’t be sorry about going for the win, but I certainly didn’t mean to wreck him.

“I drove in there and, just that corner gets so tight and I didn’t want to just completely jump the curb to the right. But I feel like I tried to get over there as far as I could. And at that point we were coming together at the same time. I hate it.”

“I hate it happened, too. It didn’t work out for either of us,” said Blaney. “We were just racing hard and I had a little bit fresher tires there. We saved a set and got back to second there and his car was really good. I had to use up a lot to get to him and I kind of tried to protect and I drove into the last corner really deep to try to make sure I didn’t get dive bombed like that, but we just came together there. What are you gonna do?”

In the closing laps, it looked like everything was going Martin Truex, Jr.’s way. He had raced through the field to the lead by the time the race reached a lap 15 competition caution. But he was hit with a penalty for missing the final turn chicane under caution, sending his No. 19 Toyota to the back of the field for the restart.

Truex, Jr. again raced his way through the field, and moved to the point around JGR teammate Denny Hamlin with seven laps to go.

But moments later, Truex, Jr. ran through the dirt and mud on the inside of the exit of the bus stop chicane, sending his car spinning up into the wall.

That ended his night with a 21st place finish.

“I just overshot the bus stop a little bit and hit that mud that was there,” said Truex, Jr. “It was worse than the laps before, so just caught me off guard. I actually slowed down from the lap before going through there and once it got in the bus stop turned back to the right, it was gone.

“It’s been a tough night with that mud there, but I made a big mistake early on and it cost us the lead and we had to come from the back. Honestly, I beat the car to pieces trying to get there. It was fun.”

Meanwhile, another of Truex, Jr’s JGR teammate, Busch, went on to record the victory.

And while Busch was happy to have his second Busch Clash win, his thoughts were already on the big prize at the end of Speedweeks – Sunday’s running of the Daytona 500.

“It’s awesome to start off the year with a win a non-points win, but I would love nothing more than to be right here this Sunday.”

Elliott finished in second, with Joey Logano in third, Tyler Reddick in fourth and William Byron in fifth.