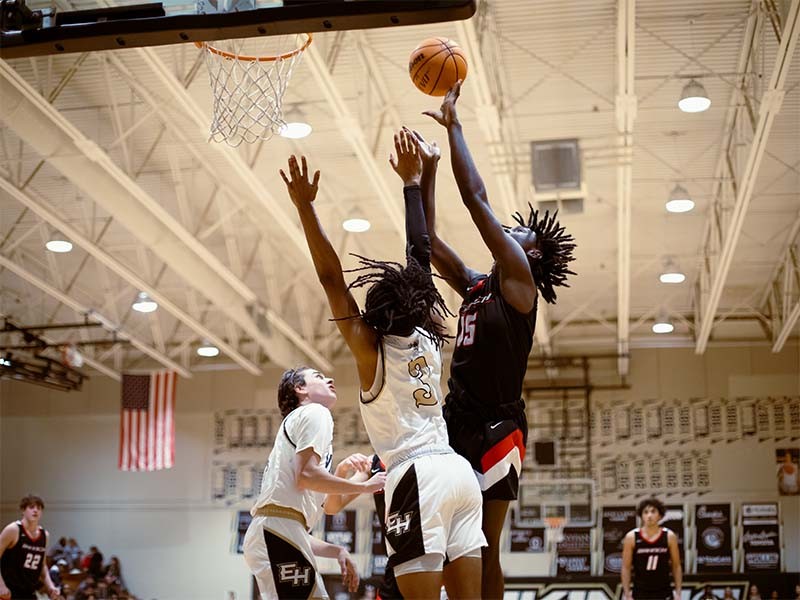 Flowery Branch junior Tyleek Worth shoots over a pair of East Hall defenders. Worth is having a breakout season for the much-improved Falcons. (Photo/Seth Chapman) 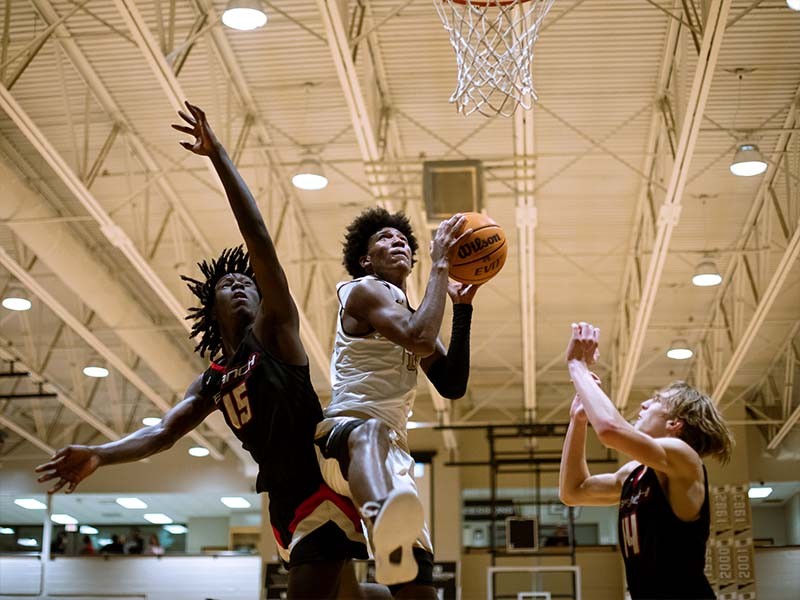 HALL COUNTY — The recent past for both the East Hall and Flowery Branch boys basketball teams have not been anything either program is likely to put into any highlight reels.

The Vikings, once one of the state’s most feared programs, have not made the playoffs since the 2018-19 season and managed just 12 total wins the past two campaigns. The playoff drought is their longest since missing out on the playoffs in the 1991 and 1992 seasons.

From 1993 to 2019, the Vikings made the playoffs 25 of the 26 years with three state titles, three state runner-up finishes, and 10 total semifinal appearances.

The Falcons have not made the playoffs since the 2017-18 season and won just five total games over the past three campaigns.

But as they say, that was then, this is now. And the now, and beyond, looks solar bright for both programs.

East Hall is off to an 8-2 start this season, including a 70-62 win over the Falcons on Tuesday in Region 8-4A play. Branch sits at 7-3 -- already a win total that surpasses the last three seasons combined -- and the loss to East Hall snapped a five-game win streak, the Falcons longest in over six years.

Branch coach Jay Burney, now in his third season, says it’s a welcome change for sure.

“First, I need to give credit to the kids the last two seasons, including the ones who have graduated, because they set the tone for the work ethic that this group now has,” Burney said. “They came in and kept working hard and trying to get better even though they weren’t winning many games. I think that has really carried over this year.

“I think also the fact that the kids now have all been in the program for three years and understand better what we’re trying to do. We’re deeper and more athletic as well.”

For East Hall’s Tommy Yancey, now in his second year at Valhalla, it’s much the same story. He took over a program that was in full disarray. The Vikings went through four coaches in a three-year span, including bringing in Yancey.

The turnaround so far has been remarkable. Yancey attributes it to just one word.

“Trust,” he said. “These guys went through so much in a short period of time it was hard for them to really trust anyone. That was the main thing we worked on last year and over the offseason, just building their trust so that they knew we were with them.

“They're trusting each other now and they’re trusting us as a staff. I think it’s beginning to show on the court.”

The Falcons have a solid core of guys that have been together now since Burney arrived.

Senior guards JP Aguilar and Trey Shaw and junior guards Jackson Owens and Jack Burney give them plenty of quickness to go with the inside presence of junior forward Tyleek Worth.

Owens has been on fire of late averaging more than 20 points/game over the past week while Worth is averaging 17 ppg and 9 rebounds/game for the season. Aguilar, Shaw, and Burney all have had big games.

“A lot of times we go as Tyleek goes,” Burney said. “But JP is smart and does a lot of the little things that help us win. Everyone at some point has stepped up to help us get a win.

“They really compliment each other and now we have 10 or 11 guys that are giving us the opportunity to have competitive practices, which is also making us a better team.”

It’s much the same story for East Hall.

Seniors Clete Cooper (guard) and Christian Torres (wing) have been through the rough times. Both are helping to drive the turnaround along with juniors CJ Agborsangaya (wing) and point guard Levi Holtzclaw.

“The guys before this year didn’t go into games thinking they could win or just hoping they could. This year, with the trust issue much more positive, they are expecting to win games. That is making a world of difference,” Yancey said.

For both Burney and Yancey, just being back in the conversation among the local and area basketball fans is proof enough that things are on the upswing for both programs.

“East Hall had been a state program for decades. We’re being talked about again, which is what we wanted to get back to,” Yancey said. “We have some tough-minded kids. They do not want to go back to the way things were the last few years. I feel we’re turning the corner to get the program back on track.”

“The kids are seeing some success this year and that was the next step for the program,” Burney said. “We still have a lot of things to work on. But the future is very bright for the program I believe.”