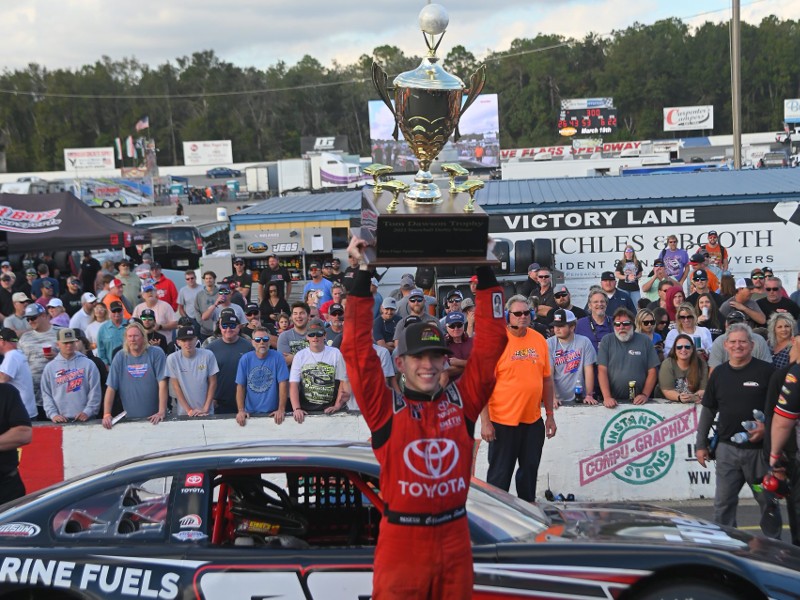 The pass made by the Talking Rock, Georgia racer was one that will be discussed and picked apart in short-track circles for years to come.

“Anybody who’s seen me grow up around here and other racetracks know that I don’t normally do that and that’s not me,” Smith explained his actions on lap 292 of 300. “But Donnie Wilson and Donnie Wilson Motorsports deserve to win the Snowball Derby.

“God has His timing for everything. We’ve had some heartbreak throughout the year, but today was our day.”

Thorn, who sat on the pole for a record third consecutive year, led every lap until Smith moved him coming out of turn 3 following the race’s final restart.

Thorn saw his dream Derby week dashed eight laps from the finish when Smith barged right through him. It’s not often drivers struggle to accept runner-up finishes. Thorn had to swallow his maligned fate for a second year in a row. He also finished second to Ty Majeski in 2020.

“Was that a clean pass?” Thorn asked the crowd when interviewed over the public address system. Jeers and groans cascaded from the grandstands, as fans showed their disapproval in Smith’s move.

“I’ll let them talk for me,” Thorn continued. “I have a few choice words, but that’s not gonna change anything. I thought we won the Snowball Derby. We didn’t. This was an awesome week. I love coming here to race. We’ll try again.”

Canadian Cole Butcher, in another Donnie Wilson Motorsports car, rounded out the podium. It was quite the weekend for Wilson. Snakebitten for so many years as a driver, Wilson had three cars finish in the top-five with Iowan Sammy Smith occupying the fifth position.

“I’m ecstatic,” said Wilson, who wiped away tears after bear-hugging Chandler Smith. “To come out of the Derby finishing in the top-10 is an accomplishment in itself. For us to have the finishes we had is a testament to all the guys that work on these cars and some great drivers.”

Smith pitted in the opening 30 laps because of overheating issues and restarted at the tail end following the last unplanned caution. The race also had three controlled yellows following 75 green-flag laps.

Smith went to work, clicking off spots and found himself back in the top-10 by lap 119. Meanwhile, Thorn was dominant, the class of the field, and easily holding off challenges. NASCAR Cup star Ryan Preece tangled with Thorn, as did Casey Roderick, and the eventual winner. Smith had climbed past everyone except Thorn when the final controlled caution flew with 279 laps completed. Thorn led the field off pit row at lap 287, focused on the final 13 laps and trying to suppress visions of hoisting the big trophy with the softball-sized plastic snowball sitting on top.

It had been a magical week for Thorn and his team. He was perfect coming into Sunday, making history along the way. He became the first driver to win three Derby poles in a row Friday and rewrote more record books when he captured the Allen Turner Snowflake 100 pole Saturday. Thorn went on to win the biggest Pro Late Model race in America and scored a $15,000 payday. He would’ve left Five Flags Speedway with more than $60,000 in total winnings had he come away with the victory.

“It’s heartbreaking,” a visibly frustrated Thorn said. “Everyone on this team who spent their time to come here and work as hard as they did, it’s not fair for those guys.”

Rich Bickle experienced his own brand of heartbreak in the final race of his illustrious 45-year career, struggling to a 31st finish. Choked up in pre-race festivities by a moving tribute from Tim Bryant and the Five Flags family, the five-time Derby champion reflected fondly on his love affair with the sport’s preeminent race.

“Where’d 45 years ago?” Bickle teased. “It has all been pretty special. I’ve been here when it froze, and it’s great to see all these people here today.”

Fourteen states and two countries were represented in the Derby field, which saw 10 rookies make their first career starts. Thorn has now led nearly 660 laps, the most by active drivers, in his nine Derby starts. He has now settled for bridesmaid honors two years in a row.

“Chandler did an excellent job,” Wilson said of his driver. “He stayed cool, calm, and collected. Thorn was the guy to beat all week. Chandler got up on the wheel and got it done.”

And he provided another thrilling Derby finish that will be dissected for decades to come.