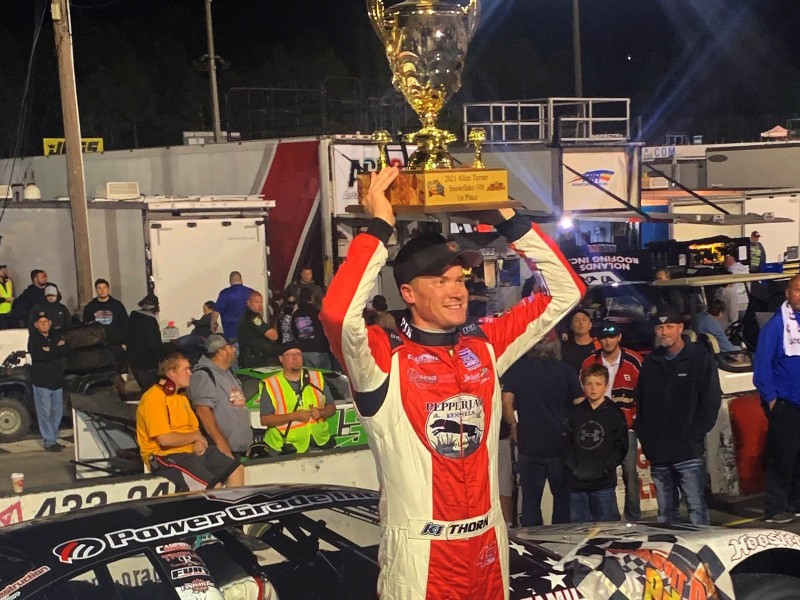 Derek Thorn has been on another planet than everyone else this weekend at the 54th annual Snowball Derby at Five Flags Speedway in Pensacola, Florida.

It’s his second event win in three years. It also marked his second consecutive pole, a feat that hadn’t been accomplished. Thorn achieved the same history in Derby qualifying Friday night by winning the pole in back-to-back years. On Sunday, he looks to become the first driver to sweep the weekend in winning both the Snowflake and the Derby.

“Fifteen years ago, this was a figment of my imagination,” Thorn said. “The car was phenomenal. Every time we come here, we try to get a little better. To have this car tonight, it’s unbelievable.”

He had competition for most of the race from Monroe, Georgia’s Jake Garcia, but the Deep South Cranes Blizzard Series track champion and Southern Super Series champion for Super Late Models settled for second. Colin Allman was steady all night, staying in the top-five, and finishing third.

“We were doing everything we could to stay out front,” Thorn said. “(Garcia) was keeping us honest. Track positioning is big here. And I was doing my best to save tires and keep them in one piece.”

There were six cautions and Thorn was perfect on each one. Each time he approached lapped traffic, Thorn deftly maneuvered through the cars in the back.

Johanna Robbins was enjoying a top-five performance at her home track before Noah Gragson started a chain reaction crash on lap 82 that deposited Robbins into the wall on no fault of her own.

Connor Okrzesik, who already has four Snowball Derby starts in his young career, had prior school commitments that prevented him from appearing in Sunday’s race. The 32-car field in the Faith Chapel Outlaws Snowball Derby wishes Okrzesik stuck with the books Saturday instead of showing up at Five Flags Speedway.

Okrzesik led 47 of the 50 laps and was dominant en route to his first career Derby title.

“We just won the Derby, boys!” Okrzesik wailed. “It kills me we couldn’t run (the Derby), but I wasn’t gonna miss this race.”

Piloting the red George Bragg No. 22 out of Mississippi, the Grand Bay, Alabama native started second. Okrzesik got to the inside of polesitter Bubba Winslow on lap 3 and quickly shot off like a cannon. Timothy Watson challenged Okrzesik on late restarts, but he was up to the task each time and maintained his lead. Watson finished as runner-up, with Outlaws season track champion Jake Finch rounded out the podium.

“Timothy had a really fast car there at the end,” Okrzesik said. “He put a lotta pressure on us.”

Not enough to stop Okrzesik from capturing the checkered flag and celebrating by doing donuts in turn 1. Or, at least, trying to do donuts.

“I’m not good at donuts. I guess I don’t win that much,” Okrzesik said.