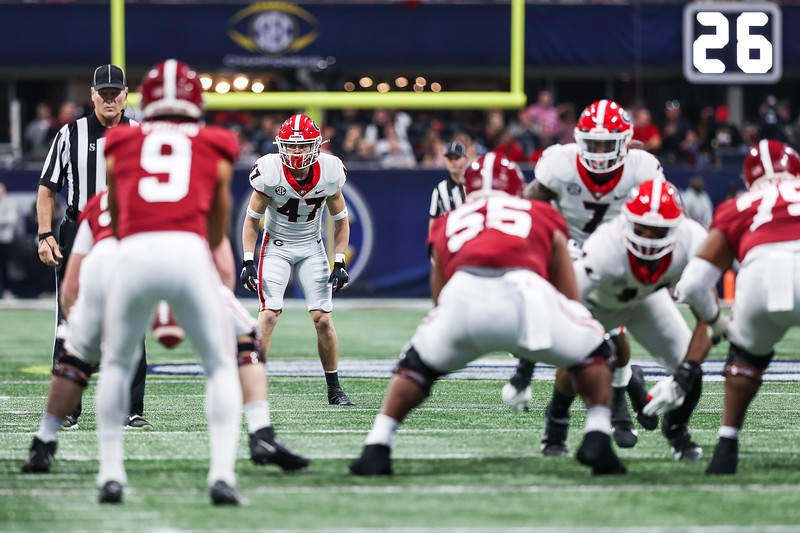 North Hall's Dan Jackson has 32 total tackles on the season for the Bulldogs. He had two tackles against Alabama in the 2021 SEC Championship at Mercedes-Benz Stadium in Atlanta on Saturday.
Photo/Mackenzie Miles
Contact Editor

Dan Jackson's rise to becoming a key part of Georgia's 2021 defense may have come to a surprise to many around the country.

After all, who would expect a walk-on to crack the starting lineup on a roster so loaded with four and five-star rated talent? The Gainesville native said he never let doubt or expectation affect his path to the field.

"If you want to do something, go do it and don't listen to all the outside noise," Jackson said after Georgia's loss Saturday to Alabama in the SEC Championship Game in Atlanta. "Just keep faith."

Football fans from Northeast Georgia will likely remember Jackson as a force in his high school years at North Hall. As a senior in 2018, Jackson led the Trojans on both sides of the ball with more than 1,700 total yards, 26 total touchdowns and led the team in tackles.

While his high school days were more highlighted by his offense, he's found his place at Georgia in the defensive secondary. After rotating in and out of the lineup throughout the season, Jackson trotted onto the field at safety for the Bulldogs' first defensive snap Saturday evening. In all he has made four starts this season for what had been, up until Saturday, the top-ranked defense in the country.

Jackson said getting to compete with the talent Georgia has on both sides of the ball has been a special experience.

"Honestly, it's a blessing. I get to go against the best people every day at practice, so that prepares me for all the competition we've had this year," Jackson said. "I'm enjoying it where I'm at now. I'm ready. I can play with anybody."

Jackson has 35 tackles so far this season and also made one of the highlight plays of the season to date when he blocked a punt against then-number-eight Arkansas to send an already raucous Sanford Stadium crowd into an absolute frenzy en route to a 37-0 win.

Jackson said the team will now need to re-focus after Saturday's loss to Alabama.

"We didn't execute like we should have. A lot of things went wrong for us and they played a great game," Jackson said. "You've just got to use it as fuel. It's a wake-up call. I guess we needed it and we're not going to go home and pout about it. It's over now, we're going to let it go and move on."

Still, Jackson does not take the experience for granted. He called the season a blessing and offered advice for any high school athletes who may be in the same situation he was.

Jackson received only one FBS-level scholarship offer after his senior year: Air Force.

"Just believe," Jackson said. "Don't listen to all the outside noise. Just listen to your friends and your family. It just takes hard work, that's it."