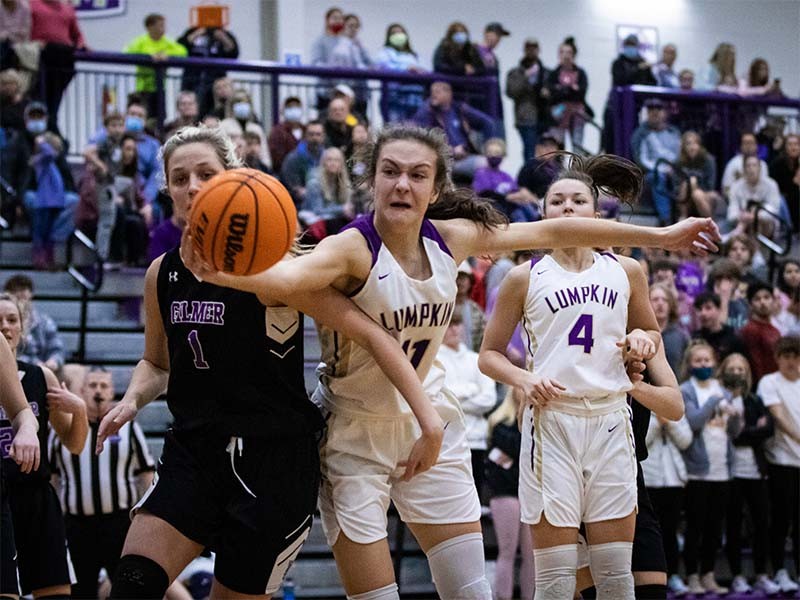 Mary Mullinax (11) had 16 points and 6 steals and Averie Jones (4) had 10 second-half points to help lead No. 1 Lumpkin County to a 52-31 win over Flowery Branch on Thursday night in the Lady Indians' season-opener.
FILE -- Photo/Seth Chapman
Contact Editor

DAHLONEGA — It’s been eight months since the Lumpkin County girls walked off the court after a heartbreaking last-second semifinal loss to Cross Creek in the Class 3A playoffs.

Despite a shaky first half against Flowery Branch in their season-opener Thursday night, there did not seem to be any lingering effects. The Class 3A No. 1-ranked Lady Indians used a 13-1 third quarter run to blow open a close game en route to an impressive 52-31 win over the Class 4A Lady Falcons.

Lumpkin County (1-0) forced 19 Flowery Branch turnovers, converting those into 15 points for the game. After 10 first half miscues of their own, the Lady Indians had just 6 in the second half.

For the first time since end of the 2019-20 season, they also had senior Kate Jackson back and she looked more than ready to put last year’s lost season to injury behind her. Jackson poured in a game-high 17 points to go with 7 rebounds, mostly coming on stick-back baskets.

“Kate looked great to me out there,” Dowse said. “It was good see her go out there and play like we know she can. She was aggressive and playing with power going to basket.”

The Lady Indians were expected to have a different look this season. Jackson’s presence helped offset the graduation losses of Isabel Davenport and Mackenzie Caldwell. Mary Mullinax and Lexi Pierce also made their presence felt on the defensive end.

The Lady Indians jumped on Flowery Branch early forcing three quick turnovers while running out to an 8-0 lead in the first three minutes. Mullinax had two steals, 4 points, and an assist for Lumpkin County in the spurt. The Lady Falcons had more turnovers (3) than shots (0) in that same span.

But Shaina Kriews finally got Branch on the board with a free throw and Amyia Scott ended the field goal drought for the Lady Falcons to pull them within 8-3 late in the first quarter. Bella Brick then started and ended a 10-2 Branch run with 3-pointers to give Branch its first lead at 13-12 moments into the second quarter.

After the teams traded turnovers, Jackson converted her third offensive rebound into points and Mullinax had another steal and layup to reclaim the lead for Lumpkin County, 16-13.

Kriews later hit 3-of-4 free throws for the Lady Falcons to tie the game at 16. Jackson converted another stick-back with 19 seconds left for a 19-18 halftime lead for Lumpkin County and Branch never led again.

Both defenses were tough in the first half, forcing 19 combined turnovers. But Lumpkin County was 0-for-10 from 3-point range in the first half to keep the Lady Falcons within striking distance.

Lumpkin County took control in the thid quarter. Two free throws by Kriews and one by Brick got Branch within 23-21 with 3:44 left in the period. But Pierce finally ended the Lady Indians’ 3-point drought and Mullinax hit one with 11 seconds left in the quarter to quickly build a 31-21 lead.

Dowse said they never panicked despite the early shooting woes.

“We got a lot of good looks in the first half, they just didn’t fall,” he said. “We told them to just keep shooting quality shots and eventually they would go in. The girls really executed well in the second half.

“Flowery Branch is always a quality team so that’s a good win for us to start off the season. (Flowery Branch coach) Courtney (Newton) always does a great job with her team. They’re going to be tough for most teams.”

Mullinax finished with 16 points and 6 steals and Jones had 10 points, all coming in the second half for Lumpkin County. Pierce had 7 points and 5 steals for the Lady Indians.

Kriews led Flowery Branch (2-1) with 13 points, but just two after halftime. Brick finished with 11 points for the Lady Falcons.

The Falcons improved to 2-1 on the young season with a road win on Thursday.

Flowery Branch never trailed getting a Jackson Owens 3-pointer to open the game and quickly running out to leads of 8-4 and then 13-6 early in the first quarter. Another Owens trey late in the period pushed them a 21-12 advantage after the the opening frame.

The Falcons kept the pressure on scoring five points in the final 8 seconds to run their lead to 30-17 by halftime.

Lumpkin County (0-1) struggled early on in its season-opener missing nine free throws in the first half and half-a-dozen shots in the paint as well.

Branch took a 45-32 lead into the fourth quarter and was able to hold off a late Lumpkin County rally.

Fe'uan Honors poured in 14 points to lead four players in double-figures for Flowery Branch. Jack Burney had 12 points and Trey Shaw and Tyleek Worth had 10 points each for the Falcons.