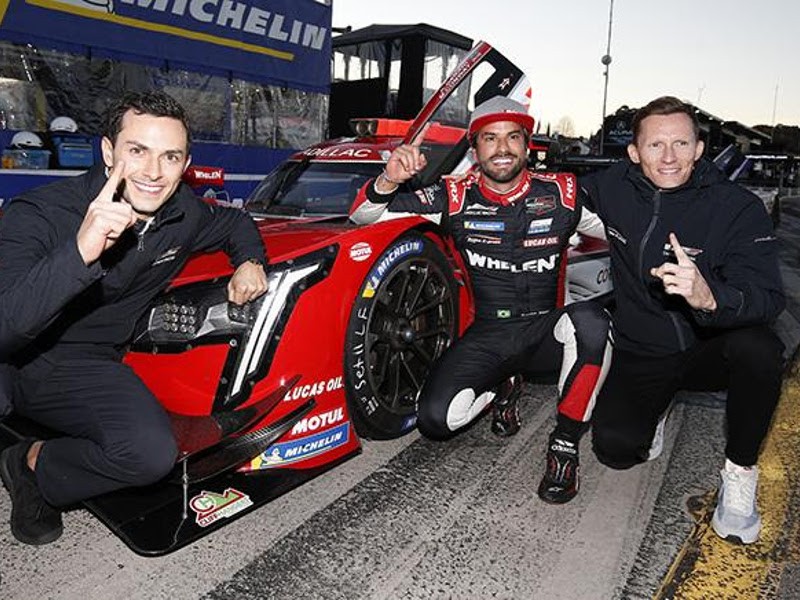 In his last qualifying attempt with Action Express Racing, Felipe Nasr was at his best.

Winning the Motul Pole Award was emotional for Nasr, who will leave Action Express after the race. The team announced last month that Nasr will be replaced next season by Tristan Nunez in the No. 31 Whelen Engineering Racing Cadillac DPi-V.R.

During a post-qualifying interview, Nasr fought to control his emotions.

“I promised myself that I wouldn’t let the emotions come until after the checkered flag drops (Saturday),” Nasr said. “That shows how much respect and love I have for the team. They took me in as family when I joined halfway through 2017. They’re just a big family to me. … This is something that will always remain. It will be sad to leave them.”

“There is so much on the line and you just want to deliver,” Nasr said. “I had a lot of fun. Wow! It’s a great car to drive. … It was all about getting the tires correctly in the window and bringing them up and just nailing those laps.”

The 35-point reward for winning the Motul Pole Award is significant in the team’s battle for the championships in the Daytona Prototype international (DPi) class. Nasr and Derani are now 11 points closer to catching points leaders Ricky Taylor and Filipe Albuquerque from the No. 10 Konica Minolta Acura ARX-05 in Saturday’s 10-hour season finale.

The gain from winning the pole put Nasr and Derani within eight points of Taylor and Albuquerque for the drivers’ championship. Whichever car finishes higher – the No. 31 or the No. 10 – takes home the crown. Nasr said he was confident beforehand that he had a shot at the pole.

“I knew it was going to be close, but you never know until it’s time, right?” Nasr said. “I was pretty happy with the way we worked with the car yesterday through all the sessions. We adapted to the weather conditions, as well. … Getting the right adjustments to the car was key.”

The No. 55 of Tincknell, Oliver Jarvis and Jonathan Bomarito will start ahead of the No. 5 Mustang Sampling/JDC-Miller MotorSports Cadillac shared by Sebastien Bourdais, Loic Duval and Tristan Vautier.

Mike Conway will join Nasr and Derani in the No. 31 car, while Alexander Rossi will join Taylor and Albuquerque in the No. 10.

Ben Keating grabbed the Le Mans Prototype 2 (LMP2) pole in the No. 52 PR1 Mathiasen Motorsports ORECA LMP2 07 but not without an adventure. The Texan’s best lap of 1:12.229 (126.597 mph) outpaced Steven Thomas in the No. 11 WIN Autosport ORECA by 0.354 seconds with Dwight Merriman slotting into third on the LMP2 grid in the No. 18 Era Motorsport entry.

The was Keating’s seventh career pole, despite sliding off course early in the 15-minute session in turn 3.

“That was an exciting qualifying session,” said Keating. “The sun was right in my eyes and I had no idea when to turn in to the corner. I guessed a little too early and hit the curb, launched into the grass, collected a (trackside) sign, downshifted and got going again. The good thing is I landed in that nice soft, red Georgia clay, so nothing got flat-spotted. The car didn’t look too good – it was pretty dirty – but it felt fine.”

Fine enough for Keating to set three consecutive fastest laps in the waning minutes of the session.

“Each time I thought I’d done my best, and the team told me on the radio that the guys behind were doing better,” he said. “It was a fun challenge to find those extra tenths of a second every lap. I’m confident I’ve never gone through Turn 1 faster than I did on the last lap. That was an adrenaline rush.”

Keating needs only to start Saturday’s race to get another rush, namely securing LMP2 team title for PR1 Mathiasen and the driver title for himself and season-long co-driver Mikkel Jensen.

“It’s a luxury knowing we only have to take the green flag to win the championship,” Keating said. “Obviously, you have to finish in order to win the race, but it’s not like we have to run super safe. Our first goal is to be in first place at the four-hour mark to secure the Michelin Endurance Cup points, then we can really fight for the win in the final six hours.”

Kruetten made the most of limited track time following an early red flag in the session to turn a lap of 1:15.664 seconds (120.849 mph) to score his first pole.

“This place by far is my favorite track,” said Kruetten, who will share the No. 2 LMP3 with Tom Gable and Andrew Meyrick in Saturday’s race. “Pole position is only a small job for a 10-hour race. We have a strong lineup. If we can keep out of trouble, we’ll be good.”

Kruetten’s feat was more impressive since this is his first visit to Michelin Raceway Road Atlanta and the team didn’t test leading up to race weekend.

“We came here without doing any testing and didn’t expect much from it,” he said. “The team gave me a mega-car and we got the lap in and it was enough for pole.”

The points leader, Gar Robinson, who drives the No. 74 Riley Motorsports Ligier, will start fifth in the 10-car LMP3 field. The No. 54 CORE autosport Ligier did not make a qualifying lap due to what the team described as a “fuel cell issue.”

Jonathan Bennett and Colin Braun, who will drive the car Saturday with George Kurtz, are unofficially 54 points off Robinson’s lead.

Krohn drove the No. 24 BMW Team RLL to the GT Le Mans (GTLM) class pole position for the 10-hour endurance race that wraps up the 2021 IMSA WeatherTech SportsCar Championship. And he did it with style.

The 31-year-old Finn was in a class by himself in GTLM qualifying, turning a lap timed at 1 minute, 15.226 seconds (121.553 mph), more than half a second up on Matt Campbell in the No. 79 WeatherTech Racing Porsche 911 RSR-19. Krohn and his team were so confident the time would stand up that they parked the BMW with several minutes remaining in the 15-minute session.

“I knew it was going to be the last qualifying with this car, and this beast with low fuel and new tires is just a pleasure to drive,” Krohn said. “I was trying to enjoy every moment, and I went out there just thinking, ‘Just have fun and see where we end up.’

Krohn believes the cool conditions forecast for the race could benefit the BMWs, which are the largest and heaviest cars in GTLM class. BMW is seeking its 13th GTLM class win since the class was introduced in 2014.

“Obviously qualifying doesn’t mean the most for a 10-hour race, but we’re still happy to be here and we think we have a good race car,” he said. “We hope it’s going to be just as quick, but obviously it’s a long race and there are more cars here than probably ever. It’s going to be about keeping out of trouble.

“The cool weather helps on tire deg(radation), and it helps the balance,” he added. “I think it’s a good weekend to go racing.”

Antonio Garcia drove the No. 3 Corvette Racing C8.R to third on the GTLM grid with a 1:15.930 lap. Joined this weekend by Nicky Catsburg, Garcia and his full-season Corvette teammate Jordan Taylor will clinch the GTLM championship by simply starting Saturday’s race.

The second WeatherTech Racing Porsche, the No. 97, in the hands of Fred Makowiecki qualified fourth, followed by Nick Tandy in the No. 4 Corvette. The No. 25 BMW suffered a mechanical problem and did not post a time.

Zacharie Robichon qualified the No. 9 Porsche eighth in the GTD session to determine the grid order, but the car moved up a spot when the No. 14 Vasser Sullivan Lexus RC F GT3 didn’t meet minimum ride height in post-qualifying technical inspection and was moved to the back of the GTD grid.

“I think (the starting position) makes us very happy going into the race, but being such a long race, if I could have got third or fourth or fifth in qualifying, I would have said it doesn’t make a difference,” Snow said. “We’re going into a 10-hour race, it’s going to be a long race. But we definitely have a good car and that’s what it shows. A comfortable car.

“I just go out there and have fun,” Snow added. “You look at the points and everything and, I mean, you always want to do the best that you can so we always want to go out and win the race. So, we’ll do what we can and try to finish ahead of the (No.) 9 car.”

With slightly different race conditions expected for Saturday – highs are forecast in the low 50s compared to Friday’s high 60s – Snow said he was encouraged by not only the qualifying sessions but also practice on Thursday. It’s Snow’s sixth career pole position and third of the season.

“Tomorrow’s going to be quite a bit different with the temperatures being a lot lower, but we have a good car, we have a comfortable car for the race, so looking forward to that,’’ Snow added. “You always feel good when you’re qualifying up in the front, so should make for a good fun race.’’