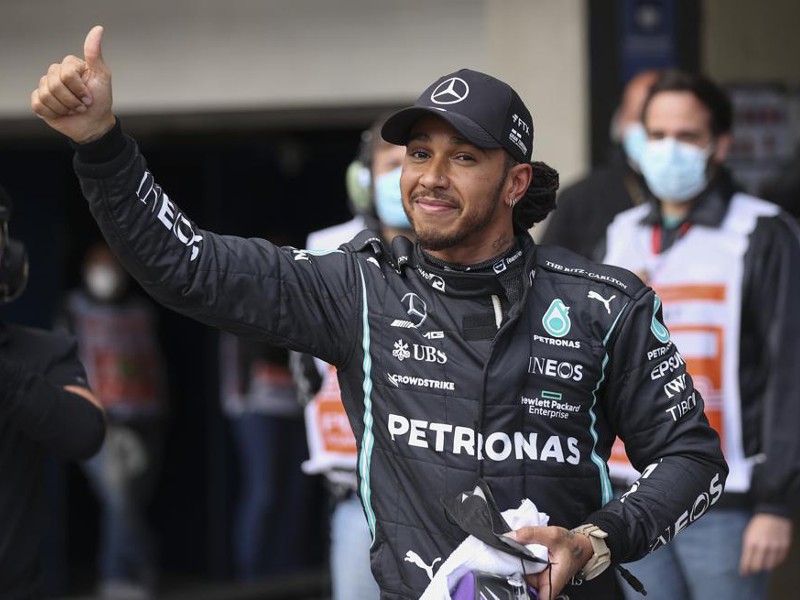 Hamilton was more than 0.4 seconds ahead of his Red Bull rival in Friday's qualifying at Interlagos, having also set the fastest time in the morning's practice session. That means he'll start first in the sprint race on Saturday, which will determine the starting grid for Sunday's Grand Prix.

However, the decision by Mercedes to change the engine of his car means the British driver will not start higher than sixth in Sunday’s race, even if he wins the sprint.

“Today was a really good qualifying session, I’m super happy with it,” Hamilton said. “We’ve got the penalty but we’ll give it everything we’ve got. It’s not easy to follow, but I guess Max is starting on pole (Sunday) now so it’s going to be very hard to catch him but I’ll do my best to try and go through the field."

The seven-time F1 champion trails Verstappen by 19 points in the standings with four races left in the season.

It’s the second time the Mercedes driver has exceeded the limit of three engines for the season, and the penalty will make it even harder to close the gap to Verstappen.

Hamilton could face another penalty as well, as organizers said stewards were investigating whether the DRS system on his car had violated regulations during qualifying. They said a decision will be announced Saturday morning.

Mercedes' Valtteri Bottas finished third in qualifying, 0.014 ahead of Red Bull's Sergio Perez, who was faster than him in the practice session a few hours earler.

The Red Bulls had proven faster than the Mercedes cars in recent races but Verstappen said Hamilton's performance on Friday was “not a big shock” after the engine change.

“I am just happy to be second. That is a good position to start from," he said. "You always want to be closer, but sometimes you just have to be realistic.”

Hamilton took a 10-place grid penalty for a new engine in Turkey. Bottas has faced similar problems, which has raised questions about the engine's reliability.

Mercedes team principal Toto Wolff said Hamilton's engine was replaced because of degradation, adding it's an issue that “is going to continue until the end of the season.”

“We haven't yet realized why that is, but we are just seeing it creep down,” Wolff said.

The Brazilian GP will be the third event of the season with a qualifying sprint race on Saturday to determine Sunday’s grid. The two previous sprint races were held in Silverstone and Monza.

The weather could still play a role at Interlagos, with a thin drizzle falling in certain sectors of the track on Friday, but not enough to impact drivers' performances.

Rain certainly won't affect the mood in the stands at Interlagos either, with the croud loudly cheering on the drivers during Friday's sessions. A total of 170,000 fans are expected during the three days of racing after last year's grand prix was canceled because of the pandemic. Health restrictions at sporting events in Brazil were removed on Nov. 1.

Brazil has reported more than 610,000 deaths from the coronavirus, but the rate has sharply decreased around the country.

Eugenio Silvano, 54, came from the capital Brasil to enjoy all three days at Interlagos. Wearing a shirt that read “Ayrton Senna forever” in Portuguese and a mask in Brazil's yellow and green colors, he said coming to the race in Sao Paulo is the highlight of his year after losing two friends to the virus.

“One of them would surely like to come here too, he was 63 and a big fan of racing," Silvano said. "I know the pandemic is not over. This is the first trip I took in nearly two years, but I had to come, for myself and for those that couldn't.”