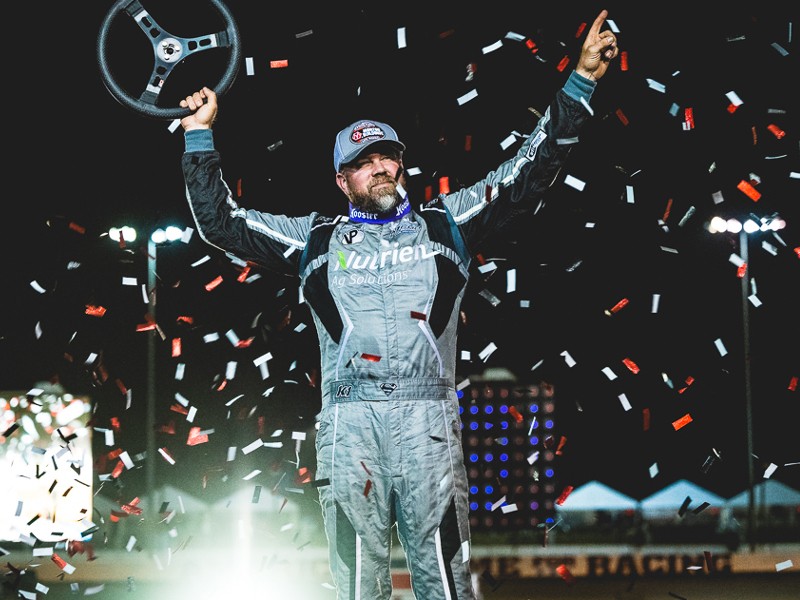 Jonathan Davenport wrapped up the World of Outlaws Morton Buildings Late Model Series in high form over the weekend.

The Blairsville, Georgia speedster swept the NGK NTK World Finals weekend with wins on Friday night at Saturday nigiht at The Dirt Track at Charlotte in Concord, North Carolina.

It marks the fourth and fifth wins for Davenport in the event at the 4/10 mile semi-banked speedway located just outside of Charlotte. It’s also his ninth and 10th career World of Outlaws triumph.

Ricky Weiss grabbed the early lead in the 50-lap feature, but it was short-lived once Sheppard wrestled the position away on lap 12. That’s when Davenport and Weiss waged war for the second, fighting tooth and nail through several restarts in the first half of the event.

Once Davenport dispatched of Weiss, he set his sights on Sheppard and his chance at a win — an opportunity that may not have come without Sheppard catching the back of the field.

“I couldn’t make up hardly any ground on him when he was in clean air,” Davenport said. “Once we got to lap traffic, that’s when I could make some ground up on him and just see what his strengths were and my weaknesses, and I tried to capitalize on what his weaknesses were.”

“I got a big run, and he messed up at just the perfect time for me and worst time for him,” Davenport said. “I slid him getting into turn 3 and just tried to hold on from there.

“We can’t see those signal guys from here, so I was just trying to make consistent laps and try not to mess up.”

Sheppard settled for second, with Dennis Erb, Jr. in third, Tyler Erb in fourth, and Weiss in fifth.

On Saturday night, Davenport made the final pass for the lead on Garrett Smith to drive to back-to-back weekend victories.

Davenport initially passed Smith for the lead on lap 11. His lead slipped away once he caught slower traffic five laps later.

Jason Covert broke Davenport’s momentum, allowing Smith to sneak past him on the inside.

Just as it looked like Davenport’s opportunity for a weekend sweep may have slipped away, contact between his car and Covert sent Covert around and brought out the caution.

That’s when Davenport knew he needed to get up on the wheel.

“I knew that the 10 had beat me the previous lap, so I said oh no, what was I going to do,” Davenport said. “I just kept trying the top down there, it got me to third and almost second on the first lap when everyone went for the rubber, and I just blasted the top, and it stuck somehow.”

The New Berlin, Illinois driver led a few laps, but his car tightened up for the second straight night.

“I got a little snug there at the end of the race,” Sheppard said. “We definitely made improvements on the car; we were better here than we were the last couple of years.

“We’re looking forward to next year and doing some testing before we go to Florida and just fine-tune on this thing because we’re really close and really fast.”

Tim McCreadie and Chris Madden rounded out the top five.

The World of Outlaws Morton Buildings Late Model Series is slated to kick off the 2022 season at Volusia Speedway Park in Barberville, Florida with the Sunshine Nationals on Januar 20-22. For more information, visit WorldofOutlaws.com.