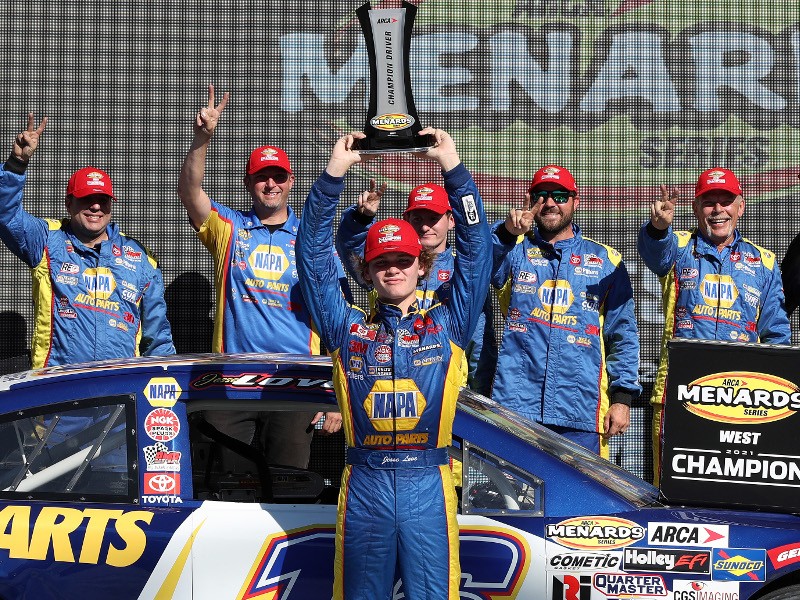 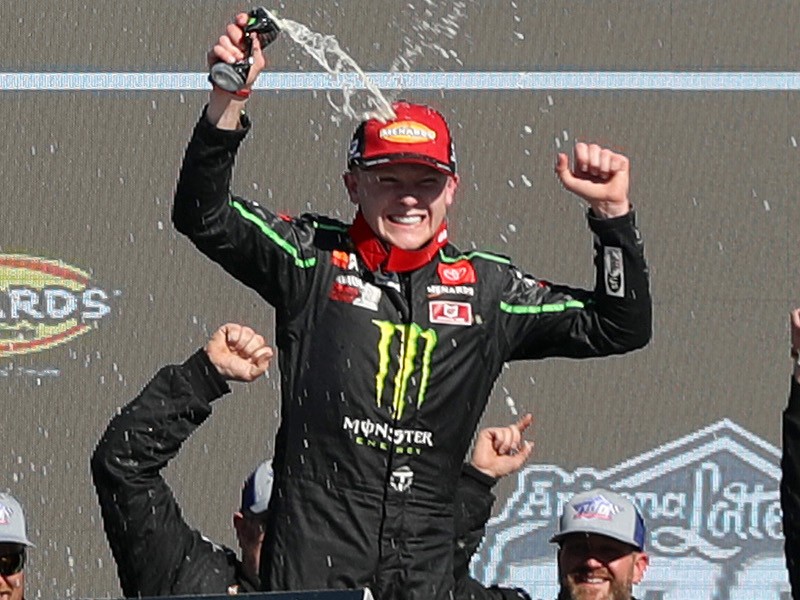 AVONDALE, Ariz. - Jesse Love won the 2021 ARCA Menards Series West championship with one of the most dramatic passes for 14th place one will ever witness.

He did so soon after Ty Gibbs took the checkered flag to win Saturday’s Arizona Lottery 100 at Phoenix Raceway.

Love, the 16-year-old from Menlo Park, California, who entered the 2021 West Series finale with a one-point lead in the championship standings, found himself down one point to Jake Drew as they ran in the closing laps at Phoenix. With Drew running 11th and Love in 15th, based on points, the former was on his way to a title.

Drew appeared to drop off the pace shortly after taking the white flag. Love immediately took advantage and made the pass for 14th. The two ended up tied in championship points, but Love took the title via a tiebreaker (two West Series wins this season to zero for Drew).

“Just needed to get to him. I knew I had to get one spot, and we got to him,” Love said of his passing Huddleston on the final lap. “I wasn’t sure what happened. I was going to get to him one way or another. I wasn’t going to spin him out. I was going to rattle his cage a little.”

“It was just 100 percent focus, push with everything you’ve got,” Drew added. “I gave it my all. I kept my foot in it the whole time, just driving as hard as I could to get at least one more spot and give myself a cushion.

“When we came across, they said we had it, so obviously I was super stoked. Feel a little defeated right now. Which, that’s OK. Drives for more.”

Love became the first back-to-back West Series champion since Todd Gilliland won the title in both 2016 and 2017.

“We’ve been the class of the field all year on almost every different surface,” said Love, who finished second to Gibbs in West Series laps led this season with 183 through nine events.

Including Gibbs’ four NASCAR Xfinity Series wins in 2021, his victory at Phoenix marked his 16th of the year.

“I felt like lapped traffic was one of the biggest challenges,” Gibbs said. “I felt like we were at at dirt race almost. Pick and choose your lines, make sure the right one rolled. Just a great day.”

Gray finished second at Phoenix ahead of Sammy Smith in third, Nick Sanchez in fourth and J.P. Bergeron in fifth.

Moore ended up third in the West Series standings, just two points behind Love and Drew. P.J. Pedroncelli, who finished 18th at Phoenix after spinning early, finished fourth in the final standings. Joey Iest rounded out the top five.