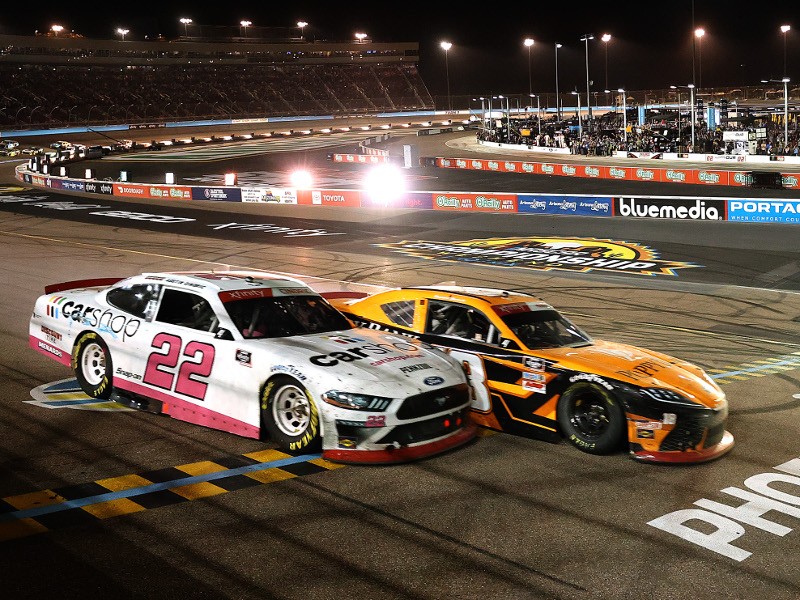 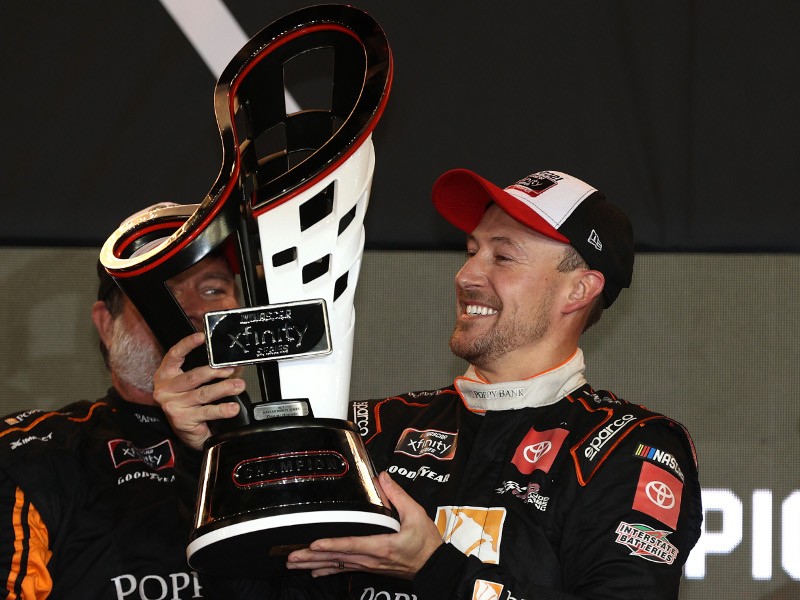 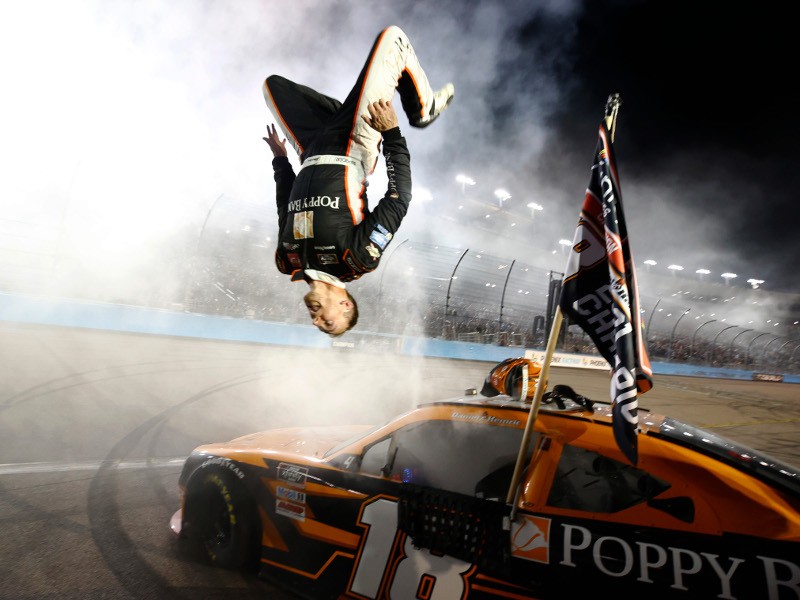 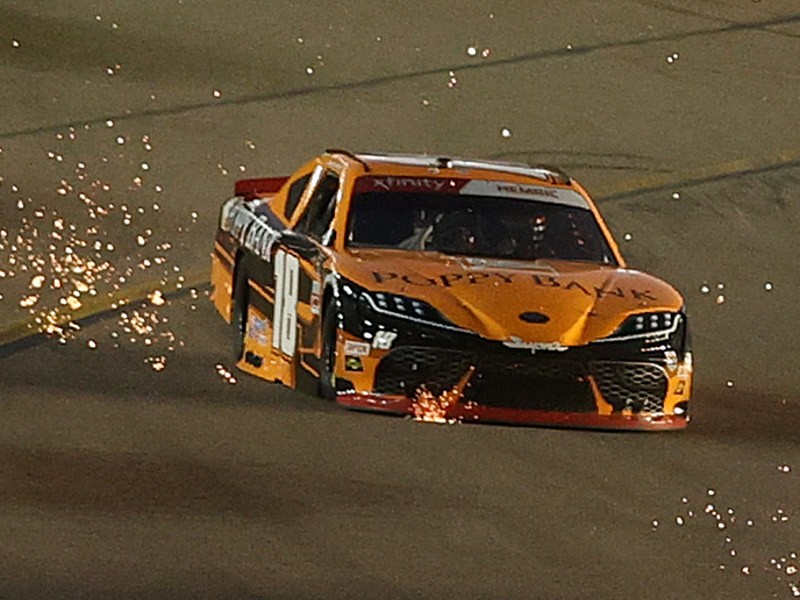 Daniel Hemric picked the perfect time to score his first-ever NASCAR victory – in a race where the winner takes all in the Xfinity Series season-ending race.

Hemric beat out fellow Championship 4 contender Austin Cindric on the final lap of Saturday night’s NASCAR Xfinity Series Championship race at Phoenix Raceway to the win the race and the 2021 championship – besting Cindric, Noah Gragson and A.J. Allmendinger for the title.

The victory was the first for Hemric in any national NASCAR series, having made 207-career starts in Xfinity, Trucks and the Cup Series.

“Unbelievable,” Hemric said as he climbed from his No. 18 Toyota and did a celebratory back flip off the car. “These guys right here, they asked me all year, ‘How bad you want it?’ I gave one away here in the spring. Felt like I had to give one up here last week. We were not going to be denied.

“People have doubted me. I’ll do it all over again for a night like this. This is what it’s all about, winning at the second highest level in all of motorsports. What an honor. Unbelievable. I’d do it all over again. I’ll take all the heartbreaks again to live this right here.”

Hemric took the green flag in second behind Cindric in an overtime shootout and muscled his way under Cindric’s No. 22 Ford Mustang in the final corner and beat out the defending series champion by four feet at the line, collecting his first NASCAR victory and the series title.

Saturday’s victory was a redemption of sorts for Hemric, who spent three years in the Truck Series before joining Richard Childress Racing for a full-time Xfinity Series campaign in 2017.

In 2019, Hemric moved up to the Cup Series for RCR, but was released after just one season, and toiled in the Xfinity Series with a part-time ride for JR Motorsports until signing with Gibbs for the 2021 Xfinity season.

Hemric’s team began the weekend behind the eight-ball right from the start, after the team’s primary hauler broke down en route to Phoenix, forcing the team to utilize an alternate hauler to get Hemric car to the track in time for practice on Friday.

Hemric’s victory spoiled the party for Cindric, who had hoped to end his Xfinity Series career as a two-time champion.

Cindric and Hemric had the two fastest cars all night, with Cindric leading a race-high 113 laps and winning the opening stage, while Hemric took the second stage.

The final stage saw Cindric lead 85 of the final 112 laps before a crash involving Jade Buford and Josh Williams with two laps to go brought the caution flag out for the tenth time and set the stage for a green-white-checkered finish.

Cindric, who had already survived two previous restarts late in the stage, chose the outside lane and drew even with Hemric as the start of the three-lap shootout before inching ahead on the backstretch.

Hemric fought his way back and pulled up inside of Cindric coming through turn four on the final lap and banged doors with Cindric for the final 100 feet before stretching out to a fender-length lead as they came to the line – a margin of victory of .030-seconds.

Cindric – the son of Team Penske team president Tim Cindric – will move up to the Cup Series in 2022 to take over the No. 2 Ford from Brad Keselowski.

“I know my left-rear bumper cover is as vulnerable as ever. Obviously, Daniel was in position to be the advocate of that and he certainly used it and he’s the champion because of it,” said Cindric.

“That’s why it’s so frustrating to come up so short. One lap. One lap is all you need, maybe one restart. You never know, but to make it this far and have the season we’ve had. The stats obviously show the consistency and the way our team has performed throughout the season. It doesn’t matter what type of racetrack. I work with some of the best people in this sport and I’m a better driver because of it.”

Gragson came home 12th in the race and third in the championship battle. Although only credited with leading three laps on Saturday, Gragson kept his Chevrolet in the hunt all race long until contact with the outside wall in the final laps ended his title hopes.

“Yeah, pounded the fence. Just kept sliding and sliding. Threw it away,” said Gragson. “We’re kind of disappointed just with the overall speed we had this weekend. We just got beat by those guys. They brought their A game, and we didn’t have the balance we needed to go compete.

“We never quit. Had an opportunity there at the end. That’s what matters most. Sure, it’s disappointing, but I don’t feel like I overdrove it. I got to go study and see why, if something was on the track. Nobody else spun out. I don’t know what it was. I wish I knew. I wish I could say, I just (expletive) up. I don’t know what happened.”

Allmendinger posted a 14th-place finish in the race and took fourth in the championship standings after a late spin put him deep in the field for the final restart.

Allmendinger earned his highest-career points finish as well as a second-straight top-four finish in the Xfinity Series for Kaulig Racing, who plan to bring Allmendinger along to the fledgling Cup Series operation next season.

“It hurts tonight to not really be involved in the championship discussion throughout the course of the race, but it doesn’t take away from what has been a season that I never imagined ever happening.

“Tonight will hurt a little bit, just be a little bit sad about it, then we’ll be good to go in the off-season, come back stronger.”