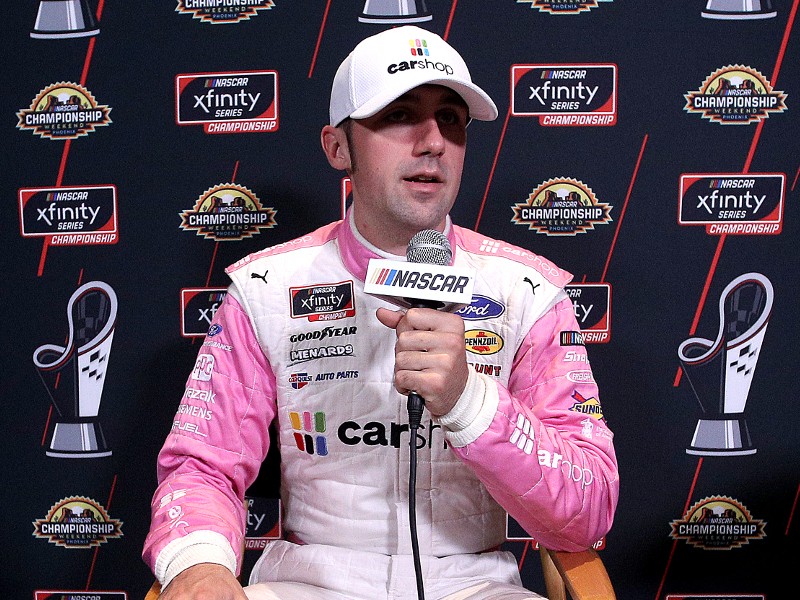 In the NASCAR Xfinity Series, the feat is almost commonplace.

Hendrick Motorsports teammates Jeff Gordon and Jimmie Johnson are the only two Cup drivers in the last 25 years to earn consecutive championships — Gordon with titles in 1997-1998 and Johnson with a record five straight from 2006 through 2010.

Austin Cindric will be racing for his second straight Xfinity title in Saturday’s championship event at Phoenix. If he wins, it can’t be considered a break in form.

“It sounds great to me,” Cindric said of the prospect of a second championship. “It absolutely sounds great. So I’ll take it if you’re handing it out, but otherwise I’ve got to go get it.

“I think the value for me is having another season to let things slow down and focus on some smaller details that might help me in the future. Those are the things I think I’ve benefited from in the 2021 season versus 2020.”

Obviously, the experience of winning a series championship is unique to Cindric within a Championship 4 that also includes Regular Season Champion A.J. Allmendinger, Noah Gragson and Daniel Hemric.

“I think there’s less newness, as far as that’s concerned for me, as far as what to expect out of myself,” said Cindric, who also is trying for his third straight win at Phoenix. “I feel like I learned a lot in a positive way from the mentality that I took. I think I’m bringing that mentality back — just the fact that I’m happy to be here.

“Yeah, I’ve won the championship, but that doesn’t guarantee me anything on Saturday. So, happy to be here, happy to have a shot, happy to be a part of the conversation, happy to be driving fast race cars. So I’m looking forward to making the most of that opportunity.”

An A.J. Allmendinger victory in the NASCAR Xfinity Series Championship at Phoenix Raceway would guarantee two things: 1) an unprecedented celebration involving the driver, team owner Matt Kaulig and team president Chris Rice; and 2) a scream from Allmendinger’s father that would drown out those of his son.

What it won’t be is a life-changing experience for the driver of the No. 16 Kaulig Racing Chevrolet, who will turn 40 on Dec. 16.

“When it comes to winning a championship, yeah, it would be so special,” Allmendinger said during Xfinity Series Championship 4 Media Day interviews at the Phoenix Convention Center. “I’m going to be nervous as can be standing by the car, getting ready to go.

“But if we’re going to be brutally honest, if I win it or I don’t, for me personally, it doesn’t change my life. Of course, I want to win a championship in NASCAR. I’ve been here 15 years trying to do it… I’d love to win it, and, hell, the celebration if we win it may be better than anybody’s you’ve ever seen.

“Between myself and the whole team, but between me, Chris and Matt — you may never hear from us again.”

Allmendinger’s father, Greg Allmendinger, is certain to be a big part of the celebration.

“If we’re fortunate enough to win this thing on Saturday, you will hear the loudest scream from my dad,” Allmendinger promised. “Anybody who’s been around my dad — you get a little insight into who I am once you meet my dad.”

That’s why the driver of the No. 9 JR Motorsports Chevrolet arrived at Thursday’s Xfinity Series Championship 4 Media Day, sporting a bushy beard.

“(Former NASCAR driver) Brendan Gaughan texted me after we won Martinsville (last Saturday), and he was like, ‘That ugly beard’s got to go,’” Gragson said. “I wish I could grow a good one, but, yeah, it’s like hockey guys… I’m a big Golden Knights fan, and they grow their Playoff beards.

“I got my hair cut before we went to Vegas for the start of the Playoffs, and it’s kind of a Playoff beard and Playoff haircut — (I won’t) shave it until the Playoffs are over. Just another week.”

After his triumph at Martinsville in a must-win scenario in the Round of 8 elimination race, Gragson is approaching Saturday’s championship race with an air of confidence.

Then again, to borrow another concept from his hometown, he’s playing on house money.