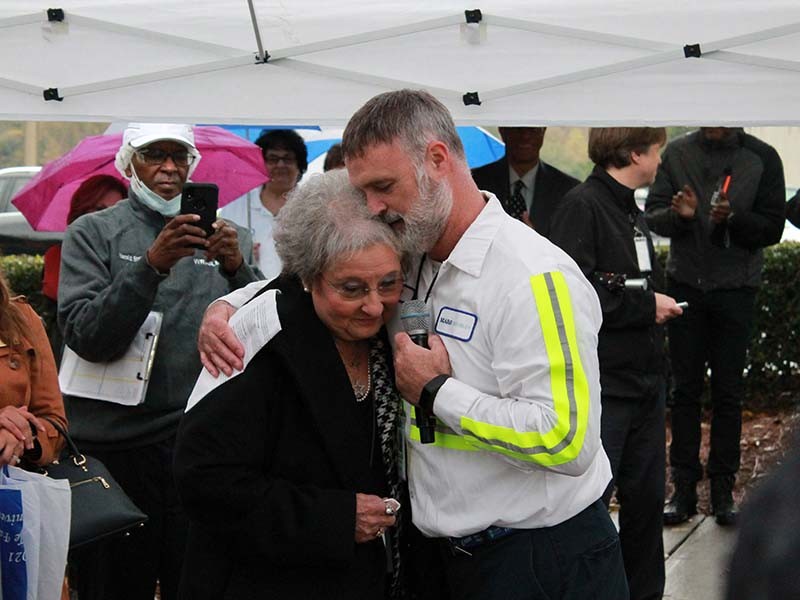 Matt Arends, site manager for the Mars Wrigley plant in Flowery Branch, embraces Janis Bryant, an employee at the plant for 50 years. Plant leadership dedicated a pavilion outside to Bryant following the 50th anniversary celebration this morning.
Contact Editor

Motorists who frequently drive on I-985 as it runs through Flowery Branch have probably smelled Spearmint or Juicy Fruit wafting from the Mars Wrigley plant on Atlanta Highway.

Today, site staff and leadership hosted a 50th anniversary celebration for the plant, which opened as a Wrigley's plant in 1971. The Wrigley company merged with Mars in 2008 and the Flowery Branch plant integrated in 2017.

A large focus of the ceremony was family; Mars Wrigley is itself a family-owned company. Matt Arends, site director for the plant, said many of the employees that work there now have been a part of the "family" for a long time.

The last employee Arends mentioned is Janis Bryans. Bryans has worked at the plant since shortly before it even opened.

Arends said the pavillion will be for employees and their families alike to enjoy during their lunch break or while waiting on each other to complete shifts.

Bryans, a Flowery Branch native, expressed her enthusiam of working for a company that has put so much into the local economy for so long.

"It's been great and I've seen people go to work and come in and just enjoy it...it's brought in other industries too," said Bryans.

Bryans currently works in gum recovery at the plant. She said she has only worked in one other department, which was the one she was hired in before moving to gum recovery a few weeks later.

Bryans said her father started working at the plant when it opened and she begged him to help her get a job as well. She interviewed for a job, and despite some doubts expressed by her interviewer, got the call she'd been hoping for shortly after.

"On the other end of that phone was the personnel manager, and he said, 'Do you want to come work for us?' and I said, 'Oh my goodness, yes!'" said Bryans. "I mean, it was like just no time before I got that call."

Bryans is one of 950 associates at the plant. When the plant opened, she was one of 100 associates.

In 2019, Mars Wrigley announced plans to make 60-million dollars worth of improvements to the facility, as well as add an additional nearly 130 employees.

According to Arends, the plant now produces around 600-thousand pounds of gum each day. That includes the usual Spearmint and Juicy Fruit, as well as other products such as Orbit and 5 gum. According to information provided by a Mars Wrigley spokesperson, the plant also produces 75 percent of the gum market in North America.

Vincent praised plant staff for a "record production" during the height of the COVID-19 pandemic and called the plant a "crown jewel."