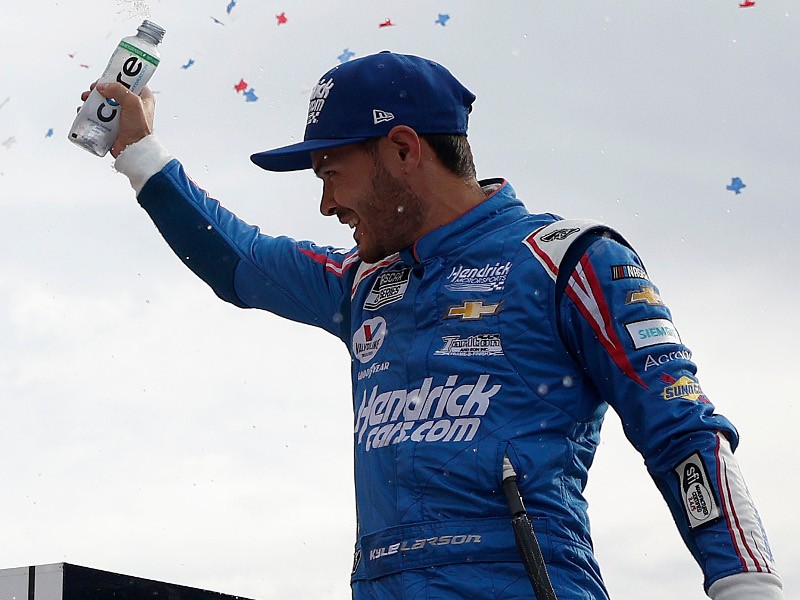 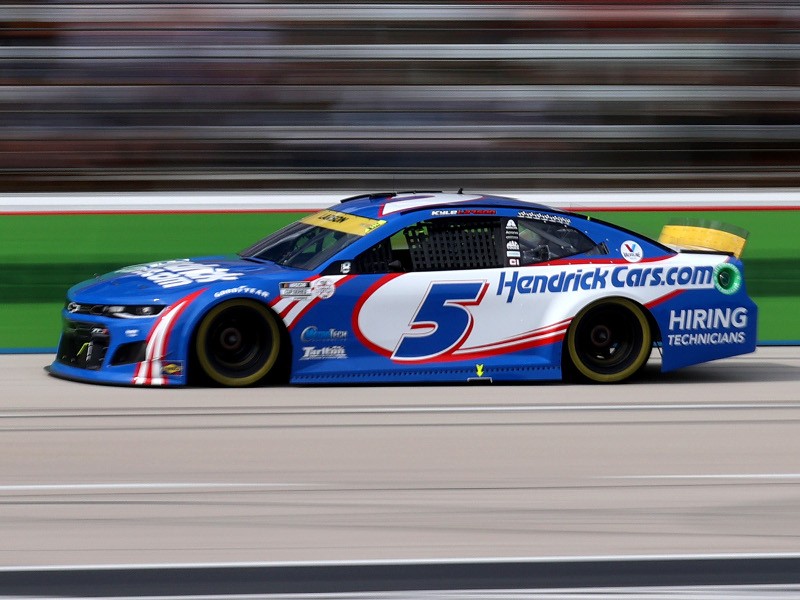 Kyle Larson was unbeatable on Sunday in the Lone Star State.

Larson led 256 of the 334 laps in the NASCAR Cup Series race at Texas Motor Speedway en route to his eighth win of the season.

More importantly, the win locks the California native into the Championship 4 for the first time in his career.

“Yeah, this is unreal. I knew we had a good shot to win today, and our car was amazing,” said Larson after recording his 14th career series win. “That’s probably the best 550 package, intermediate car, we’ve had all year. So, thanks to everybody on this No. 5 team, HendrickCars.com, Rick Hendrick, this is so cool, we had a lot of people from HendrickCars here. We get to go race for a championship in a few weeks. This is crazy.”

Larson had to survive a series of restarts in the final 30 laps, but was never seriously challenged for the victory, as he held off his Hendrick Motorsports teammate, William Byron, to take the win.

“I just got good pushes from behind me, really,” Larson said. “I tried to stay patient on the throttle to keep them to my back bumper. And thankfully, I was able to just barely clear them every time into (turn) 1 and not have to fight off of (turn) 2. So thanks to William (Byron) and Tyler (Reddick) and Brad Keselowski, anybody who was ever behind me, especially Brad there in that last restart. So, it was just awesome to win and hope we can get some more wins throughout the rest of the year.”

While it was a winning day for Larson, it was not so much for some of the other title contenders.

Denny Hamlin came into the Round of 8 opener as one of the title favorites, but a pair of incidents spoiled what could have been a strong run. A spin due to a cut tire with 20 laps to go put him at the back of the pack. He was then caught up in a crash with seven laps to go left his No. 11 Toyota with heavy front end damage. He soldiered home to an 11th place finish, and currently sits third in the Playoff standings.

“It’s insane. I think we ended up gaining a point over the cut, somehow,” Hamlin said. “I don’t know. It’s just a crazy day. The way these cars race where we are packed up for a couple laps, you just never know. It’s going to be the same way at Kansas. Hopefully we bring a fast piece there and we can go there and compete for a win.”

Joey Logano had run in the top 10 all day, but suffered an engine failure with 35 laps to go that sent him to the garage. It marks the first engine failure for Logano in seven years, with the last coming at Pocono Raceway on June 8, 2014.

Logano finished 30th, and leaves Texas last in the Playoff standings, 43 points below the cutoff.

“I thought it was starting to maybe give up a little bit of power in that run,” Logano said. “We were just getting passed. Not really though. It just kind of let go. It is one of those days when nothing went right.”

Martin Truex, Jr. was running in the top 10 when contact between with Daniel Suarez sent Truex’s Toyota hard into the outside wall with 14 laps to go, ending his day. He was credited with a 25th place finish, and will go to next weekend’s race at Kansas Speedway seventh in the standings, 22 points below the cutoff.

“I was definitely running tight trying to get all we could and maybe I squeezed him (Daniel Suarez), maybe he came up, I’m not sure,” said Truex, Jr. “I don’t even know if we touched. I got loose and when I gathered it up (shown replay). Yeah, we touched for sure. It’s really fast right there and yeah, hit the splitter and went straight to the fence. Tough spot to have contact like that. I don’t know. It is what it is.”

Dawsonville, Georgia’s Chase Elliott was never really a factor in the race, losing a lap at one point due to a tire issue. He would battle back to a seventh place finish, and sits fifth in the Playoff standings, eight points below the cutoff.

“I appreciate everybody continuing to fight through that and get our car a lot better,” Elliott said. “I thought by the end, we were decent. Just by that point, obviously, it was too late. I had another one vibrate again after that, so I’m not really sure what we had going on there. I’m still currently confused. So, we’ll see.”

Meanwhile, it was a pair of non-Playoff drivers that chased Larson to the checkered flag, with Byron in second and Christopher Bell in third.

Brad Keselowski finished in third, but that was only good enough to move him to sixth in the Playoff standings, 15 points below the cutoff. Non-Playoff driver Kevin Harvick finished in fifth.

Playoff contender Ryan Blaney finished in sixth, moving him to second in the Playoff standings, with Elliott in seventh. Kyle Busch battled back from an early pit road speeding penalty to finish eight, and leaves him in fourth in the standings, eight points above the cutoff. Non-Playoff drivers Tyler Reddick and Suarez rounded out the top 10.

While the race was a runaway up front, the event was slowed 11 times for cautions, with nine of those coming for on-track problems.

Fifteen cars were gathered up in the incident, which occurred on a lap 31 restart when Bubba Wallace’s Toyota spun in the pack as the field raced off turn 2, gathering up several cars in the melee.

The previous largest crash at Texas occurred on the opening lap of the inaugural race on April 6, 1997, when 13 cars were caught up in a crash going into turn 1.

Another scary moment occurred on lap 304, when contact Chris Buescher’s car almost spun in turn 1 after contact with Kyle Busch. As the field slowed to avoid the situation, Anthony Alfredo’s Ford spun after contact with Chase Briscoe, sending Alfredo’s car backing into the outside wall.

As Alfredo’s car came to a rest at the bottom of the track, a fire broke out at the back of the vehicle. Alfredo quickly climbed out of the car and was uninjured.

The race was red flagged for about 12 minutes to allow track crews to clean up the crash scene before the race resumed.

*Locked Into The Championship Round 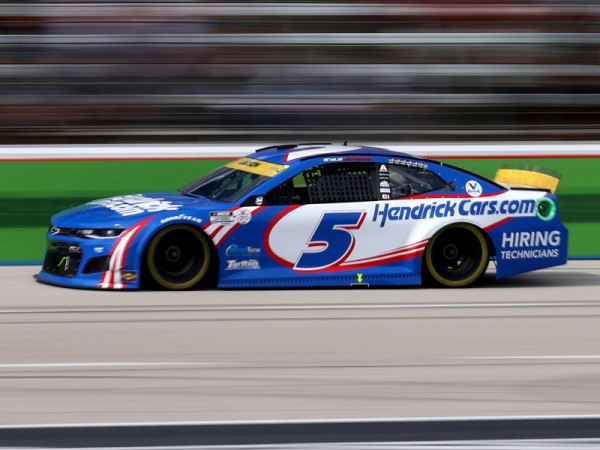 Larson dominates at Texas for NASCAR Cup victory
Kyle Larson was unbeatable on Sunday in the Lone Star State. Larson led 256 of the 334 laps in the NASCAR Cup Series race at Texas Motor Speedway en route to his eighth win of the season. 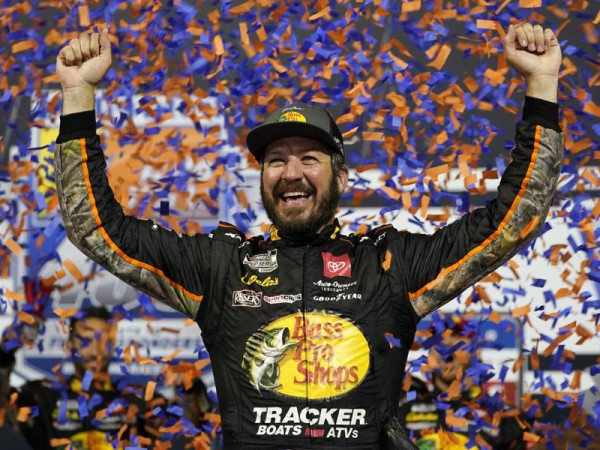 Truex in tight NASCAR chase for start of round of 8 in Texas
Martin Truex, Jr. remembers the hours of boredom watching television and the rain in Texas, then coming so close to another championship chance when that playoff race last fall... 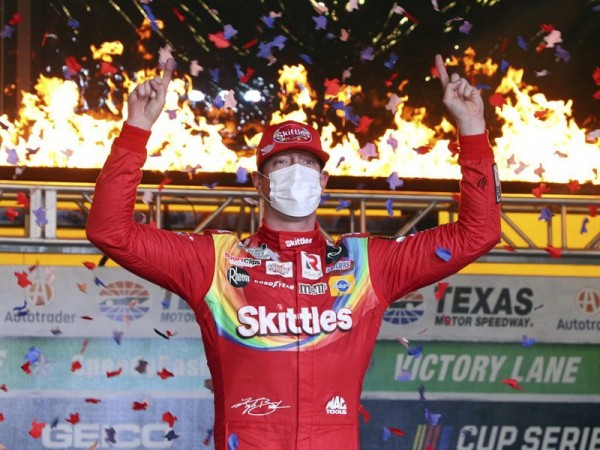 NASCAR Cup Playoffs Round of 8 opens at Texas
The NASCAR Cup Series Playoffs point standings have re-set and the eight drivers advancing to the Round of 8 have had a sort of mental re-set as well with their season hopes... 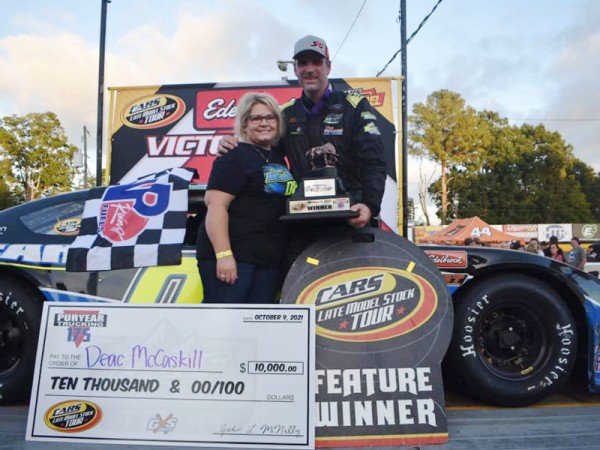 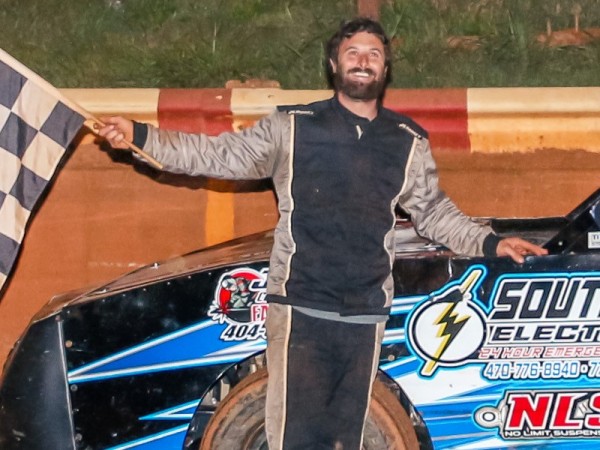 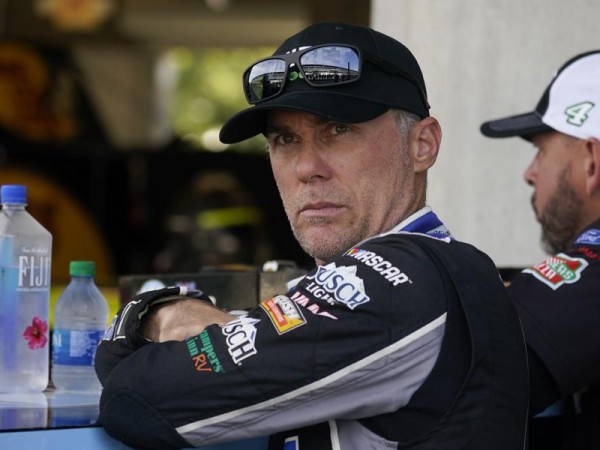 Harvick out to stop earliest playoff elimination of career
This is it for Kevin Harvick, a winner of nine races just last year and now on the verge of his earliest career playoff knockout. The steadiest guy in the garage is winless this season... 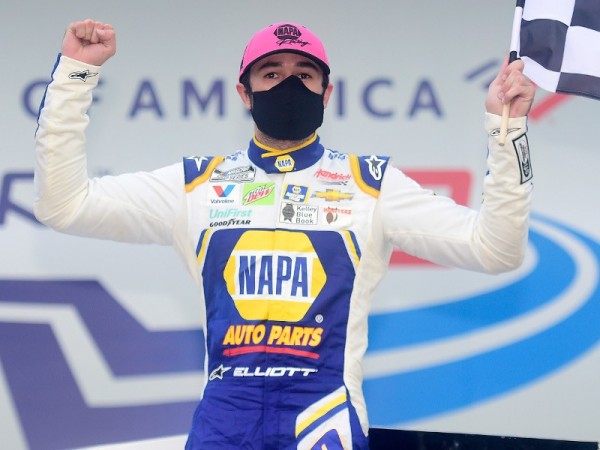 Eliminations loom for Cup Playoff drivers at Charlotte
The Charlotte Motor Speedway infield road course is set to punctuate what has been a thrilling and unpredictable second round of the 2021 NASCAR Cup Series Playoffs... 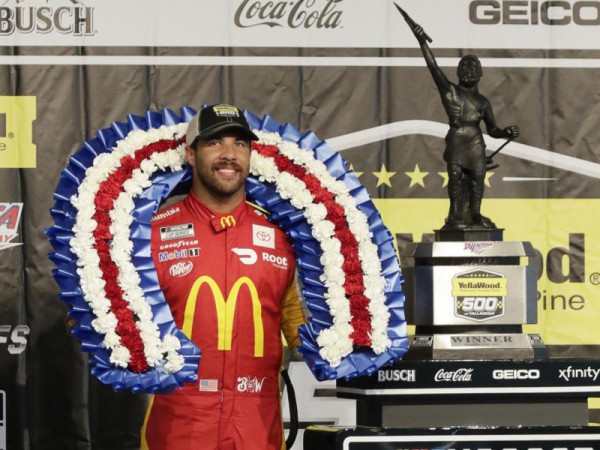 Truex in tight NASCAR chase for start of round of 8 in Texas
Martin Truex, Jr. remembers the hours of boredom watching television and the rain in Texas, then coming so close to another championship chance when that playoff race last fall...
By Stephen Hawkins - AP Sports Writer 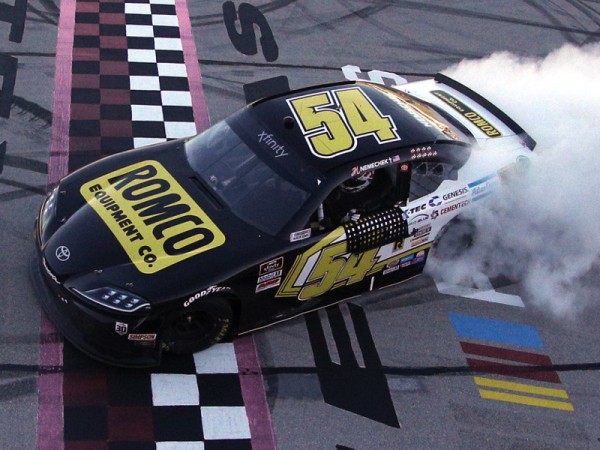 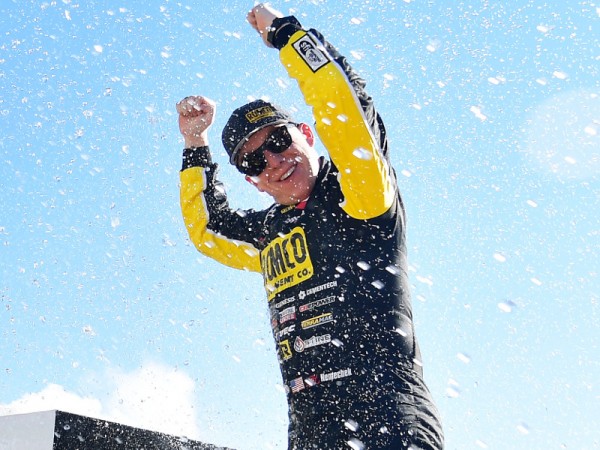 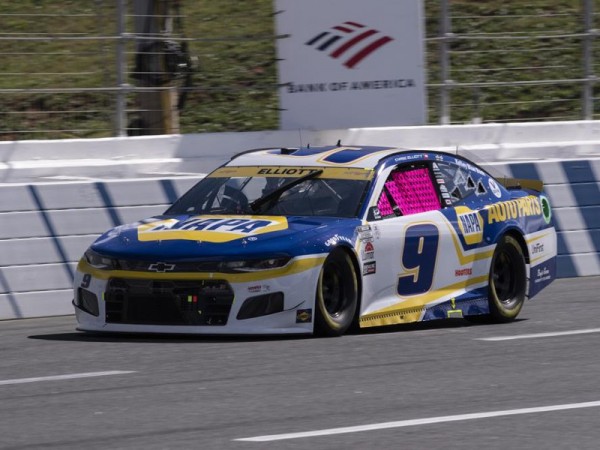 Elliott eases into Texas following NASCAR-ordered cease fire
It only took about a day after Chase Elliott wished Kevin Harvick “a merry offseason and Happy Christmas” for NASCAR's reigning champion to get the zinger on merchandise on his official website.
By Jenna Fryer-AP Auto Racing Writer

NASCAR Cup Playoffs Round of 8 opens at Texas
The NASCAR Cup Series Playoffs point standings have re-set and the eight drivers advancing to the Round of 8 have had a sort of mental re-set as well with their season hopes...
By Holly Cain-NASCAR Wire Service
Privacy | User Agreement | Contact | Advertise With Us
2022 © Jacobs Media Corporation. All rights reserved. EEO Report. Website by Full Media
Login / My Access
close
Search