BUFORD — No. 1-ranked Buford rolled into the second round of the Georgia High School Association Class 6A playoffs on Wednesday after sweeping Kell 3-0 and 13-4 at home in the first round.

Junior Olivia Duncan picked up her 11th win of the season for the Lady Wolves in the first game. Duncan struck out 8 and walked just 1one batter in a complete-game effort.

Buford scored two runs in the fourth on Duncan's second home run of the season and another in the fifth. Senior Taylor Malvin had three hits for Buford.

In the second game, sophomore Emma Grace Williams imrpoved to 8-0 in the cricle allowing four runs on seven hits in the five-inning win.Williams also struck out five. Duncan, who hit her second home run of the day in the second game, helped lead a 12-hit attack.

The Lady Wolves, the No. 2 seed from Region 8-6A, next will travel to Region 2-6A champion Effingham County near Savannah for their second round matchup.

In other first round action, Class 7A No. 1-ranked North Forsyth was shocked by Mill Creek in the first round. The Lady Raiders dropped the opening two games, 5-3 and 5-2, to the Lady Hawks at home on Wednesday.

In Class A Public, 2020 state runner-up Commerce opened its tournament in impressive style taking a 8-0 and 15-0 sweep over Armuchee on Wednesday. The Lady Tigers next will travel to Region 2-A Public champion Lanier County in the second round.

In Class 3A, Cherokee Bluff routed Greater Atlanta Christian at home with 12-0 and 17-0 wins at home.

At the plate Izzy Herren also had two homers with 6 RBI to help pace the offense. Lauren Rule hit a pair of home runs and drove in four, Kate Herren had 3 hits and knocked in six runs, and Tally Ragone had 3 hits for the Lady Bears.

Cherokee Bluff, the No. 2 seed from 7-3A, will await the Appling County-Johnson-Savannah winner in the second round.

Region 7-3A champion East Forsyth hammered Cedar Grove 15-1 and 20-3 to advance to the second round. The Lady Broncos will play host to the Pierce County-Windsor Forest winner next week in the second round.

In Class 2A, Union County advanced to the second round with a 5-1 win over Pace Academy in their deciding Game 3 in Atlanta. The Lady Panthers won the first game, 7-4, but dropped the second game, 21-13, on Tuesday.

Union County will play the Oglethorpe County-Toombs County winner in the second round. That series also went to a deciding third game.

Softball playoffs: Buford, Bluff, Union Co. all move into 2nd round
No. 1-ranked Buford in Class 6A and Cherokee Bluff and East Forsyth in Class 3A all rolled into the second round of the Georgia High School Association playoffs on Wednesday with big wins...

Softball: Cherokee Bluff advances to second round with sweep of GAC
Cherokee Bluff exploded for 29 runs to blow past Greater Atlanta Christian and advance to the second round of the Class 3A softball tournament at home on Wednesday. 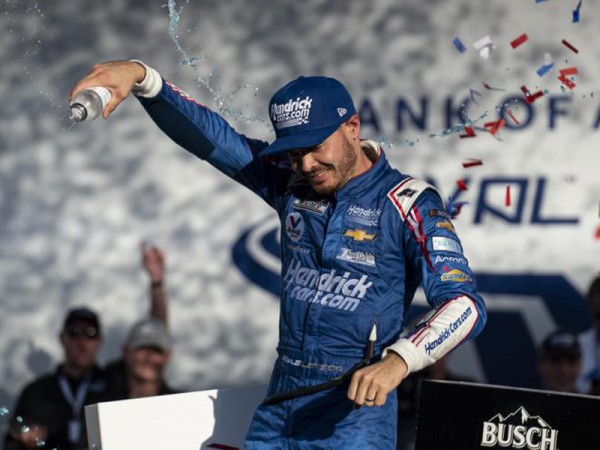 PODCAST: Hard Left Turn - Larson overcomes early trouble to Charlotte win
Early on, it looked like battery issues could derail Kyle Larson's race day. But by the end, he was standing in victory lane for the seventh time this year.
Sports