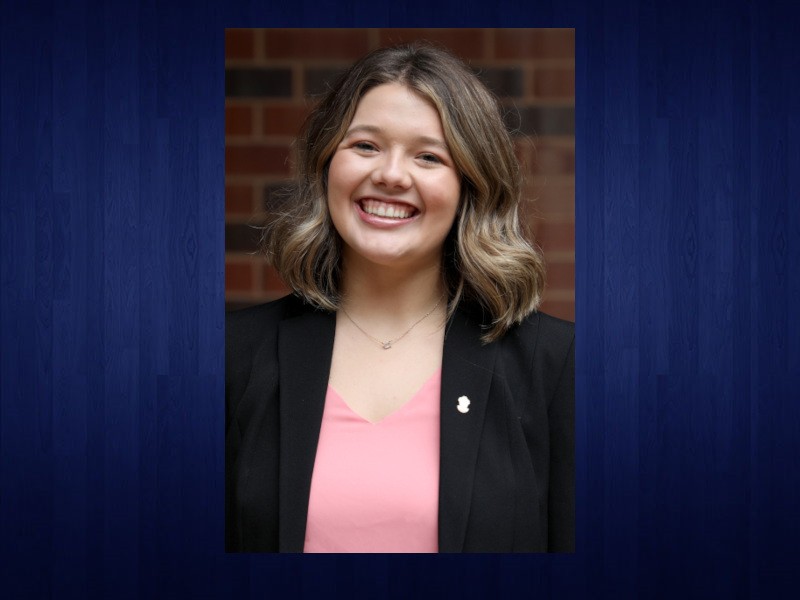 Byers and the other students selected to serve on the 2021-2022 council will meet with Superintendent Woods for discussions on the impact of state educational policies on the classroom.

For Byers, acceptance onto the Student Advisory Council had been a long time coming. She applied for a position on the council her ninth, tenth and eleventh-grade years, but was not accepted until this year, her senior year.

“I was very candid in my application,” Byers said. “I wanted to have my voice heard and I wanted to offer a perspective that is not often heard from a more rural school district.”

Byers said she worked with the Jackson County Board of Education over the summer prior to her senior year, giving her a unique view which she would like to share during her time on the council. She said she also wants to share her passion for education with the council, something which is immediately evident by her love of learning.

“I love to learn, I know that’s a terrible, terrible cliché, but I really do,” Byers said. “I’m a really big science nerd, I love all the STEM subjects, but just in general, I love to learn about different things.”

Byers is currently dually enrolled at the University of Georgia, where she is taking accelerated Spanish and microeconomics. At EJCHS, she is taking AP Calculus, AP Psychology and Honors Economics. Even while taking such an intense selection of classes, she is also heavily involved at her school and in her community.

“I’m very involved with our beta club … we were actually inactive whenever I started our beta club and now, we have 120 members and we log over 2000 service hours each year,” Byers said. “Additionally, I am a big proponent of our student council here.”

Byers, who is currently the president of the beta club, said East Jackson did not originally have a student council, so she partnered with several teachers to create the organization which has about 60 elected members each school year.

Byers said she was extremely excited when she had found out she had been accepted to the Student Advisory Council, as she feels that she thrives in environments where she is able to share her voice and listen to the perspectives of others.

“I was completely and totally over the moon,” Byers said.

The Student Advisory Council has not yet held its first meeting at the time of this story’s publication, but Byers said she is excited to generate feedback that could improve public education throughout the state.

While the application process is over for the 2021-2022 year, Byers said she would encourage anyone to apply next year.

“Each one of us has a very unique voice, and you do not need to filter that voice for anyone,” Byers said. “The entire purpose in my opinion is to have those different voices synchronized to create a larger picture that can better Georgia Public Education.”

Several other students from northeast Georgia were selected to serve on the council this year, including the following: