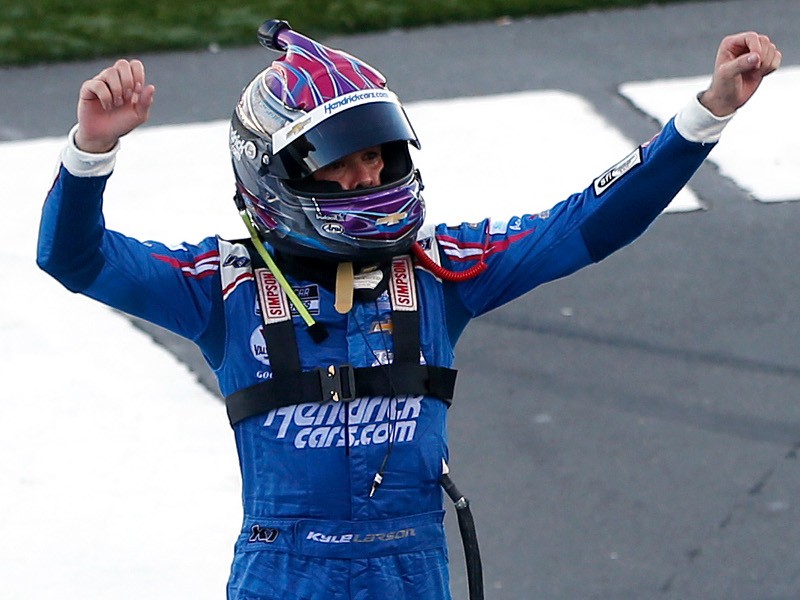 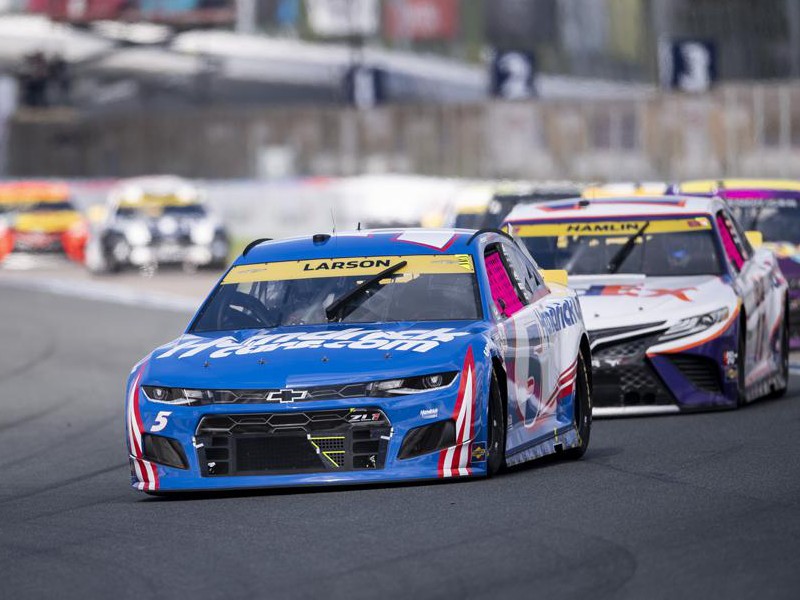 Kyle Larson took the checkered flag after 109 laps at the Charlotte Motor Speedway infield road course to win for the seventh time this season and advance to the Round of 8 in the NASCAR Cup Series Playoffs.

Larson won for the third time on a road course — the most ever in series history in a single season — in a race that featured the violent renewal of the Bristol-born rivalry between Kevin Harvick and Chase Elliott.

And Larson’s victory was no stress-free Sunday drive. Car chief Jesse Saunders and hauler driver Steven Legendre changed the battery and alternator belt on Larson’s No. 5 Hendrick Motorsports Chevrolet under caution and kept him on the lead lap at the end of Stage 2, after the voltage dropped and put Larson in danger of elimination from the Playoff.

“It wasn’t looking too good,” Larson said of the electrical problems that beset his car. “Thankfully, everybody on our 5 car did a great job of staying calm. (Crew chief) Cliff (Daniels), as always, did a great job of communicating with me what was going on, getting the battery changed, the alternator — whatever was going on to get our battery running.

“I knew I was going to have some sketchy moments. I had to work my way through traffic, stay calm, and we had some good restarts there at the end… It was just a fun race there and a lot of craziness all day long.”

The victory was Larson’s first at the Charlotte road course and the 13th of his career.

Harvick failed to advance from the Round of 12 for the first time since the inception of the elimination format in 2014. His race ended in the SAFER barrier on lap 99 after he locked up the left front tire on his No. 4 Stewart-Haas Racing Ford and shot straight into the wall.

“Karma,” Elliott’s spotter, Eddie D’Hondt, said on the radio with understandable satisfaction, given that Harvick had spun Elliott into the wall in turn 8 to jeopardize the reigning Cup champion’s chances of advancing to the next round.

But Elliott did advance after recovering to finish 12th, joining Larson, Denny Hamlin, Joey Logano, Ryan Blaney, Kyle Busch, Brad Keselowski and Martin Truex, Jr. in the Round of 8.

Joining Harvick on the sidelines were Christopher Bell, Alex Bowman and William Byron, who led a race-high 30 laps but lost track position after a bump from race runner-up Tyler Reddick entering the backstretch chicane after a restart on lap 90.

Byron missed the corner and had to come to a full stop before continuing. Later, he was running third before hitting the wall on the penultimate lap. Needing a victory to advance to the Round of 8, Byron instead finished 11th.

Harvick’s shot into Elliott’s back bumper on lap 55 appeared to be retaliation for the September 18 Night Race at Bristol Motor Speedway, where, in Harvick’s view, Elliott cost him a victory by taking his line in the late stages of the race — after Harvick made contact and cut a tire on the No. 9 Chevrolet.

Asked whether his intent was payback for the Bristol race, Harvick said, “Sometimes real life teaches you good lessons.”

Notes: Larson is the first driver since Kasey Kahne in 2006 to win both the Coca-Cola 600 in May and the fall race at Charlotte Motor Speedway. Kahne won both races on the 1.5-mile oval. The layout became the venue for the fall race in 2018… Larson enters the Round of 8 as the No. 1 seed with 4,065 points, 35 more than second-place Hamlin… The victory was Hendrick Motorsports’ 36th at Charlotte Motor Speedway, including the oval and road course events and the NASCAR All-Star Race… Team Penske is the last organization with all off its Playoff drivers still eligible for the championship – Keselowski, Logano and Blaney.