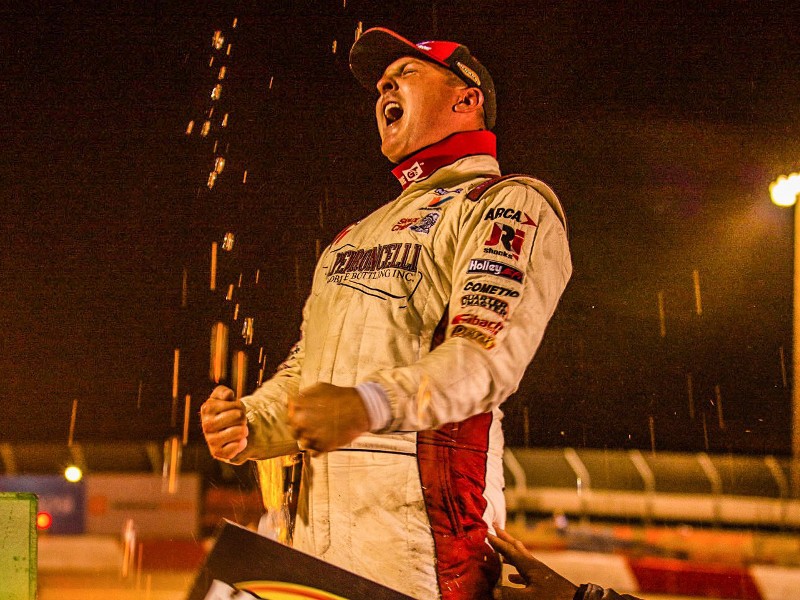 ROSEVILLE, Calif. - P.J. Pedroncelli said after Saturday night’s NAPA AutoCare 150 at All American Speedway in Roseville, California he was not pleased to see a caution fly on the race’s final scheduled lap. He would have been thrilled with a career high second-place finish, he said.

But that last-lap caution set up the overtime restart that allowed the 31-year-old from Sonoma, California, to win his first ARCA Menards Series West race in dramatic fashion.

With the green and white flags waving simultaneously following the late caution, race leader Joey Iest fired off from the top lane. But Iest was unable to clear Pedroncelli’s No. 33 Toyota in turns 1-2 of the third-mile paved oval.

By the time the leaders reached turns 3-4 on the last lap, Pedroncelli had the inside locked down, and he was able to muscle past Iest coming off turn 4 to take the checkered flag.

Pedroncelli, who has been racing in the West Series on and off since 2008, earned his first series win in his 21st start.

“We fought hard the whole race,” Pedroncelli said. “I was trying to conserve at the beginning, got involved in some stuff. I don’t even know how this happened. We came all the way from the back.”

The result was also huge for West Series points.

Pedroncelli entered the penultimate race of the season tied for fourth in the standings. He was 15 points back from leader Jesse Love.

Now Pedroncelli is second in the standings, just a single point behind Love heading into the season finale at Phoenix Raceway on Nov. 6.

Pedroncelli’s first West Series win came with his family in attendance. That includes his father Paul, who was in the field at All American and finished 23rd.

“It means the world,” Pedroncelli said, fighting back tears, when asked what it was like to share this moment with his loved ones. “It’s really cool.”

Love suffered a disappointing 12th-place finish, which primarily was the result of a late-race incident with championship rival Jake Drew.

Drew, coming to the white flag got into the back of Love’s No. 16 Toyota in turns 3-4, sending the defending West Series champion in to a spin.

The incident was significant since Drew entered the night seven points back from Love in the season-long title race.

Drew finished eighth. He dropped to third in the championship standings, but he is just three points back from Love and two points behind Pedroncelli.

Iest finished second Saturday night ahead of Trevor Huddleston in third, Todd Souza in fourth and Cole Moore in fifth. Those results left Iest fourth in points and Moore fifth.

The season ending Arizona Lottery 100 is scheduled for Saturday, November 6.