Harvick out to stop earliest playoff elimination of career 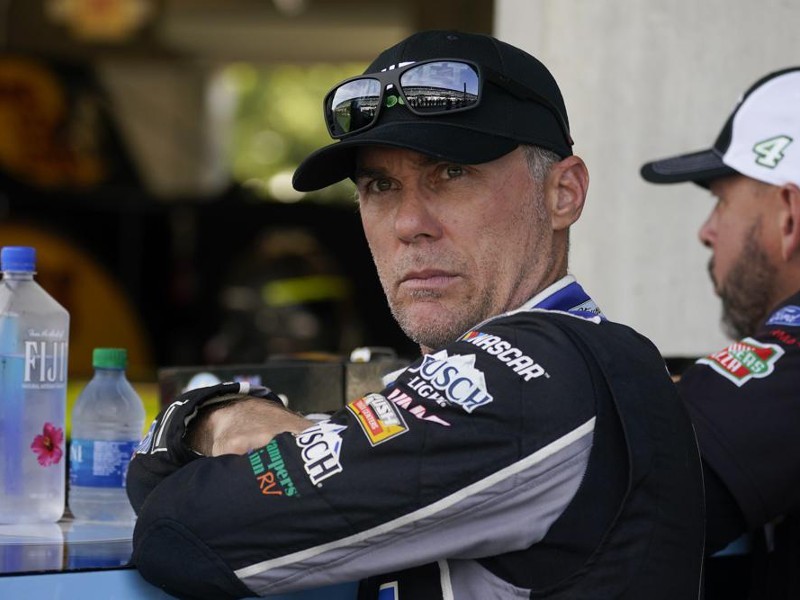 FILE - In this Saturday, Aug. 14, 2021, file photo, Kevin Harvick waits in his garage before practice for a NASCAR Cup Series auto race at Indianapolis Motor Speedway, in Indianapolis. Chase Elliott, according to Harvick, doesn't race very smart. In fact, moving forward in NASCAR's playoffs, Harvick plans to run all over the reigning Cup champion. Those were the angry words Harvick had for Elliott after the race at Bristol Motor Speedway, Saturday, Sept. 18, where a feud no one saw coming took center stage. (AP Photo/Darron Cummings, File)
Contact Editor

CONCORD, N.C. (AP) — This is it for Kevin Harvick, a winner of nine races just last year and now on the verge of his earliest career playoff knockout. The steadiest guy in the garage is winless this season — he's on a 38-race losing streak — and needs a big day at Charlotte Motor Speedway to avoid playoff elimination.

Harvick has made it through the second round of the playoffs every year since the elimination format started in 2014, the year he won his only Cup title. Harvick is such a solid bet to be a contender because he's always in the hunt, always among the leaders, and he's advanced to the championship round in five of seven seasons.

And yet he heads to the infield road course at Charlotte on Sunday ranked ninth in the standings, the first driver below the cutline. The field will be trimmed from 12 to eight after this race, and Harvick lags nine points below the final transfer position.

Harvick, the same guy who slammed his helmet in rage after on-track shenanigans with reigning champion Chase Elliott cost him a win last month, was surreally serene headed into the make-or-break race.

“I’m kind of a creature of habit, do the same things on a weekly basis, and it’s just another race,” Harvick said. "I know that sounds cliché and boring and all the things that come with that, but you just have to go out there and do what you do, the best you can, and see where it falls.”

It's been a bad year at Stewart-Haas Racing and Harvick and the No. 4 team are the biggest losers. They dominated all the way up until the third-round finale last season and this year have been fairly mediocre.

His eight top-fives and 21 top-10s are the lowest since 2012, but even in that uncharacteristically off year Harvick still won one race. Harvick's best shot was at Bristol in the first-round finale but Elliott, angry at Harvick over another on-track incident, intentionally slowed Harvick to help Hendrick Motorsports teammate Kyle Larson catch Harvick and steal the win.

The second round has been OK — Harvick was ninth at Las Vegas, and he was running eighth on Monday when Talladega was called for rain — but that's not good enough. Harvick, Christopher Bell of Joe Gibbs Racing and Hendrick teammates William Byron and Alex Bowman are all below the cutline going into the hybrid track that uses both the road course and oval at Charlotte Motor Speedway.

Denny Hamlin is the only driver locked into the third round and Harvick doesn't need a win to advance. It's tight right ahead of him and Kyle Busch and Elliott are tied for the final two spots, only nine points ahead of Harvick. Ryan Blaney, in sixth, only has a 15-point cushion.

A top-five for Harvick coupled with a disaster for any of the other three might be enough to get Harvick through to the round of eight.

“I've had a lot worse seasons, I know that for sure,” said Harvick, a 20-year veteran who turns 46 in December. “I've lived through a whole bunch that are way worse than this one.”

The 2001 season is top of Harvick's mind, his rookie year when he was called up the week after Dale Earnhardt's fatal crash in the season-opening Daytona 500. Harvick ran both the Cup and then-Busch Series that season, a grueling 68 races that ended with NASCAR's second-tier championship.

Harvick, a young hothead and former high school wrestler from Bakersfield, California, replaced Earnhardt and became something of a savior for a Richard Childress Racing team that could have collapsed. When the adrenaline and emotions finally found the checkered flag, the team fell flat in a miserable 2002 season.

“I personally have been through some pretty tough years and this one has just been a struggle because (we've) had to work so hard to get everything that we have," Harvick said.

“We also have learned a lot about the other side of the fence, as far as having to dig your heels in and do things that you haven’t had to do. Whether you like it or not, the race is coming up next week, and you’re gonna have to participate whether your car is slow or fast and you got to figure out how to make the most out of that.”

Harvick sure sounded as if he's at peace with his fate headed into Sunday and if there's any lingering hard feelings against Elliott a full three weeks after their dustup at Bristol, Harvick hasn't tipped his hand.

The consensus seemed to be that Harvick, someway, somehow, would find a way to derail Elliott's bid for a second consecutive title as payback for Bristol. Charlotte is as big a stage as any for Harvick to exact his revenge, as Elliott is the two-time defending winner.

The track layout is a 2.28-mile, 17-turn circuit that uses both the Charlotte Motor Speedway road course as well as a portion of its oval. It's been a challenging circuit since Speedway Motorsports created the course and all three previous runnings have been marred by both comical mistakes and sloppy driving.

Hamlin, the driver Harvick once messed with headed onto the track for practice just because Hamlin criticized Harvick's team, doesn't think anything will happen. Not at Charlotte or anywhere else.

“You look back at the (Bristol) incident and I don't know how you blame anyone for anything. It was a racing thing,” Hamlin said, dismissing the fact that Harvick has never been known as someone to back down.

“Define winning or losing,” Hamlin said. “Some people leave spats better than how they came into them.”

Elliott is the 23/10 favorite to win the Roval, according to FanDuel. ... A third consecutive win at Charlotte would be an eighth road course victory for Elliott, tying him with Tony Stewart for second-most in NASCAR history. Jeff Gordon is the all-time winningest driver on road courses with nine victories. ... In three starts on the Charlotte road course, Elliott has not finished lower than sixth. ... Daniel Craig, two days after the opening of his fifth and final James Bond film “No Time to Die” opened in wide release, will be the honorary starter. ... The race marks the 750th career Cup start for Harvick.

WDUN will carry live PRN Radio coverage of Sunday's NASCAR Cup Series Bank of America 400 from the Charlotte Motor Speedway infield road course, at 1 pm on 102.9 FM, AM 550 and streaming live on AccessWDUN.