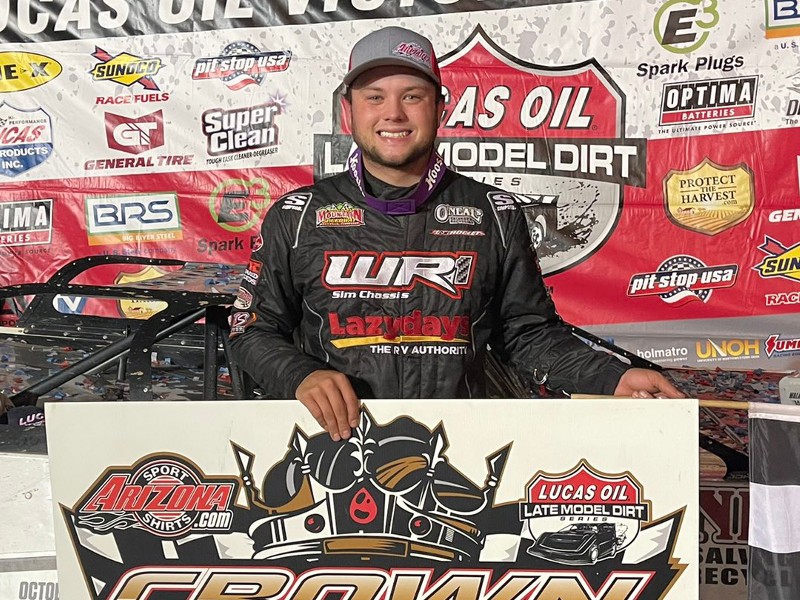 Hudson O’Neal joined his father, Don as a winner of the Pittsburgher 100, claiming the $20,000 victory in the 33rd annual event on Saturday night at Pittsburgh’s Pennsylvania Motor Speedway.

O’Neal tracked down race-long leader Earl Pearson, Jr., passing him for the lead on lap 93. O’Neal then pulled away for the win. His father Don is a two-time winner of the race in 2017 and 2019. Pearson had led from the onset of the race as the four-time series champion was looking for his first series win since last July. Pearson led the first 92 laps the 100-lap event.

Pearson was in control for most of the race, racing unchallenged for the lead even through a lap 50 caution for a fuel-stop. Even after the stoppage Pearson held the lead. O’Neal, who had brought out a lap 54 caution for a shock adjustment, charged from the back using the inside of the half-mile track.

O’Neal caught Pearson coming off turn two. As the duo came off turn four, O’Neal made the pass which turned out to be the winning move, as he went on the win his third 100-lap race of the year.

O’Neal solidified his second spot in the championship point standings behind McCreadie heading into a three-race weekend in Tennessee and Georgia next weekend.

“I’d rather be lucky than good. I wasn’t really good enough to win the race, “ said O’Neal. “Spencer (Hughes) had gotten around me on the bottom there one time. He got a monster run down the frontstretch. I thought ‘well all right,’ so I went down there and made the same kind of ground. I just happened to hit it good one time. It took a while to finally hit it. It was really, really easy to miss. I just kept trying and it finally paid off. I was just in a better part of the racetrack than Earl was. He got away from me a little bit on that restart.

“I knew he (Pearson) was going to get his tires hot before mine, because I was in the brown. After about ten laps I started driving back to him. I can’t believe it. We will take one anyway we can get it. We have got to get a little bit better for the next time. Overall, we are just happy to be here, and we took advantage of the situation. We talked about it under the fuel-stop. I had to stay out for that restart because I was the lucky dog and had to stay out on the racetrack to get it. I ran a couple of laps, and I just wasn’t really good. So, I brought the caution out and I pitted, and my crew made the right adjustments.”