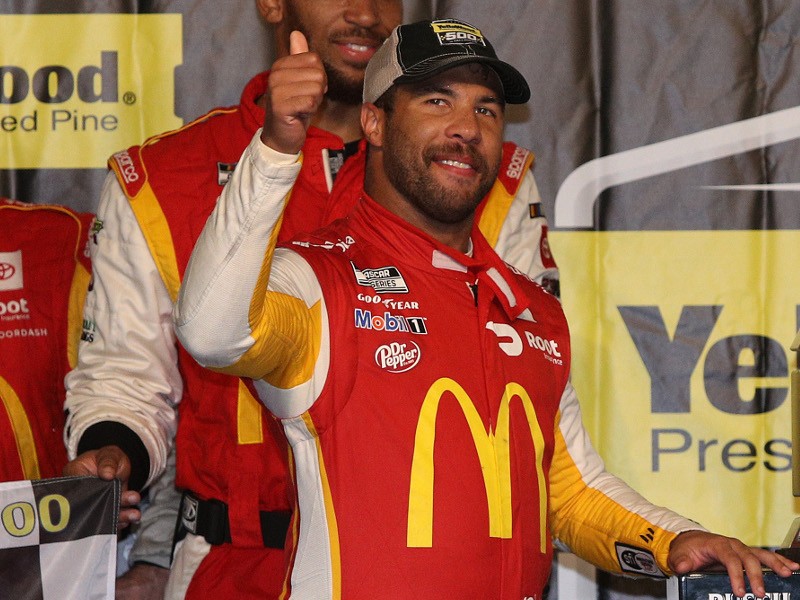 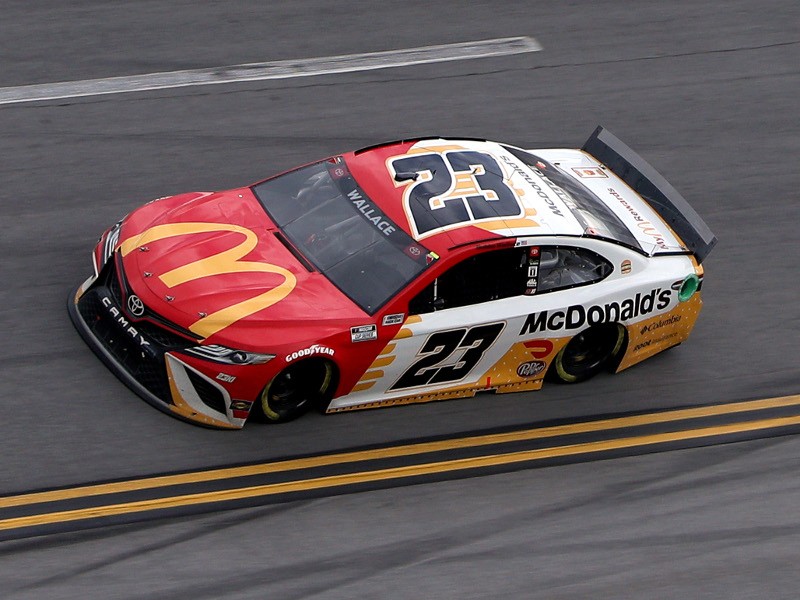 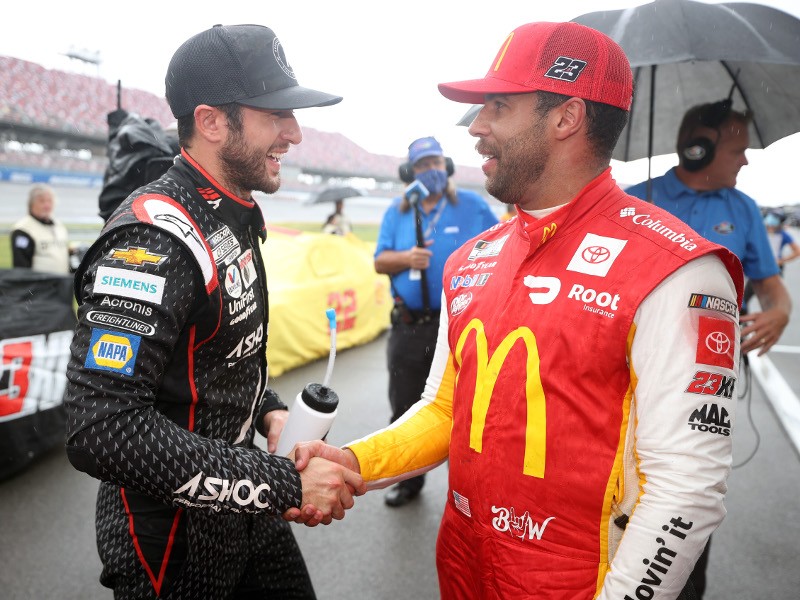 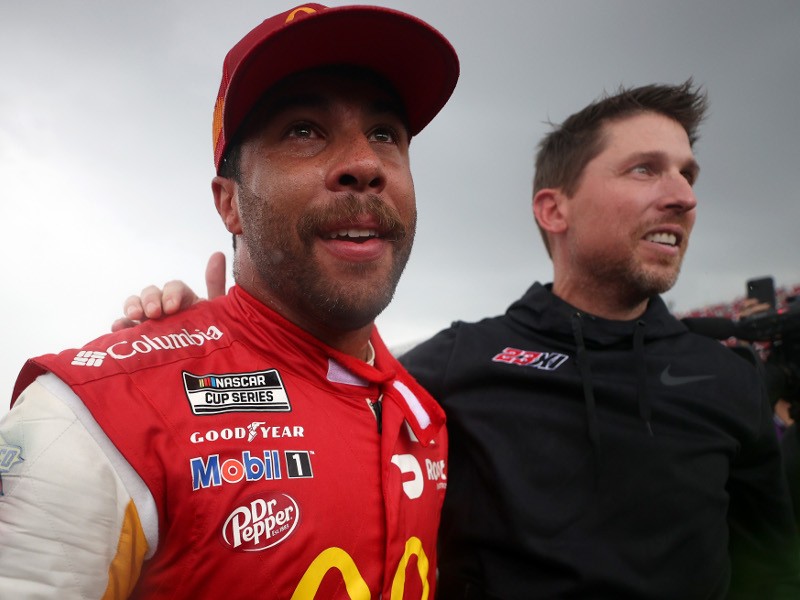 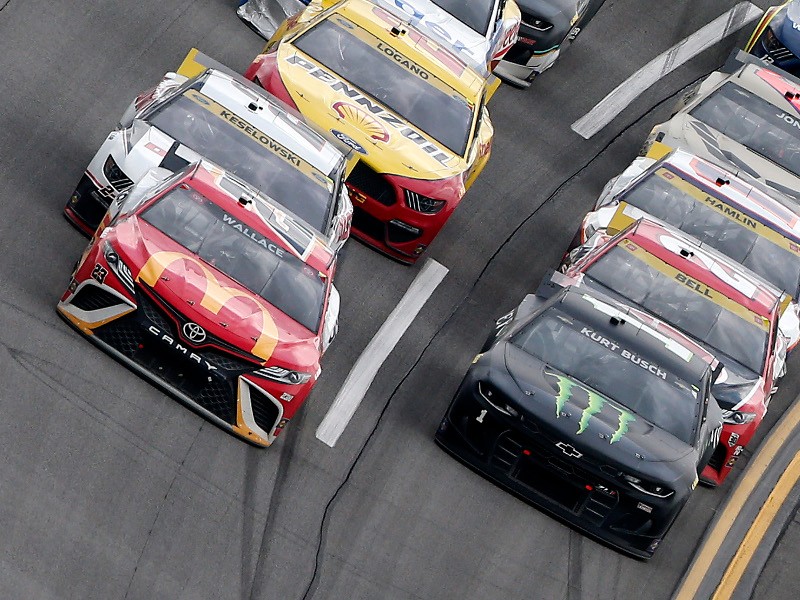 With weather threatening over the Talladega Superspeedway, Bubba Wallace was doing a rain dance when he surged into the lead on lap 113.

It paid off after a caution for a crash on lap 115 turned into a red flag for rain just two laps later, as NASCAR officials called the race official due to the weather, giving Wallace his first career NASCAR Cup Series victory.

“Part of me is just sitting there waiting – it’s not over with. Just sit there and bide our time and if we go back racing, let’s put ourselves in position,” said Wallace. “So many cool fans behind us at the pit box just cheering for it to rain so that kind of amped up the intensity a little bit. Just so proud of everyone at 23XI Racing”

Scott was unable to enjoy his win, as race officials initially gave the win to Buck Baker. The win was not awarded to Scott until well after the fans had gone home.

That was not the case for Wallace. The Mobile, Alabama native got to celebrate his first career win in front of a home state crowd.

“I never think about those things, but when you say it like that, it obviously brings a lot of emotion on and joy to my family, fans, friends,” Wallace said. “It’s pretty damn cool. Just proud to be a winner in the Cup Series.”

It’s the first time in NASCAR history that there have been three first time winners at the same track on the same weekend.

It also marks the first win for 23XI Racing. The team, in their first year of operation, is co-owned by NASCAR driver Denny Hamlin and NBA legend Michael Jordan.

“It’s way more emotional because I just know that these guys just have worked so hard over the last 10 months to put this team together,” said Hamlin. “We’ve just spent a lot of hours putting this together and it’s great to see the results from all the hard work from these team guys.”

“We had an awareness of the weather,” said Barker. “It looked like there was potential weather about halfway. How can I say this? When that didn’t pan out, then I came and we got four tires. We got four tires. I told him at a certain point, ‘Look, we need to get this far, this many laps in, then I’m going to turn you loose.’

“That’s pretty much what I said. I said, ‘You’ve done what I asked you to do, you’ve been smart, now go after it.’ That’s when he flew.”

With the prospect of it taking at least two hours to dry the track, which would run into darkness and more showers in the area, NASCAR made the call to end the race with 71 laps left to go.

The race, which had been pushed by rain on Sunday to Monday afternoon, was official after the halfway point, lap 94 of a scheduled 188.

“It means so much. I’m just very appreciative of the opportunity to be where I’m at,” said Wallace. “I have my Mom on the phone right now and I’m ready to hear her voice. It’s the thing you never give up on. My Mom and my parents have always pushed me to be the best that I can be and do the best that I can and whatever happens, happens. We’re here in victory lane at Talladega.”

Wallace was shoved to the lead off the front bumper of Brad Keselowski. Once he got out in front of the pack, he moved from line to line, blocking any run that came as the field knew they were racing against the weather.

The situation boiled over on lap 115, when Ryan Preece’s car became unstable after a push from Chris Buescher on the backstretch. Preece spun into the outside wall, gathering off Playoff contender William Byron and Matt DiBenedetto in the process.

As the field moved around the track under caution, the skies opened up for the second time on the day, with the race having been stopped on lap 74 for about 20 minutes due to rain. That opened the door for Wallace’s historic win.

“Words can’t describe it,” said Wallace. “I never really paid too much attention to it because I didn’t want that to be the winning focus and I just want to go out and drive and be a driver and compete with all my competitors out here. This is what happens when we can focus on just going out and competing and being a driver.”

The race was a back and forth affair, with 35 lead changes among 19 drivers over the 117 laps that were completed on Monday, with Kevin Harvick pacing the event the most, leading five time for 16 laps on the day.

It was expected to be an up and down day for some of the Playoff drivers, but no one was hit harder than the four Hendrick Motorsports teammates.

It went south early for Kyle Larson, who came into the day as the points leader, but was caught up in a crash on lap 56. It occurred when Justin Allgaier spun off the front bumper of William Byron in the tri-oval, sending Allgaier spinning up the track and into Larson.

Larson’s car was left with severe damage. After making repairs, he was racing hard to get up to speed when a right front tire blew on his No. 5 Chevrolet, sending him into the wall and causing more damage.

Larson would soldier home to a 37th place finish, four laps down to the leaders.

Alex Bowman was racing with the leaders when contact from his teammate, Chase Elliott to the back bumper of Ricky Stenhouse, Jr., sent Stenhouse into Bowman. That contact sent Bowman spinning head on into the outside wall on the backstretch. Several other cars were gathered up, including Ross Chastain, Kyle Busch, Tyler Reddick and others.

Bowman’s car was sidelined with heavy damage. He was credited with a 38th place result.

William Byron’s day ended with the final caution of the race, as he was part of the Ryan Preece crash and would be credited with a 36th place finish.

Elliott raced inside the top 10 all day, but has been shuffled back to 18th when the race was called.

“I just got into the wrong lane there in the closing laps,” Elliott said. “Once that got sorted back out, I didn’t have a ton of options and we just ran out of time with the rain.”

Larson now sits in second in the points standings, 19 markers behind Hamlin. Elliott is now tied with Kyle Busch in seventh, just nine points ahead of the cutoff. Byron (11th) and Bowman (12th) are outside of the cutoff going to the Round of 12 cutoff race next weekend on the Charlotte Motor Speedway infield road course.

It was a better day for other Playoff contenders, with Brad Keselowski finishing in second and his teammate, Joey Logano, in third.

“Gosh, if I would have known it was gonna rain right then I had a move I could have made and I was like, “No, we’ve got five laps in the stage left, I don’t want to burn that move yet,’ and then it rains, so I feel like I kind of let one slip away here,” said Keselowski. “All in all, it’s still a great day.”

“Brad and I work so well together at these superspeedways, so once I found his back bumper I was like, ‘Here we go,’ and we freight trained it towards the front,” said Logano. “He had a run into one. He could have taken it. He didn’t take it and that might have been the difference in winning or not, but, I think we’re second (later revised to third) so if it rains out, considering our situation in points, I will be very happy and walk out of here.”