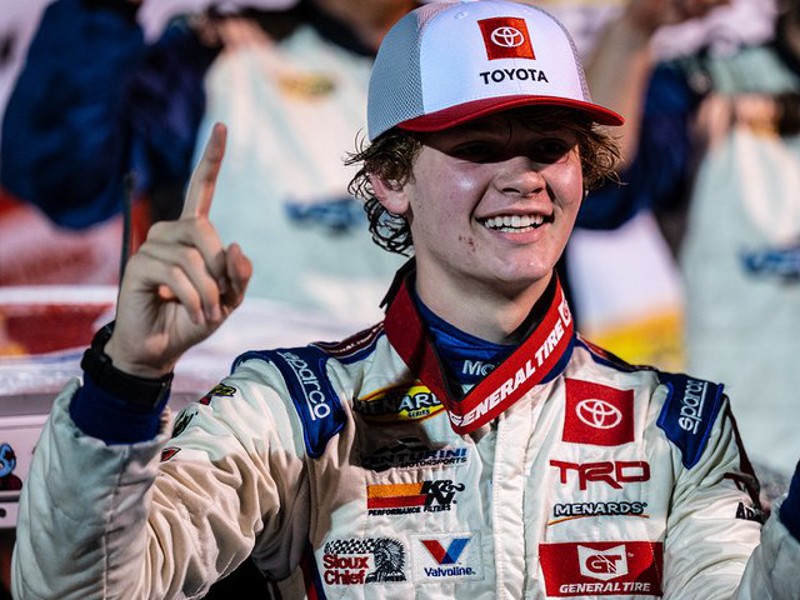 SALEM, Ind. - The first 155 laps of Saturday night’s Sioux Chief PowerPEX 200 at Salem Speedway looked familiar. Ty Gibbs had led every circuit and appeared to be cruising to what would have been his 11th ARCA Menards Series win of 2021.

Jesse Love had other ideas.

The 16-year-old driver of the No. 15 Toyota for Venturini Motorsports muscled past Gibbs on a restart with 45 laps to go, and Love successfully held off the No. 18 Joe Gibbs Racing Toyota for the remainder of the event to pick up his first ARCA Menards Series victory.

“We weren’t quite the best in the beginning, but at the end of the race, we were the best car on the race track.”

Added Gibbs of the last green-flag run: “I felt like we just got too tight. I chose the bottom (on the final restart). I felt like it was going to be the better call on newer tires, the shorter way around, with more grip.

“I just messed up. We got in the dirty air, which kind of made it even tighter.”

Gibbs may have finished second despite leading a race-high 155 laps, but the night was not a failure for the 18-year-old. He won the 2021 Sioux Chief Showdown championship by 22 points over Corey Heim.

The Sioux Chief Showdown is a 10-race series within the ARCA Menards Series schedule that allows East and West Series drivers a chance to compete for a title against ARCA Menards Series drivers on road courses and short tracks. Gibbs won this year’s championship on the strength of his six victories in Showdown races, almost all in dominating fashion.

Gibbs led 153 of 200 laps in the Showdown opener at Toledo Speedway in May. He led 35 of 42 laps en route to his win at the Mid-Ohio Sports Car Course in June. He led all but one lap at Iowa Speedway in July.

He led only 30 of 205 laps in his win at Indiana’s Winchester Speedway in July, but he followed that by leading every lap at the Milwaukee Mile in August. In the latest Showdown event prior to Saturday, last month at Bristol Motor Speedway, Gibbs led all but three laps.

And while he took the Showdown title at Salem, Gibbs might have also clinched the 2021 ARCA Menards Series championship. It will depend on the car count for the Oct. 23 series finale at Kansas Speedway.

Gibbs’ second-place run at Salem left him with 996 points on the season, 33 more than second-place Heim entering the season finale. There’s a strong chance Gibbs will simply need to start the Reese’s 150 at Kansas in a few weeks in order to win the overall title.

“Just keep focusing,” Gibbs said when asked how he’ll approach the finale. “Doing the best I can off the track to be prepared for the race weekend in Kansas.”

As for Heim, Love’s VMS teammate in Saturday night’s Salem race, a seventh-place finish tied his worst result of the season in a crucial event.

“We had a pretty unique issue tonight,” Heim said. “Can’t really name exactly what it was, but struggled for the first three quarters of the race, and then put four tires on at the end. I really thought we were the best car there at the end, but obviously we had nothing to show for it.”

“I struggled in practice,” Caruth allowed after the race. “To be able to get up to third, I feel like it’s pretty good. It is annoying to see (Love and Gibbs) get away there. I was doing everything I could. But to finish third is not that bad.”

Will Kimmel and Gracie Trotter finished fourth and fifth, respectively, at Salem.

The ARCA Menards Series season finale at Kansas is scheduled for Saturday, Oct. 23.